I just realized that the last time I showed my Tempest Island dimension was almost one year ago.

I did not add too much to the main rooms on the lower floor of the house. The kitchen got a little kitten and some more bottles, mugs and the like. The stove got some control “knobs”. The backside of the stairs, which is supposed to be my storage area, hasn’t gotten anything new. I did add a table to the living-room corner, though. It should be a comfortable and cozy atmosphere where you can sit down and read a book after being outside trying to save the world all day. On the terrace, I changed the position of the chairs, so everybody eating out there can look at the ocean. Because really, if you had a house like that, would you really want to sit there and stare at the wooden walls of the house? I also added more food and more plates. It did take me a long time to get my hands on more plates, actually. They belong to a special kit which can only be bought during a special holiday (I think it was Rift’s anniversary holiday). I don’t think I will ever understand why such basic things such as dinner plates are so rare in this game. 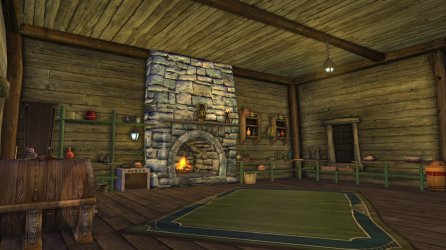 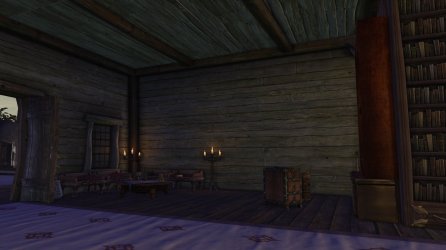 I had thought about adding walls and more rooms upstairs but I wasn’t really sure what to do with those rooms then. I imagine my little dwarf lady living in that house and having friends over regularly. So maybe one guest room would be nice. Other than that, she still has the corner with her bed. Instead of several little rooms, I decided to give this part some functionality. My dwarf is rational enough for that. :p So, you now find target dummies up there which you can actually interact with to test new builds or just practice your skill rotation and/or new macros. There is also a target dummy that you can use to practice healing. I also like using the dummies to see whether my cooldown addon is tracking the correct spells. I also added several weapon racks. Hey, she is a dwarf, after all! You’ve got to live that stereotype to the fullest! And I placed some chairs, a little table, beer mugs etc., so my dwarf can have visitors and friends watch and give her feedback on her fighting skills or practice a bit themselves. Again, functionality paired with comfort. :p

The outside of the house has always scared me and still does scare me. It’s so huge and I still have no idea how to properly fill it! I decided to place a few trees and stones and leave the rest of the island blank. She is slowly expanding her realm, but it will grow over time whenever I get an idea. One big addition is the crafting corner. Again, I decided to combine functionality with looks. ;) Trion added crafting stations for dimensions, so I gathered my platinum and bought some of those. Since you can get into your (or your alts’, your friends’ or your guild mates’) dimension whenever you want, it is very convenient to have something like that.

I mentioned the kitten above. This is another thing that Trion added at some point: Stationary NPCs. They do move around a little bit with some animations as well, but only in a very limited area/circle. It makes sense, though. We can add basically anything to the dimensions and there would be a ton of clipping issues if the NPCs tried to wander along. The kitten on the beer keg would “walk” in the air if her area of movement would be any bigger than it is. But this way, she actually stays on the keg at all times. I decided to also add a “caretaker” kind of NPC for Meffanda, a little Bogling. He has his own fishing boat now and a little hut right next to the house with the crafting stations. We’ll see if maybe he will also get a little garden to grow some vegetables or something like that. He does look like the kind who would do that and who would enjoy having some vegetables together with the fish he caught. 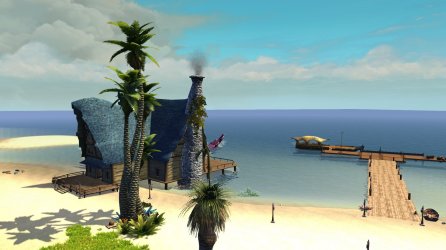 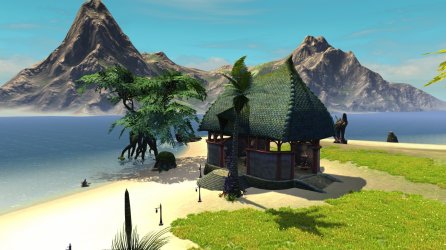 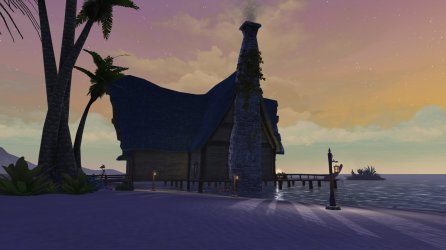 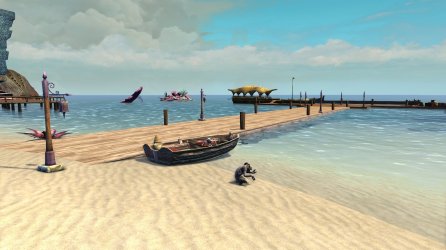 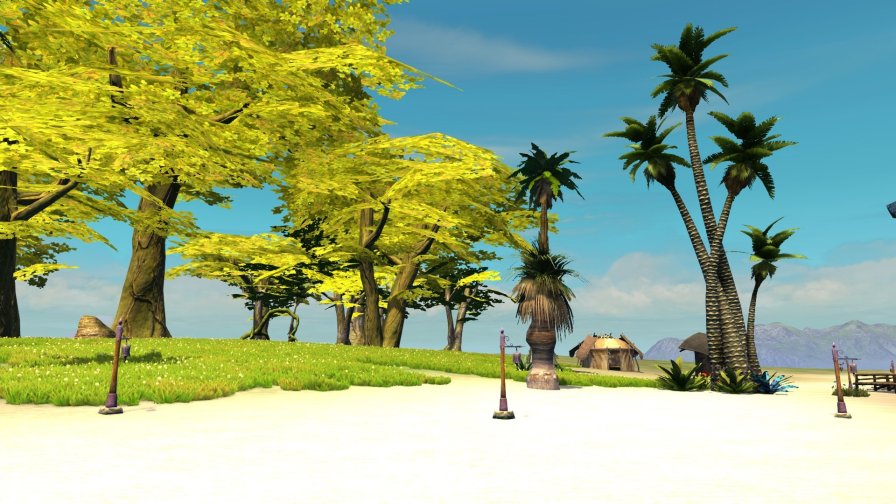 What I always find fascinating is that you can hardly ever find bathrooms in MMOs. Where are the showers? The toilets? So I took a look at other people’s dimensions – at least those who also added homes like I did. Several had bathtubs added, but I only found two with added toilets. I have a little outhouse in one of my other dimensions, but nothing like that here yet. I added a little building and placed a closed door in front for now. You can only guess that this is supposed to be a toilet, though. I’ll have to think about this building a bit more and how to build the actual toilet. Of course, there are no premade toilets here (as a side note: There is a toilet in Wildstar which you can buy for your housing plot!), so I will have to build one myself combining other items. I do have a shower, though! I am just not too happy with its look yet, but I’ll work on that. 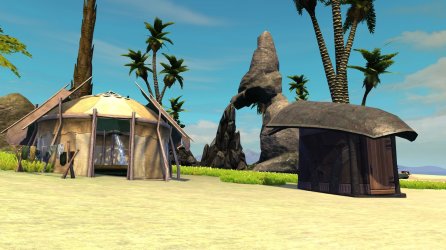 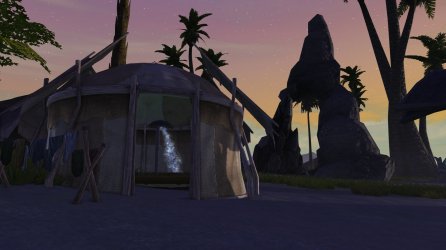 I have less than 500 items placed so far. 1000 is the current maximum, but I can upgrade it to 2000 (with platinum, thankfully! :p). So there is still a lot of room for improvement, quite literally. :)