I know I am ranting about the same topic over and over again: The player housing feature in Lord of the Rings Online is just disappointing. They have been improving it over the years, but even though I think every time “Now it’s something I can at least enjoy a little bit!” – as soon as I try to get into their housing, I hit another limitation and end up being frustrated. This is especially bad because I keep comparing it to Rift and Wildstar which both have and had vastly superior housing! But Wildstar is dead and Rift belongs to gamigo and… is on life support most likely.

I love the neighbourhoods. These are instanced maps with several houses on them that each belong to somebody (or are available to purchase). The houses themselves have an outside area which everybody can see when they are in that neighbourhood’s map and the houses are instanced. So you can, theoretically, purchase a house that’s right next to the house of a friend of yours. In reality, you need to find a neighbourhood with enough houses available, especially if you’re picky about where on the map you want to buy your house!

I love the design of the houses. Each area fits the given race so well! The hobbit houses look just like hobbit houses. And when you’re inside with a human, of course the ceilings will be really low. The dwarf area is basically a huge mine and it’s dark and everything is made out of stone. The premium house areas are also done really well. These cost you real money to buy a house there, but these houses are also much bigger than the regular ones.

As mentioned above, they have made improvements over the years. You can place so many more items in there now! And I remember a time where you could not place a table and a chair next to it. Instead, you had to decide for either a table or a chair. They also let you move a placed item… slightly. Maybe. In my case, I had wanted to place the pig in a blanket with its back next to the fence. But for some reason, this wasn’t possible even though every chance I made was within the range of the movement sliders. I got the “too far away from the house” error which doesn’t make sense. I had barely moved it! The sliders don’t even allow for a big range anyway, so that is even worse. It is not a bug but working as intended, unfortunately, and is apparently due to technical limitations. 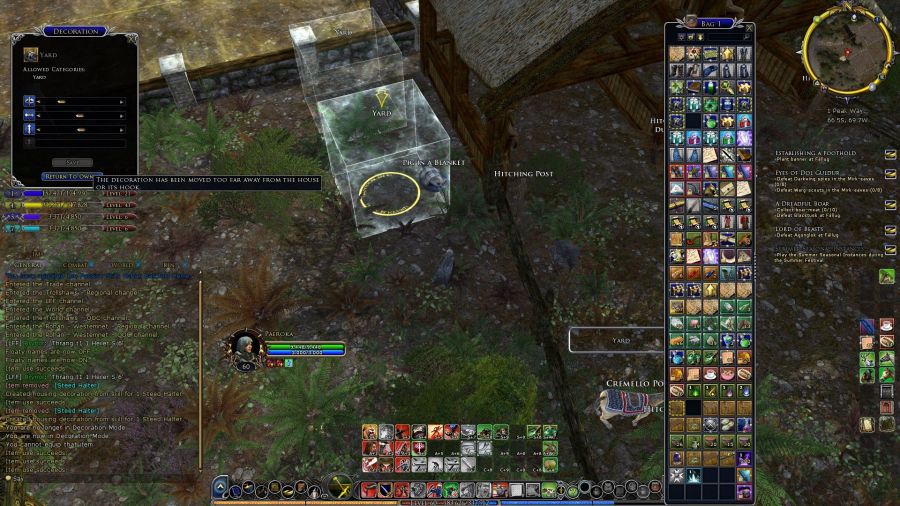 To give you more examples: The basement of my house has no ceiling hook which means I can’t add any lights to the ceiling, nor can I add a bat there because it requires a ceiling hook. And why do I get a rainbow ambience item that I can only place INSIDE a house?

But hey, if we compare it to MMOs that have done housing well, we should also compare it to other MMOs with no player housing… Guild Wars 2, for example. Because compared to that (no personal housing, only guild halls), I am happy to have something. Even though this something is super limited and just barely better than nothing…