I bought Project Highrise back in 2016 and have played it for 56 hours. This number seems oddly low as I thought I’d sunk in much more time than that. I also bought all of the game’s DLCs. So when I saw the announcement for Mad Tower Tycoon, I was a bit skeptical. A second tower-building game? At first glance, these games were identical only with different graphics. However, I love simulation games and I love this theme, so I kept looking at the game’s Steam page again and again. The main question I had on my mind was: How is it different from Project Highrise? Is it worth buying Mad Tower Tycoon when I already own Project Highrise? Do we even need two games like this? Why should I spend money on another game like this if it’s exactly the same? Except for the graphics, of course.

There has also been an interview (written in German as well as English) with a developer from EggCode Games and he was also asked how his game Mad Tower Tycoon differs from Project Highrise. It seems to be something a lot of people ask (also visible when you take a look at the Steam community forums).

Let’s start with a look at the prices and the developers behind these two games. MTT costs 19.99 €. The developer is called EggCode Games and you may know it from their previous game Mad Games Tycoon. The developer is actually based in Germany which I didn’t know until I looked at the website.

The base game of PH also costs 19.99 €. It also has one small expansion (Las Vegas, priced at 6.99 €) and four DLCs: Miami Malls, Tokyo Towers, London Life and Brilliant Berlin (price ranging between 1.59 € and 1.99 €). The developers are SomaSim. They are also indie developers and made 1849, a city management game, before they released PH. They’re based in Chicago, USA. Not that the country matters, but as I mentioned it above, I thought I should mention it for them as well.

The graphics are, as always, highly subjective. I like them in both games. And in both games, I am not a big fan of how the people look. In PH I find them too stiff and lifeless. In MTT they are too cute. If I had to choose one game over the other simply because of the graphics, I’d choose MTT. I can’t say anything about the soundtracks in both games, because I always turn off the music. But I’ve never heard somebody say that they bought one game and not the other because it had a better soundtrack. So, I’d say while the first can be a deciding factor, it’s something you can decide by looking at videos and screenshots and the other isn’t that relevant.

I haven’t experienced any bugs or crashes in either of these games. Both seem to be very stable, at least on my PC.

One of the main differences that you will encounter first is that PH has more micro management in general. I’ve seen people call MTT more “arcady” and I guess they’re right. In PH, you put wiring and plumbing closets on each floor. Then you place pipes and lines on each floor where they’re needed. Both games require you to place rooms that produce enough electricity, water, etc. But MTT leaves it at that and connects everything automatically. In PH, if you run out of money before finishing the electrical lines, your tenants are without electricity (if you were silly enough to request the tenant before finishing that part). Also, your tenants have specific needs. You may rent your office to insurance companies which only require electricity and copy services, or you choose an accounting company which also wants courier services. Later on, other tenants that offer a higher rent will also require more facilities and services in your building. On top of that, you will also unlock bigger offices later. And just when I was typing this paragraph, while starting a new tower in PH, an earthquake happened in-game and all tenants were without electricity. That’s within the first five minutes into the game.

Another big difference is the transport system. In PH, you build elevators and the people stand in front of one, disappear and reappear on their chosen floor – a bit like a teleporter system. In MTT, they also stand in front of one, wait for it to travel back to their floor, get in and then you can see the elevator move to their chosen floor. In other words: If there are people waiting on different floors, it doesn’t matter in PH while it does matter in MTT. An elevator that is full won’t transport more people and they need to wait for it to move to their floor. You build the elevators (and the stairs) in front of rooms, though, so you can add more when you need to. On the other hand, they cause noise and not everybody is happy having an elevator or stairs in front of their room. Careful planning is still necessary here!

When it comes to building, in PH you build a floor and stairs or elevators, then add what kind of rooms you want on that floor (and add the lines for electricity etc. as already mentioned). Once it is built, you click on the room and choose a tenant. Rent varies depending on what tenant you choose, but they all have different needs and expectations that need to be met. In MTT, you directly build what you want there, e.g., an office, without having to first add the floor itself. The construction workers still need stairs or elevators to get to the construction site, of course. Once it’s built, some tenant will automatically move in there. You have no control over which tenant. A small office is simply a small office.

What I don’t like in PH is the interface. Not everything is bad here, but I frequently get lost trying to find some item I want to build or trying to remember what I need to do in order to unlock something for my tower. I wish they would condense the options somehow – although it may be less of an issue if I played the game more regularly. You also need to open the utilities report in order to see how much of the available electricity etc. you’re using. In MTT it’s part of the upper tool bar. You also get more horizontal building space in MTT which I like.

PH and MTT both let you freely build a tower in sandbox mode or play scenarios/missions. PH also has mod support which lets you download ned items for your tower. I always forget about that, because I’m not using any mods here. It seems that MTT won’t get mod support. What you currently get for your money: A very complete game with PH, but some features only come with the paid DLCs. MTT, on the other hand doesn’t have any DLC. It also doesn’t have mod support. 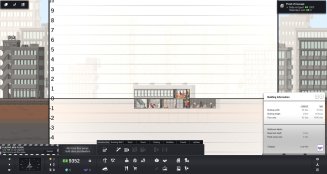 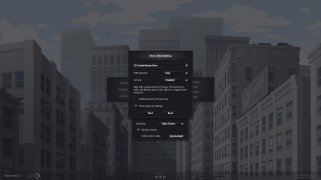 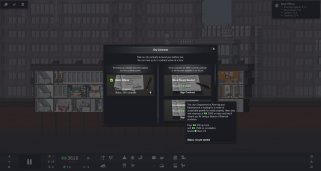 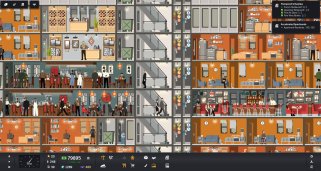 So, these are the main differences in my opinion. PH has more micro management in general (I left out some features like booking singers for a concert etc. in your tower as it’s part of DLC) than MTT. MTT is more realistic when it comes to elevators and stairs, so their micro management is in getting your visitors and occupants to easily navigate around in your tower.

If I could choose only one game and wasn’t allowed to play the other ever again, I would probably choose Mad Tower Tycoon (but only then and it’d be a difficult decision). Not because Project Highrise is a bad game or even worse than Mad Tower Tycoon, but because I slightly prefer the graphics and so far, prefer the focus on the transport system instead of having to take care of the wiring for my tenants. Project Highrise is the older game, though, and has more content which may lead to a better long-term investment when looking at entertainment gained per Euro spent. I also quite like that you can choose tenants and their specific needs.

I hope this helps anybody who may ask themselves the same question: Should I buy Mad Tower Tycoon or Project Highrise (or both)? Also, feel free to ask any questions about the games. Maybe I can answer them. :)

Disclaimer: I am not affiliated with any of the games mentioned here nor with Steam, Fanatical or any other game stores. I bought all games with my own money and am not getting paid to write about the games. My opinion is my own (and if I ever start disliking these games, you’ll be the first to hear it)!