Ulisses and their partners announced a new computer game today: The Dark Eye – Book of Heroes. It seems that Wild River will be the publisher. The game is developed by Random Potion, a Finish company. I haven’t found much about the developers as it seems that they haven’t yet finished any games. But this press release from March 2018 about their game concept “Project Scoundrel” sounds as if that is the basis of the game Book of Heroes.

Update (August 11): Wild River now has a website with a tiny bit of information about the game. Even though it’s going to be released in English and in German, the website appears to be German-only.

We don’t know a lot about the game yet, but we have been shown a few scenes from the game. It will be a single player game that can also be played with friends. So multiplayer will be in and it may be an important part. What they said was that they want to bring the tabletop feeling into the computer game. I especially like the part in their game concept’s press release about being able to avoid combat by other means. The Dark Eye is heavily focused on interaction and while yes, combat is obviously a part of it, the whole interaction – with NPCs, but also with the characters your friends are playing – is the whole foundation of the game. 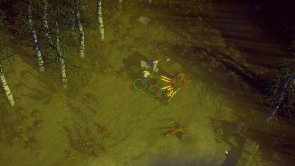 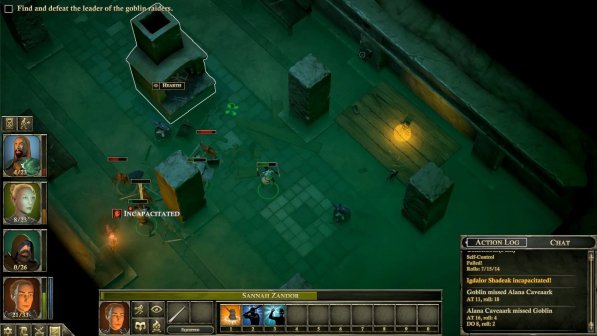 They said that they would upload the video to their YouTube channel later, but in the meantime, you can also watch the video on Twitch. The part about Book of Heroes starts at about 2:16:00. Parts of it are in English, so just continue watching and ignore the German when you hear it. The (very short!) gameplay video starts at 2:19:25. The big text on the image above says “with your own story”, by the way.
In case you have no idea who Ulisses are or what The Dark Eye is all about: It’s a German pen & paper game that was published in 1984. Think “Dungeons & Dragons”, but with less of a focus on combat. Some adventures are all about socializing, getting information that way etc. Or, you know, you’re just there to find a dog that ran away (well, as part of the adventure, at least!). You can easily play a character that can’t fight and are still a viable asset to your group! Just to give you an idea. Your character could be very knowledgeable, for example, and get you to places where you couldn’t go if you were just a group of warriors. Now, I don’t know how much of this will be important in Book of Heroes, but since they say that they want to have the soul of TDE in the PC game, they can’t just be all about combat and nothing else.
Some additional info we got: There will be 12 classes in the game to choose from and all 4 common playable races (human, elf, half-elf, dwarf). I already mentioned that the game will have a single player mode which lets you hire henchmen to accompany you. And then there is the online coop mode which lets you play with up to three other players. The developer team consists of ten people at the moment. They hired Winifred Philips for the soundtrack who’s also worked on games like Assassin’s Creed, Total War and Little Big Planet. The guy from the publishing company said that they have a budget set and a deadline and they’re trying to keep everything in the scope of that.
The audience also got to ask a few questions: One was about the game’s genre to which the developer replied that it is “dungeon-crawlish”, but less focus on combat than you’d usually have, and instead also puzzles or tasks you’ve got to solve. It’s not an open world game, but instanced. You’re sitting in a tavern and then go on single adventures. That is, you click on a region on the map where you want to do an adventure. They stress again that the point of the game is not to run from fight to fight. But of course, there will be fights! It’s apparently rather balanced between fights and other tasks. The game is basically the “dungeon master” for you and your group. An adventure can last between one hour and three hours. But this is all in development, so it’s not set in stone yet and they can’t say which adventure will be the shortest or the longest. Parts of the game will also be canon or become canon later on, but not everything will be. Another question was whether there’d be a level or map editor for players to create their own adventures. The developer replied with “no”, the publisher said “not now”. Basically, their plan is to release this game now and continue with other games set in the world later on. The fights in the game will be in real-time, not turn-based. The game will be German and English when it launches. If other languages are added depends on the success of the game. The last question was about monetization of the game (this is when the audience starts to applaud): You will buy the game, then you will own it. There won’t be a cash shop or anything like that added.
Book of Heroes will appear on Steam at the end of August, but the game won’t be released before 2020. In Q2 2020, to be more precise, as one of the guys on the stage later specifies.
I am not sure yet whether I’m excited or not, because I’d like more information first. But I am carefully optimistic, at least. I’d just really like a good PC game that captures the spirit of the game well. That is, I want a rich deep storyline with meaningful choices. So, we’ll have to see…