I admit, I had actually forgotten about this game in the meantime. My last turns happened in November 2020. But of course, I am happy to see it go on!

So, in case you have no idea what I am talking about: Naithin had the idea to start a Civ VI succession game. The rules, short and sweet (you can read all of them here): We’re playing the Civ VI base game without expansions or DLCs, so all participants can play. We have a player order which determines who gets to play after whom. When it’s your turn, you play for 10 turns and then the next person takes over the game and continues.

You can follow the game progression in each of our blogs! Please see Naithin’s post about the game for the links to all previous blog posts as he seems to be keeping track there. And in case you want to play along and see how your version of our game develops, you can find the save games here.

As always, I have not read any posts about our Civ game since I had published my last one. Over this span of time, I am sure I would have forgotten the posts’ content anyway. But I also like reading everything in one go. If you are up to date: Skip below the horizontal line!

Krikket started off with the plan to focus on the space race! We apparently have almost all technology researched, so she started research for one of the three missing ones. UnwiseOwl traded with France for some more tourism for us and started a research agreement with Egypt. We also now have a destroyer on which our Great Admirals were used. Rambling Redshirt worries about spies within our borders. That thought hadn’t even been on my mind, but now I’m starting to become paranoid. And Gilgamesh is anything but sneaky as he apparently moved some troops towards our borders. We have accomplished the moon landing now, but don’t have much industry, apparently. Our troops could be upgraded if necessary, so Gilgamesh isn’t a threat to us.

Naithin wonders whether a cultural victory would be faster than a science one. Interesting. He also gets to make an important choice (or so I think): Keep building the Hermitage wonder (11 more turns when he notices this) or stop that and switch to produce… something with our spaceport in Leeds instead… whatever is it that is needed to get us to Mars! He decides against a third spaceport and instead starts the construction of the Sydney Opera House which will give us more culture. Before he hands over the reigns, Naithin sets a few of our cities to work on research which will get us a Great Scientist faster which can apparently be used to rush our Mars project.

Rakuno is the last in line before I get to play again – he also notices that there aren’t any Great Scientists left to recruit. Bummer. So, Great Engineers it is instead! He mentions that other than the science victory (with Roosevelt close behind us) or the cultural victory (with France following), we also have the option of winning by points. Either of these victories would be fine with me as I have never made it to the late game in Civ VI. Rakuno starts the Space Hydroponics project which will take 41 turns to complete. I guess I won’t have to worry about any choices there. Roosevelt is catching up with us, apparently, and Rakuno asks us to carefully watch what he is doing.

Second turn: Roosevelt is angry because we attacked a player on their continent. Did we? When did that happen? Either I completely forgot something here or Roosevelt is extremely unforgiving as I only remember the war against Gilgamesh which was centuries ago!

Third turn: We can build something in London, but the options are very limited. Mars Reactor takes two turns to complete in Stoke-Upon-Trent, Mars Hydroponics will finish in 31 turns in Leeds and the third spaceport will finish in Eridu in 35 turns. Won’t it make more sense to start with Mars Habitation in Stoke-Upon-Trent then once that one is finished? I am feeling a little bit lost here. As Rakuno mentioned, both Roosevelt and Gilgamesh are ahead of us in recruiting a Great Engineer, so London will work on Industrial Zone Logistics as well. I’m adding a Theater District to Plymouth which takes a long time to build, but it’ll give us more culture, Nothing would have helped with science or the Great Engineer in this town.

Fourth turn: Amphitheater is finished in Ur. We have one archaeological museum and one art museum in other towns already, another archaeological one is being built in Norwich, so I choose another art museum. We can also build something in Adab. I go for the Forbidden City as it will give uns one more wildcard policy slot. I have no idea if that’s useful, but everything else seemed even less so.

Fifth turn: We launch the Mars Reactor! Mars Habitation gets started. It will take us another 26 turns to finish this one. I also get to fill in a wildcard policy slot. I’m going with Sports Media which gives +100 % Theater Square district adjacency bonus as well as giving a city +1 Amenity for a Stadium. I don’t even know if we have any.

Sixth turn: Pedro denounces us. The reason is jealousy as we have more Great People than he does. Well, we didn’t force them to come to us, did we? We have unlocked Social Media, so I get to change the policies again. It unlocked the Online Communities policy which does look useful: +50 % tourism output to civilizations to which we have a trade route. I’m putting that one in instead of Social Media. We have no Civics left to research, so just as with science, we focus on “Future Civic” now. I’m choosing to build the Cristo Redentor wonder in Birmingham. It can help with tourism points, so why not?

Seventh turn: I notice that there are no Great Engineers left to recruit. I choose to build a Broadcast Center in Norwich as that’ll help us with culture.

Tenth turn: I was just about to type here that I feel like we’re only waiting for the space projects to finish, when a cut scene appeared on my screen. This is it! We have achieved our victory. A cultural victory!

So, unfortunately, I cannot hand over the reigns anymore. This is the end of our game! It has been a lot of fun playing with all of you and I even learned a few things about the game here and there… okay, I actually did learn a lot about the game! 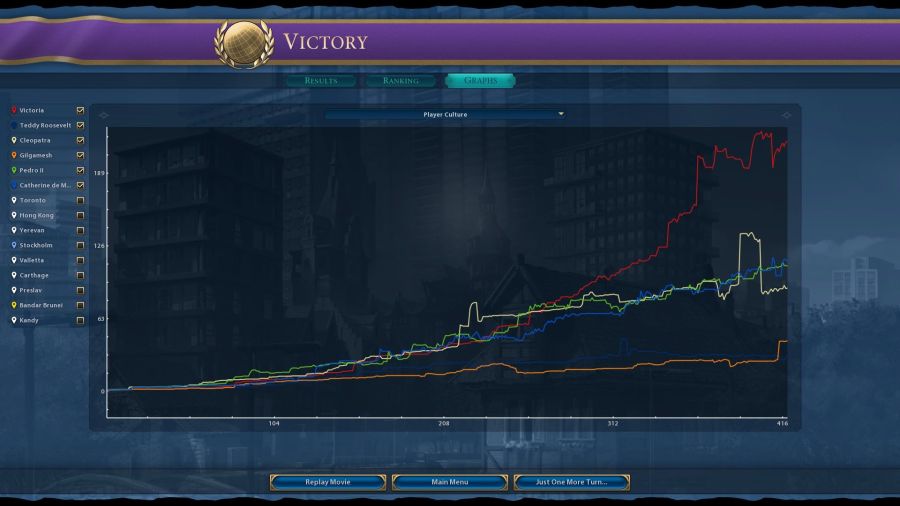