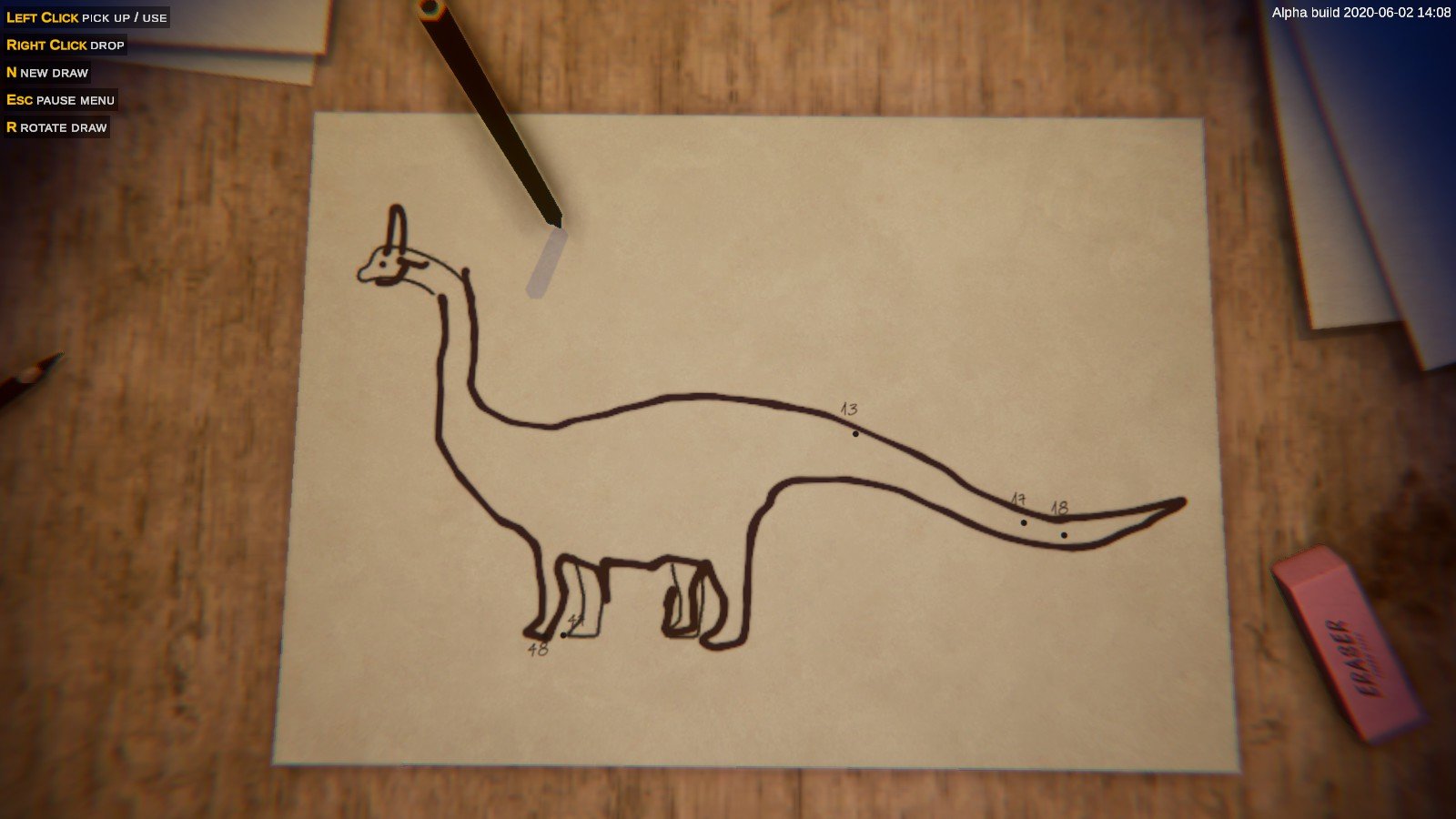 Steam recently hosted the Steam Game Festival which focused on yet unreleased games with their developers offering a demo of their game, doing AMAs and so on. I admit, I sometimes have a too short attention span and getting into a new game feels exhausting, especially after a day’s work. I limited myself to demos of games where there was something in the description that had caught my interest and where I felt that if done right, it could be a game for me. Some ended up on the last spots on my list, not because they’re necessarily bad, but simply because they’re not good for me! Of course, I will elaborate accordingly. But keep this in mind when looking at the rankings on the list.

Most of these are also super quick impressions because the Game Festival only ran for a week and there’s only so much free time to spend on new games – or games at all. The ones higher up on the list were also games that I’ve been playing a bit longer most of the time, if the demo allowed me to do so. Altogether, I have eight of these games on my wishlist, with four of these being added because of the Game Festival. That’s not bad for the developers, is it?

But for now, let’s first start with the games that did not make it onto my wishlist!

This is a simulation game where you play a paleontologist. It is also the only game demo I installed knowing it wouldn’t be for me, because it’s first person view only. I love dinosaurs, though! The beginning was certainly amusing as the character explains the story of his love for dinosaurs (and please do note how I cannot draw by numbers…). The main reason I won’t be bothering with this game is that I can’t play games in first person view due to my motion sickness. They promise to make excavating dinosaur fossils and preparing them for your museum realistic. But I am not sure there’d be enough gameplay there for me that I would find entertaining, especially given the fact that I can only play it for a few minutes before my simulation sickness kicks in. Still, I wanted to mention it because it’s definitely something unique! 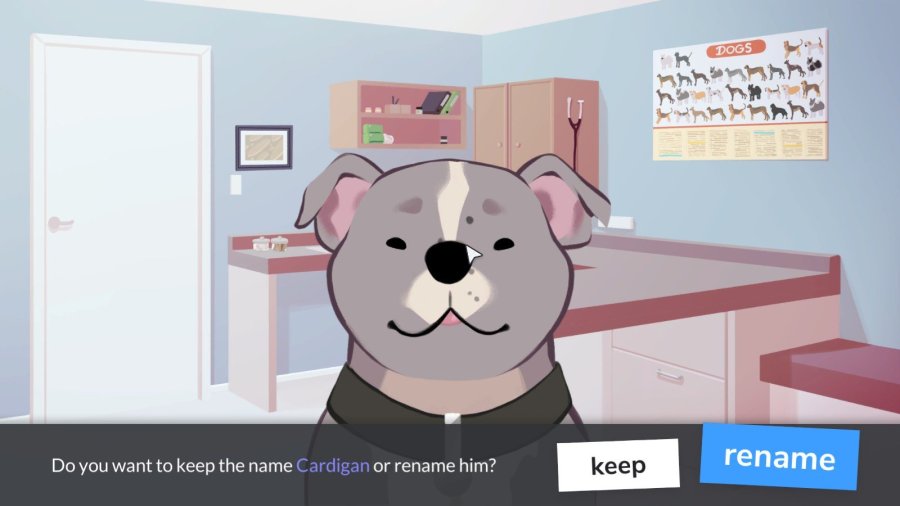 It reminded me a bit of the Tamagochi era when I was a teenager. Who remembers them? Best Friend Forever is a visual novel and dating sim. You get a dog and since this is your first dog, you also get help and guidance in dog communication and dog care. I think it’s great for children to learn about dogs. At the same time, it’s a dating simulator which may not be that interesting for children. I feel a bit bad putting the game this low, because I think it does everything really well! You instantly bond with the dog you chose and the characters all seem interesting, at least. I didn’t play it for long, though, because while I love dogs, I’m just not a fan of dating sims. And this is also why it’s this low! It’s not my kind of genre and I quickly lost interest in the game.

Krikket wrote about this game as well and she has a much more positive impression. So, if you like what you’ve read about the game so far, head over to her blog post about the game! 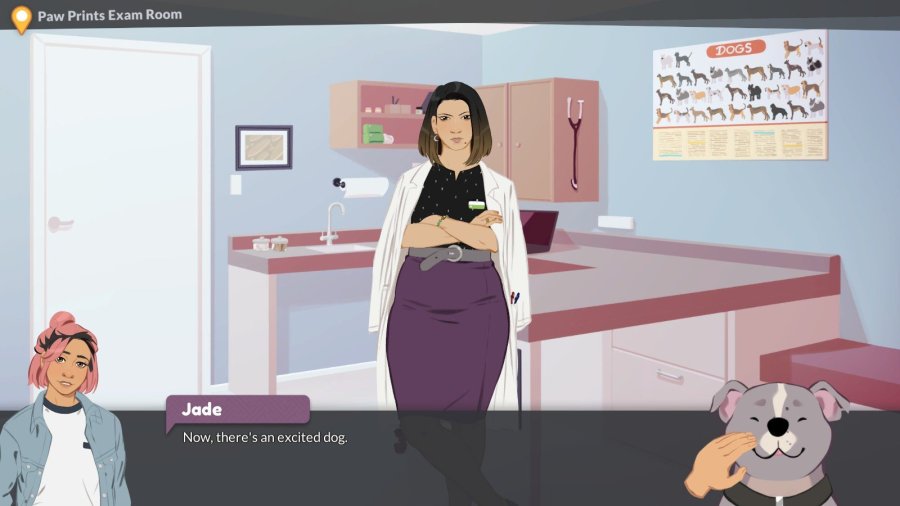 Another game by Pyramid Games. How many does this company have in active development at the moment? But here, you can switch between first person and third person view, so that’s a plus for me. But let’s first talk about what this game actually is. The developers tag it as an open world survival crafting game. Now, I don’t necessarily need the survival part, but open world and crafting sounds nice! Your goal is to colonize the planet. Despite the interesting theme and gameplay, my verdict isn’t a positive one: Of course, this is a demo and the game isn’t ready yet. But this is all I can judge on at the moment. So my verdict is that this game isn’t ready yet. While I could grab the boulder and move it pretty quickly with no issues, I had problems with other parts of the game: I couldn’t click on an item when I was in third person mode. Only after switching to first person did it work. The same happened when I tried to leave the crane. Hopefully, these issues will be sorted out during development, because other than that, it seemed like a fun game. 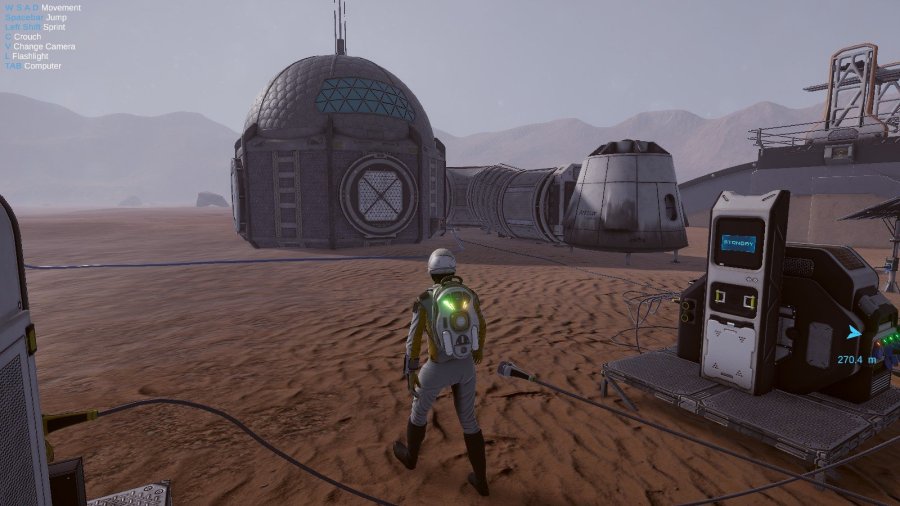 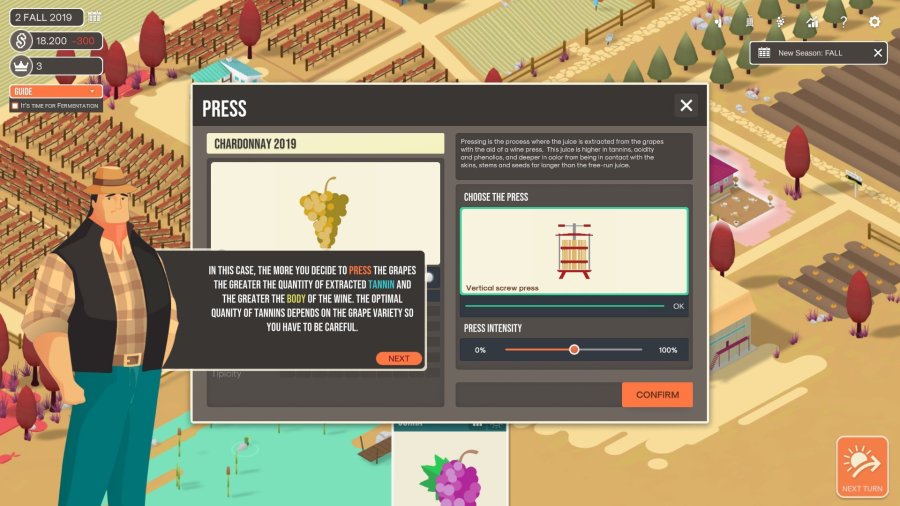 I really thought I would like this! I already have a game with a similar theme, Terroir, and because of this, I just couldn’t warm up with Hundred Days. It is a game that will teach you about wine-making. And I think here, it does a better job than Terroir. At least, there were more explanations and there was more text to read. But the gameplay itself is basically a puzzle game where you choose which actions you place on the game field so that as many of the available ones fit on there. I am not the only one who looked at the game and asked if it’s a puzzle game or a business sim. The replies from other players seem to suggest it’s not a puzzle game – so maybe I just missed the point here.

This is marketed as a “casual, text-based simulation RPG”. It’s got a very interesting and cool concept. You start up your PC to find an AI buddy communicating with you. He (I say “he” because I gave him a male name) asks you a few questions in the beginning and then you start playing a few games together. The fun part was that after these three games, my buddy told me that he had another game ready, but I had to restart the programme for it to work. And the buddy really meant that. I closed the game and restarted it for the new game to appear. Of course, everything is text-based with an old-fashioned graphics interfact. Very very old-fashioned – and very familiar to me. It was fun to play, but “casual” is the correct term. I am not sure if there’s going to be a plot to it or if you just keep casually talking to the AI while he tries to keep you entertained. It didn’t make it on my wishlist because I’m not sure how tiring it will be in the long run. It’s a bit exhausting to read the font after a while and and entering commands in order to advance. But it still is an interesting game and I’ll keep an eye on it to see what content it’ll have. 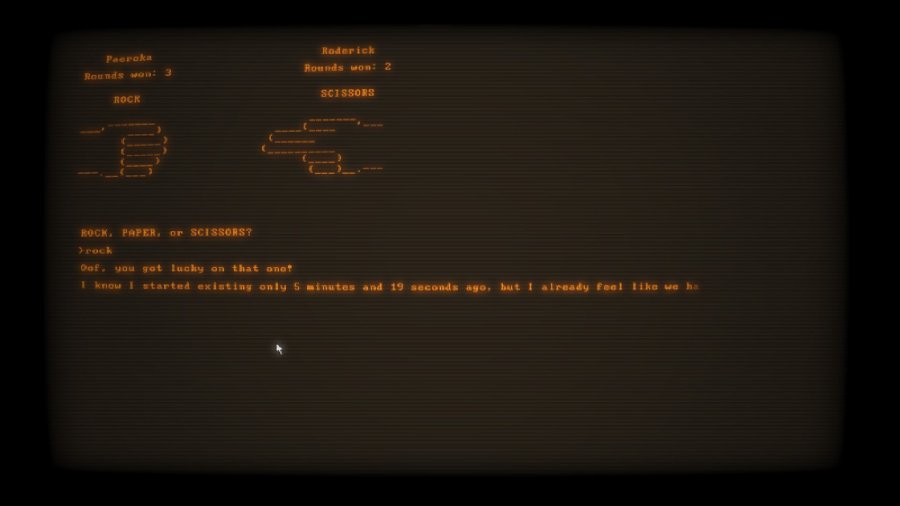 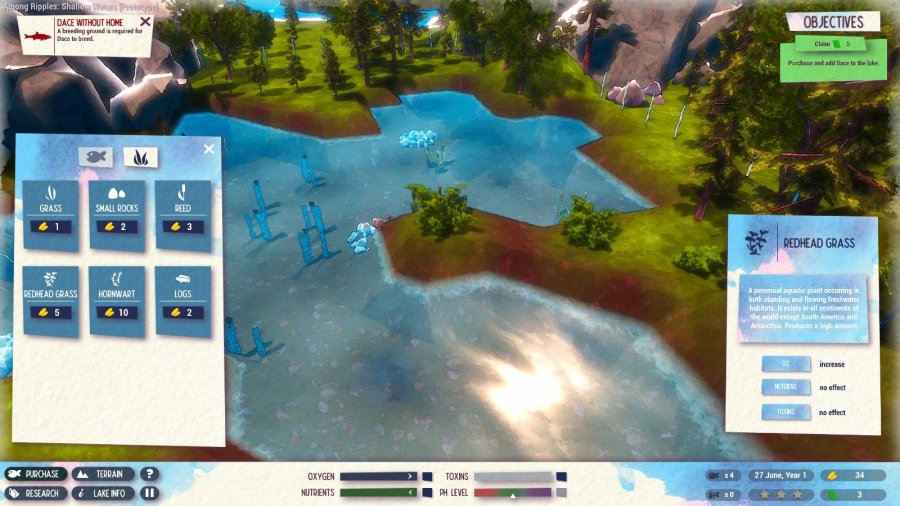 I own Crest, another game from the developers Eat Create Sleep. I felt that this was a good game, but it felt unfinished. So, seeing that they have another game in development made me really curious. And it’s an “eco tycoon simulation” about rivers! I always say that graphics aren’t important to me, but apparently they are! Not in the way that I need the newest high-end graphics for a game. I am perfectly happy with Equilinox, for example. Among Ripples: Shallow Waters looks painted, but the black borders annoy me. I also want to rub my eyes because it feels as if I’m not seeing clearly. But graphics aside, I did not mention Equilinox without a reason, because the game reminds me of it: You have a peaceful landscape in front of you that you need to adjust, so your fish can survive. They need certain amounts of specific plants or stones in order to breed. It seems to be a standard “do this in order to unlock this” building game. At the same time, you can learn about fish and their environment. Why plants are needed, for example (if you missed this in biology class) and what specific fish need to be well (I don’t think this was ever covered in our biology classes). In theory, this would be a game that I love and want to play more of. In reality, it didn’t click. Maybe it’s the graphics, maybe it’s because fish are boring compared to other animals. There are other animals later on, like ducks, though. There was nothing wrong with the game at all other than me not liking the graphic style too much. I will keep an eye out for this game, but it is not on my wishlist. 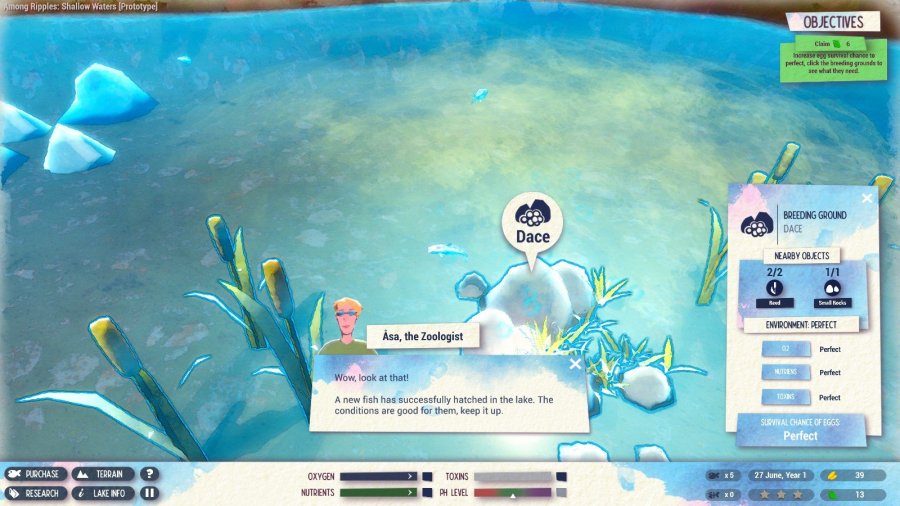 As you can see, we’re getting close to wishlisted games… I’ll write about the games that made it on my wishlist in a separate blog post.