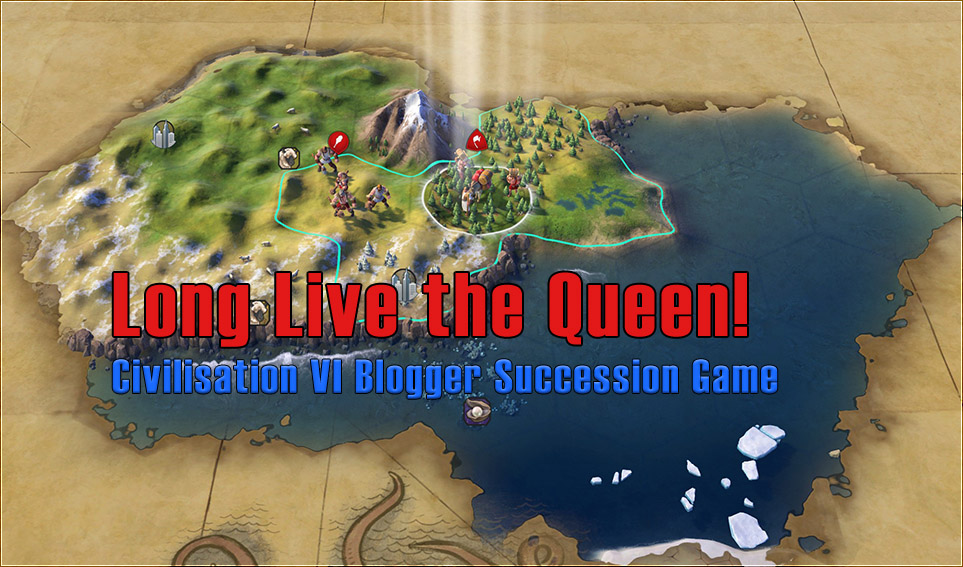 Naithin had the idea to start a Civ VI succession game and I jumped at the chance to participate!

The rules, short and sweet (you can read all of them here): We’re playing the Civ VI base game without expansions or DLCs, so all participants can play. We have a player order which determines who gets to play after whom. When it’s your turn, you play for 10 turns and then the next person takes over the game and continues.

You can follow the game progression in each of our blogs! Please see Naithin’s post about the game for the links to all previous blog posts as he seems to be keeping track there. And in case you want to play along and see how your version of our game develops, you can find the save games here.

War, peace, war, peace, where are we now? My head’s spinning. I think we’re actually at peace now with everybody. We also did manage to found the last available religion, buddhism – who knew  religion is a limited resource! We also expanded and have two more cities now. One is awfully far away – maybe the perfect spot for our citizens’ summer vacation? No need to learn another language or get used to a different currency. Genius! Poor Bradford is only useful for watching penguins, I’m afraid. Cleopatra has proudly announced to the world that we’re friends. Awww, isn’t she sweet? And I think we have a chance at achieving a science victory? At least, we’re ahead of others if I saw that right. If that doesn’t work out, there’s always domination! 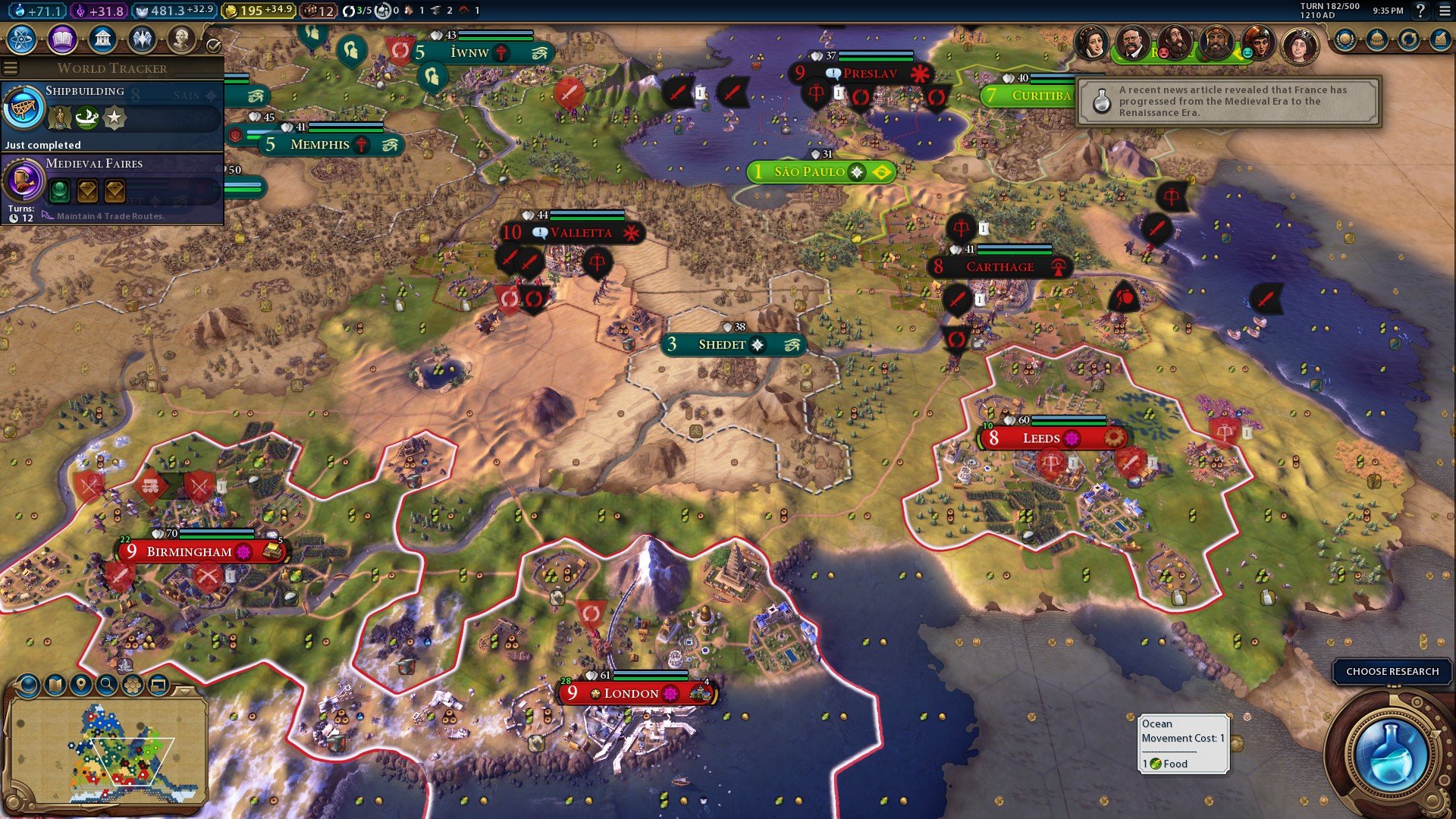 Stoke-Upon-Trent seems to be stuck between Gilgamesh’s army. He is also directly behind us in military strength. We’re ahead, but I think it’s still a good idea to increase our army even further. We also currently have  one niter resource – but I’m not sure which military unit makes more sense to use, so I’ll leave the decision for somebody who’s got more experience with fighting – or until we get a second niter resource and it doesn’t matter anymore anyway. 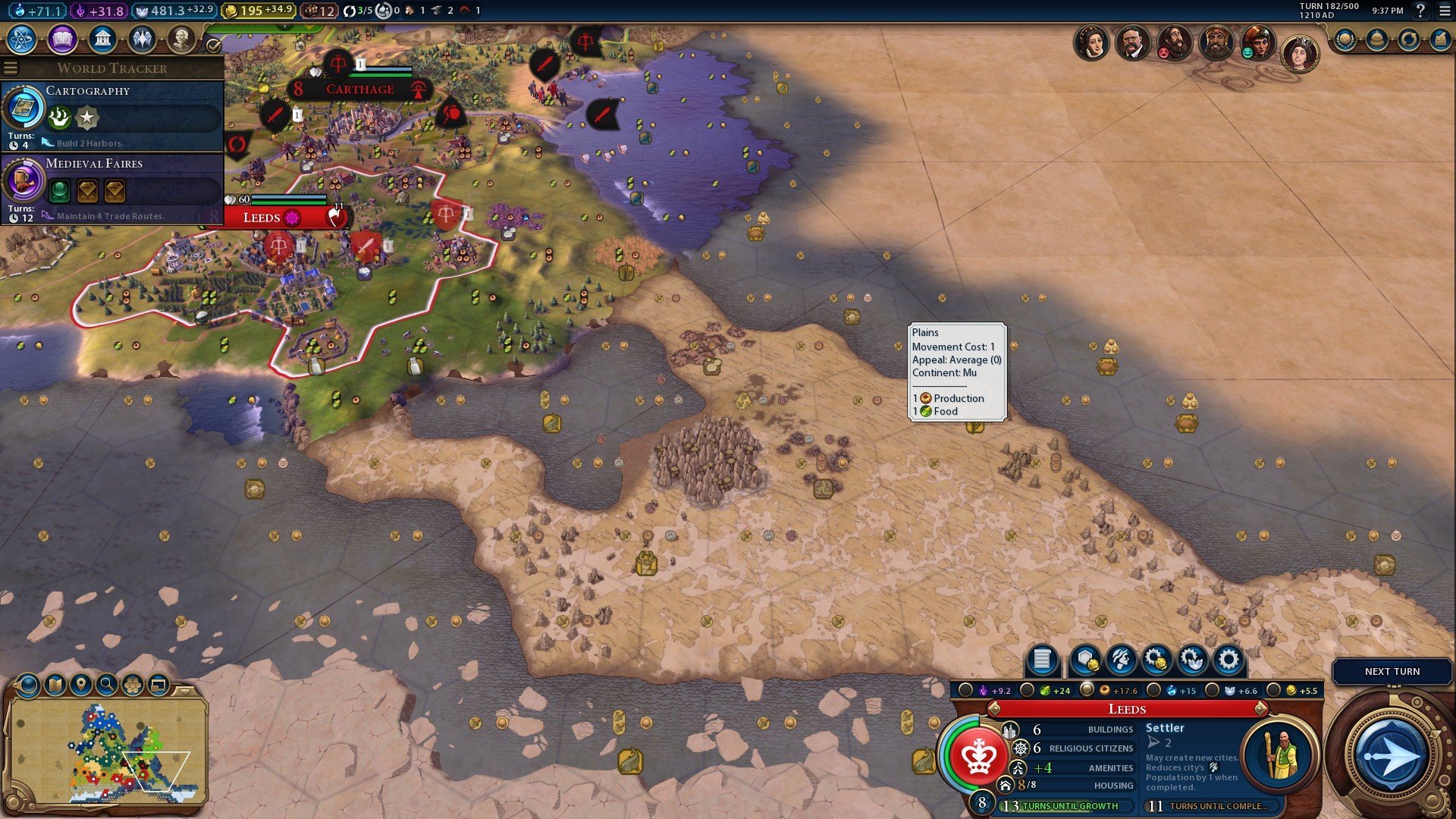 I always love expanding in games like this, so let’s go with another settler! There is an uncontested area to the south east of our empire. I think we’ve only seen a few barbarians there before. But there is this spot facing outside to the – hopefully – open sea. The city there would have access to a luxury resource, crabs, deer, wheat, mercury, pearls and fish. Sounds great! If it wasn’t for the barbarians, of course. But since the settler takes longer to build anyway, this will not be my decision to make. I’m just sharing my thought process here, so you all know that there actually is some thought behind my actions… sometimes. 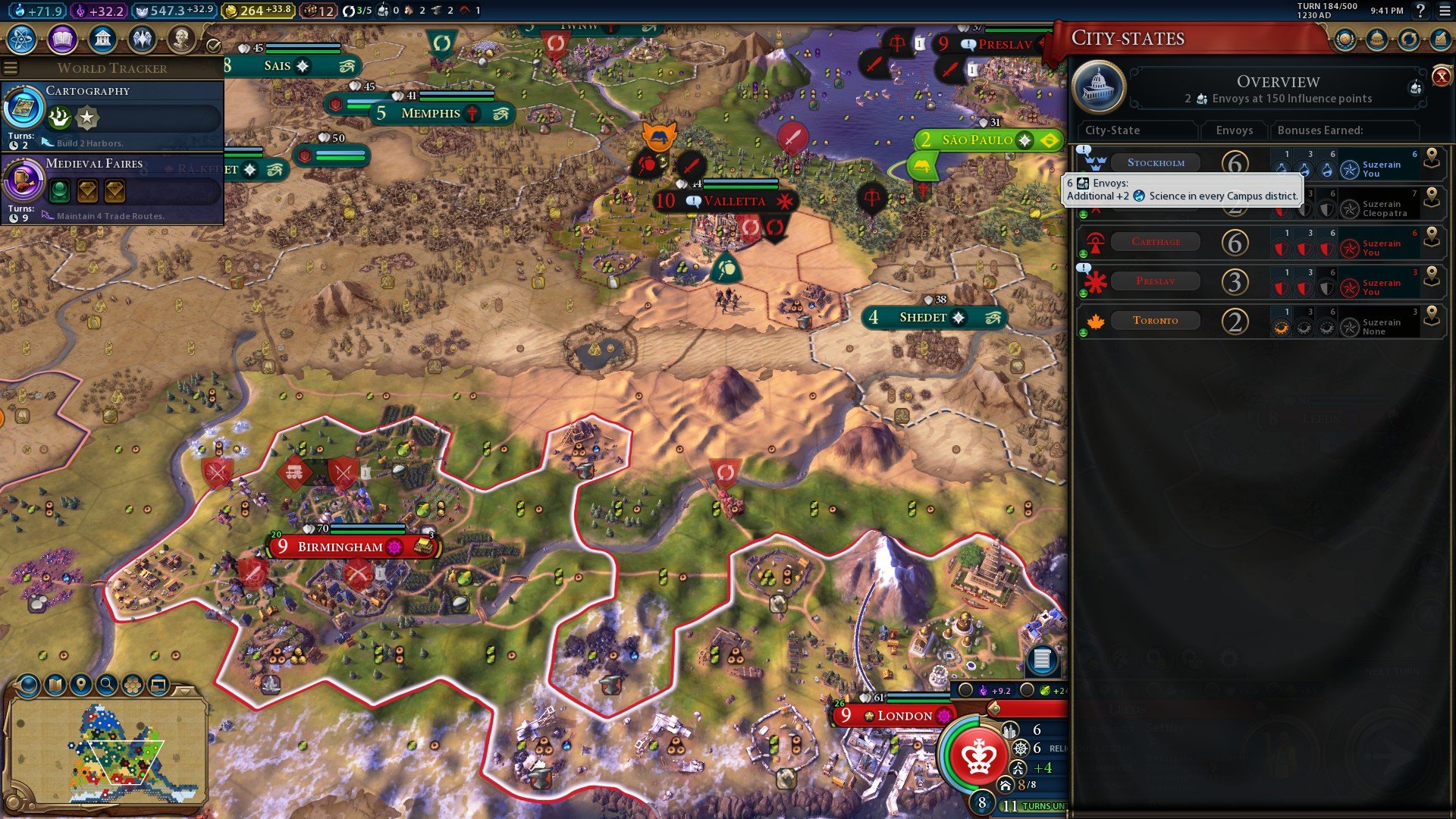 We earned some more envoys in these ten turns, so I put some of them towards the 6 point science bonus. There have been three turns where I did not get to do anything at all and another turn where I only got to send two envoys. So, it’s been rather uneventful. But research advanced – I chose siege tactics to research next as it could be smart to increase our defenses should Gilgamesh want to attack us. But maybe he thinks the same thing about us? Our army is also close to his borders, after all. Oh, and we did grab another luxury resource, so his city Adab can’t get it. But to make up for it, we went a delegation to Gilgamesh. I like showing off my military strength, but I do not want to go at war with him – or force the players following my ten turns to fight out a war that I started. 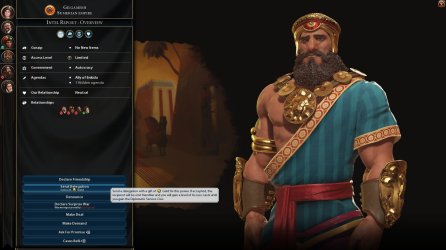 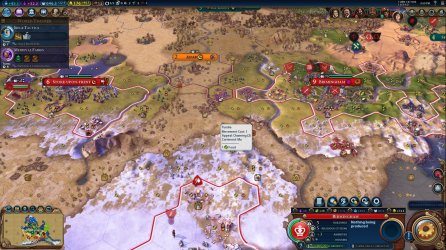 I spotted two barbarian units who were close to death. I sent a military unit after them which was too slow to catch up – and it did seem oddly familiar to me. History repeats itself… 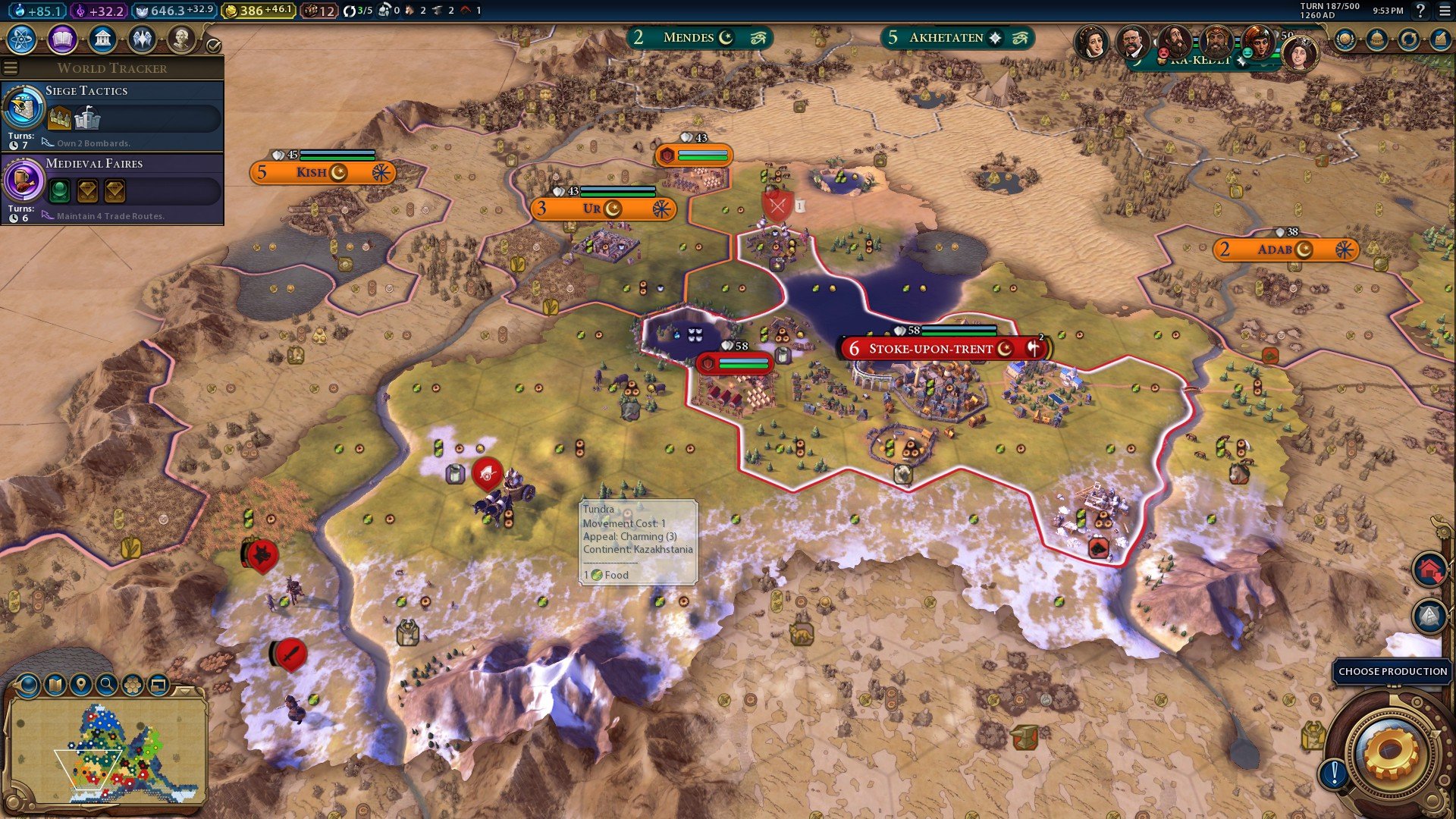 I also noticed that we have 3 free trade routes – we should probably get some more traders. But my turns are up and I can’t do anything else now. I’m curious to see what Tessa will do – and as always: Just because I had an idea of what to do next doesn’t mean at all that she will have to follow through with it. I’m just leaving my thoughts here. :) Here is the save game. 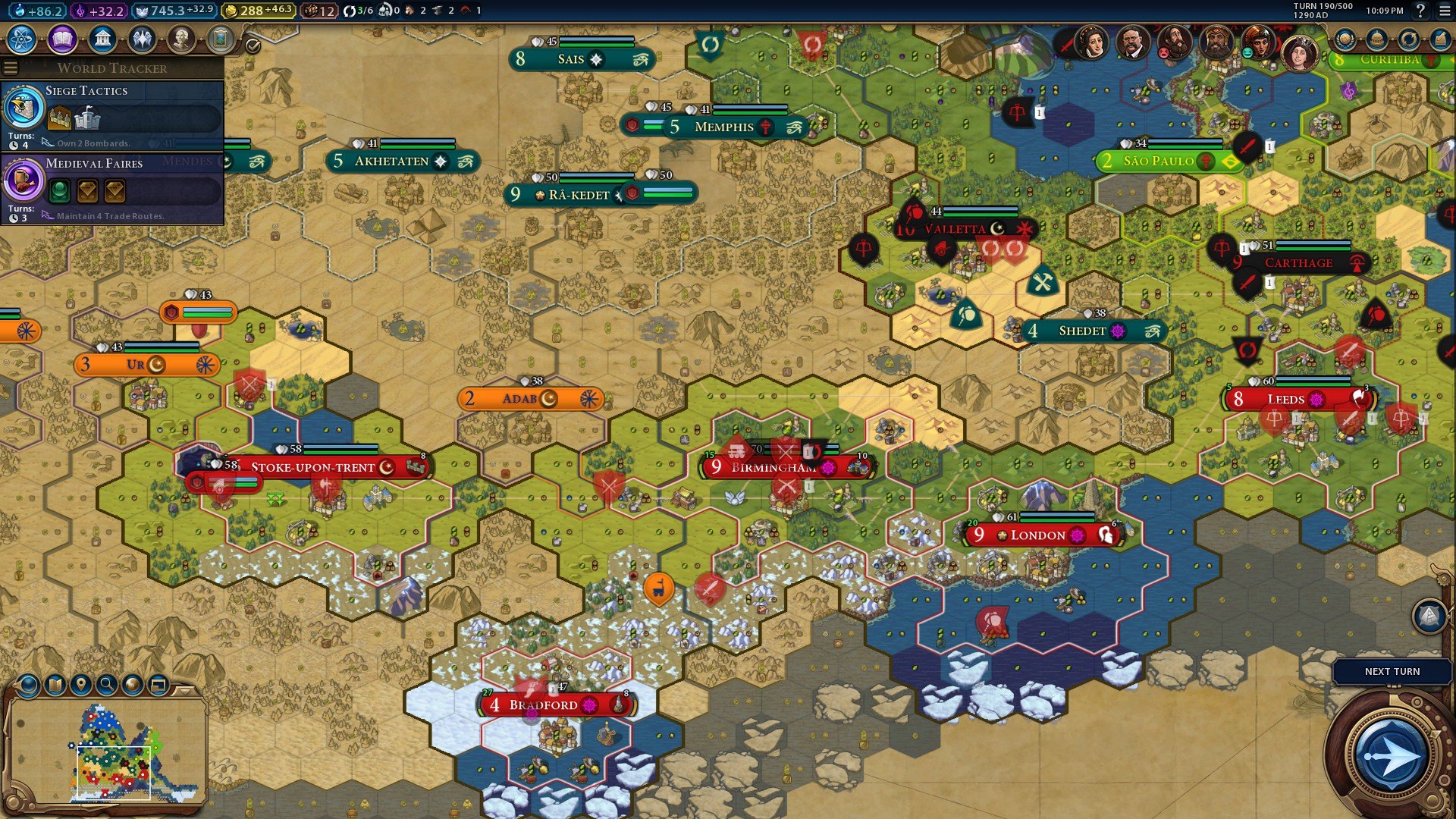