Naithin had the idea to start a Civ VI succession game and I jumped at the chance to participate!

The rules, short and sweet (you can read all of them here): We’re playing the Civ VI base game without expansions or DLCs, so all participants can play. We have a player order which determines who gets to play after whom. When it’s your turn, you play for 10 turns and then the next person takes over the game and continues.

The current participants are:

You can follow the game progression in each of our blogs!

I’m copying Rakuno’s format and will start by summarizing what happened so far. We’re playing as England. The starting tile wasn’t ideal, so the first city, London, was founded in turn 2. There was already a barbarian camp threatening our soldiers. But we’ve been safe so far and focused on growing our empire.

My usual strategy is to not bother with a scout or a slinger and start getting archers as fast as possible. With these, I eliminate the pesky barbarians and also show the rest of the world who they’re dealing with! But this time, I’m playing with others and it’s not my empire, it’s ours. Anyway, Rakuno managed to eliminate the barbarian camp with our two-men-army during his turns. I can proudly say that their discipline is high! And in order to keep growing, a builder will help us with setting up pastures. We have also met Cleopatra who rules on the continent of South America. Let’s see if we can keep up the peace…

From here on, it’s my time to reign! Cleopatra is closer than I’d like and the world map’s end is just a little south of us. I don’t like that. I don’t like her! We’re at 4/4 housing and I’m feeling this itch to build a settler. I want settlers early on in all the games I play, so I want one. That’s enough reason, right?

Also, the builder gets to construct a pasture for us. I can hear a battlecry in that moment – the warrior got his promotion and is now even stronger against melee attackers. Also, he’s back to almost full health. Barbarians, here we come!

Building the pasture boosted our knowledge of Horseback Riding. Of course, we don’t have any horses yet and I’m not sure the sheep would be too happy… let’s postpone that research for later, shall we? But this is where the game asks us for the next research. I’m torn between Writing and Archery, but Writing is already boosted and we can get a boost for Archery once we kill a unit with the slinger. So, Writing it is.

We also went a bit more exploring – mainly on the eastern side of Cleopatra’s city to see if we can find a nice spot for our second city while showing her where her empire will end – right before her pretty little nose, of course! That’s where we met Valletta, the first city-state. They kindly asked us to train a spearman, so they could be even more impressed with our little army (I have no time for that – maybe later). We finished researching the Foreign Aid civic not long afterwards. Now we could switch the civics… but I don’t think it’d make much sense, so I leave it at that. I chose Craftmanship now as it’s required anyway in order to get to Political Philosophy which will unlock more governments.

I turned the scout around once they stared into the eyes of some barbarians. Maybe they should put up warning signs… don’t follow the river north unless prepared! Meanwhile, the warriors heard some screeches and decided to hurry towards the scout who was being followed by the barbarians. The slinger on the east found some injured warrior who belongs to Carthage, another city-state (who wants us to build a galley). I must say, it’s getting crowded here! We’re the first that Carthage meets, so we get an envoy there which gives us +2 production in our capital when producing units.

Turn 28 – the advisor urges us to think about building a district. But now, let’s first welcome the settler which may make his (or her) way north-east as that’s where we found horses and I really want to save the sheep now! Conveniently, we have an idle builder and there’s the slinger unit guarding the horses… the only thing we’re missing – is the knowledge for horseback riding.

The city now wants something new built. I honestly have no idea what’s best now, so I chose the granary as that will allow us to keep growing the city by providing +2 housing and one additional food.

And that’s where it happened: I tried to move two civilian units onto the same tile. Since this isn’t possible, the poor settlers are trying to move around the mountain now. Thankfully, they heard me call them back in time! So they just made a little detour – one tile north, then back south again. Oops. I was planning to send them to the spot suggested by the advisor as there are the horses, as well as rice and sugar. Finally, as one of the last things I can do before handing the game over to Tessa, the warrior from Carthage finally moved away from the tribal village! The slinger who had been waiting next to that tile for three turns threw himself onto it before anybody else occupied it again and we got the State Workforce boosted as well as Mysticism.

I called the units from the north back closer to our empire as there’s nothing of interest up there. Let Cleopatra deal with the barbarians for now. We have a greener pasture to settle in… for now. 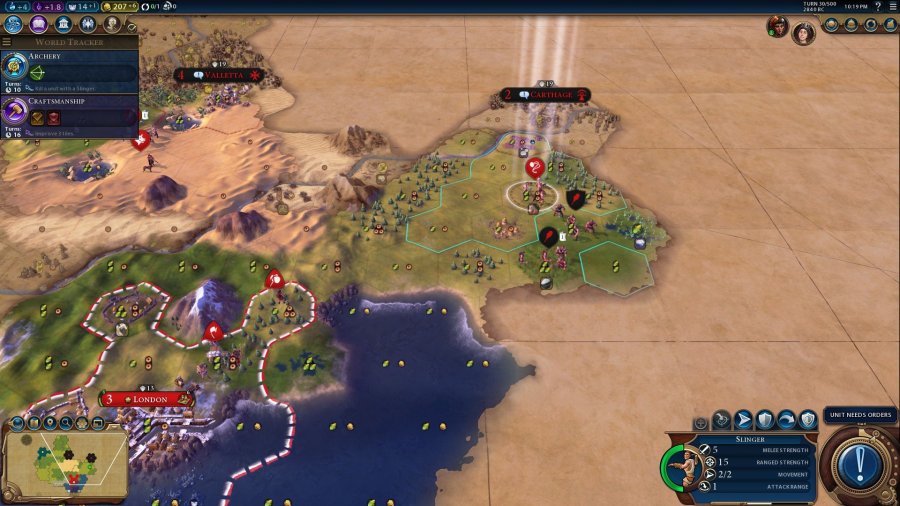 And this was my turn 30. Now I’m handing it over to Tessa who will continue with the next 10 turns.

By the way, I don’t think I ever spent an hour for 10 turns in a Civ game before…