Good old Black & White… I loved the game and I hated it. To be honest, I never got far. There was this one quest where you had to follow a non-believer without him noticing you. I tried over and over again, on several days, and I never managed to get past him. But it was still a special game! A few days ago, I opened my inbox to find the subject line: “The God Game Genre is Back!” – It was from 42 Bits Entertainment telling me about their Kickstarter game and offering me to give the early alpha a try. It took me all about five minutes to skim over the Kickstarter project to realize that yes, this may actually be a kind of God Game I would love to play.

I’m jumping ahead a bit here when I say that it has also, after Project Gorgon and Chinatown Detective Agency, become the third PC game I backed on Kickstarter! The main reason wasn’t being able to play the early alpha build, though. It was rather the game’s description and the fact that they got funding from the Film- und Medienstiftung NRW (some kind of local German funding). Having such an official kind of funding makes me trust the project more, to be honest. But even though I had decided I wanted to back it, I still waited until after I tried out that build. I may easily get excited, but there’s at least some tiny little bit of rationality left. Their roadmap also seems to be rather rational and it shows just how early in the development process we are. Alpha will likely start in June this year. Beta won’t be before December. Steam Early Access is scheduled for April 2021. And release will probably happen in Q3 2021. Something that I find a bit weird is that the more money you back them with, the more votes you will get in their feature queries. I am not sure that’s a good idea. At least not when you want to have the game appealing to a lot of players as opposed to fewer people with more money to spend on games.

But let me now finally tell you about my impressions! First, a very important note: I got an early alpha build to look at! I am not going to write about bugs, weird behaviour that doesn’t seem intentional, missing features and so on. I am, however, going to tell you what’s already there, and my impressions of the game so far.

It’s a single-player game and you play as a God against up to four other Gods. There’ll be a campaign as well as individual skirmishes. The enemy Gods can focus on violence, deceit, pleasure or fertility. And of course, you want to be the mightiest God with the most followers. So you need to make the people in the different villages believe in you and your might, but you can decide how you want to achieve that. You can be nice to them, spread love, keep them happy with fireworks or you instill fear in them and make them follow you because they’re scared you may kill them off if they don’t! Choose your strategy wisely. The game features two different phases: During the day, you spread love and/or fear – basically, this is when you act. During the night, you plan. You choose if villagers should erect certain buildings, or you manipulate their dreams. As an example, you can tell a village to send off food to another village that way. All actions cost mana and it is more expensive the further away it is from your “base”, a huge orb. I was told that this orb is the representation of my godly self in the world!

The early alpha lets me play a match at the early stage (so basically the regular beginning of a match) and a later stage. The later stage still had me start with just a handful of followers, but the maximum amount was at 2000. At the beginning of a match, it’s 5. I started with a regular new game and got a mini tutorial which explained to me how to do wonders (spreading love or instilling fear), create fireworks and so on. I shouldn’t forget the imp: It let me give it a name, after all, and led me through the tutorial! After the tutorial, it’s basically a swirling light where my mouse cursor is and follows my mouse’s movements on the screen. I am not sure it serves any other purpose, but it was a nice touch in the tutorial.

There is also a little bit of music in the game already. It seems to have a good quality, but at the moment, you hear one song over and over again which is a bit repetitive and you can only change the volume of the sounds, but not turn off the music specifically at the moment. If the rest of the soundtrack is going to be like that, though, then it’ll be very nice to listen to while playing the game. 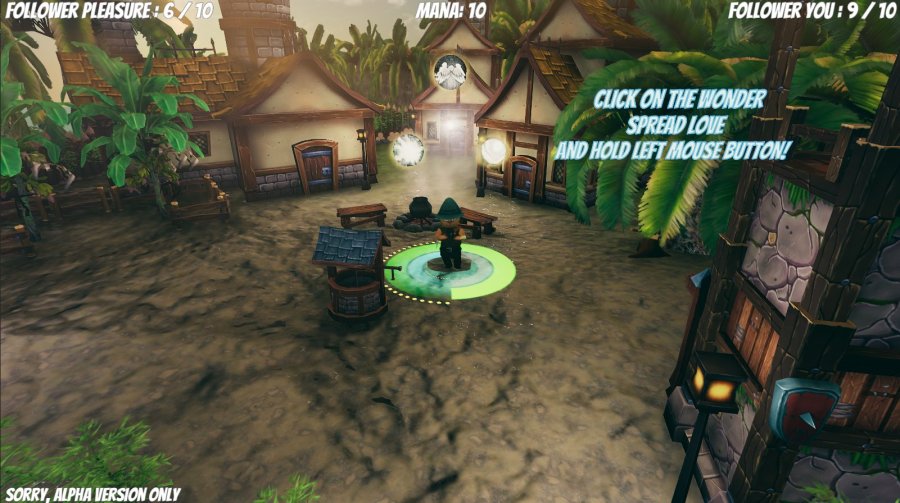 I am not sure if the villagers’ faces will stay like that. It’s creepy, to be honest. It looks like dead dolls and I don’t much care for the villagers that way. They all have individual names, at least, which makes it easier to identify them. Maybe at some point you even have your favourites that you spoil here and there with a bit of extra love and healing.

The developers decided to keep the user interface to a minimum and I like that. I think it’ll work very well with this kind of game, although I did wish to see more information. You can see how many followers you have at the top of the screen. For each village, you can get more information as well when hovering over them. I’d just like to have one screen of information, at least. A list of all villages and the percentages of followers I have in each of them and so on. Other than that, having the minimal UI is fine. It makes you focus on the screen and the villages themselves. Villages that mainly follow me have a certain kind of roof colour, by the way. Blue in this case – not sure it’ll always be blue for the player or if we will be able to choose the colour we want.

I also started a late game with a maximum of 2000 followers, but I quickly fell behind the AI. They had something like 190 followers while I dropped from 58 to 56. I was spreading wonders and inspired villagers to make them more productive, but there was no strategy behind my actions. I quit the game at that point. Quite obviously, I didn’t really know what I was doing. But I also figured that I don’t have to: There’ll be plenty of time to learn the game once it has all the features in – in about a year. At least, I already have one game to look forward to in 2021! 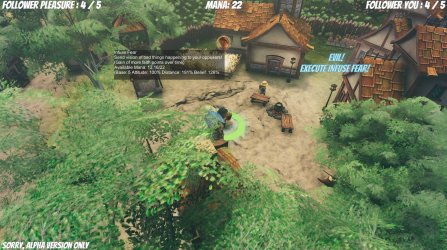 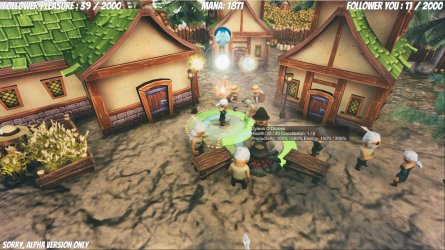 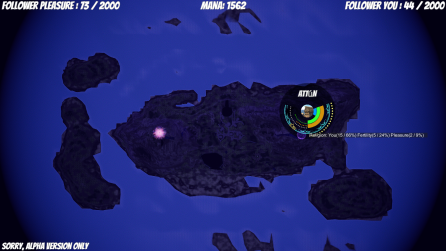 And since I only write about my experiences and I’m sure that there’ll be people here that would want to see a video of the game instead now, I’ll leave you with two recommendactions, an English and a German video. You can also hear the music there! It’s really atmospheric and calm.

Please note: I did receive the early alpha version for free. I was not asked to write about the game! In other words: All opinions are my own. But as you may know, if I’ve got nothing nice to say, I usually prefer not to say anything at all. So if I didn’t like the game, you probably wouldn’t see a blog post about it.