I quite enjoy detective games. It’s a genre where I actually have a high percentage of finished games! I particularly liked LA Noire (not the ending, though) and Sherlock Holmes: Crimes and Punishments. So when I saw this Kickstarter game advertised, I at least had to take a look. Of course, since it’s a Kickstarter game, there’s a risk attached. It may never get finished. However, they have the alpha version that you can download and try on itchio. It’s the 5th project I decided to back and only the second PC game after Project Gorgon.

Their inspiration for the game was “Where in the world is Carmen Sandiego?” Chinatown Detective Agency takes place in 2032. You play as Amira Darma, a private investigator, in Singapore. I don’t know much about the game’s story other than the basic setting as I like to go into such games without knowing that much in advance.

“The world is in a state of flux as the global economy nears the nadir of its decade-long collapse. Singapore stands as a last refuge of order but even here the government struggles on the brink of chaos. Private detectives are now the first call for those citizens able to afford a semblance of justice.

That’s where you come in. You are Amira Darma, once a rising star at INTERPOL, now a freshly minted Private Investigator in the heart of Chinatown, and your first client is about to walk through your door…”

The voice acting seems pretty solid and I like the setting so far. 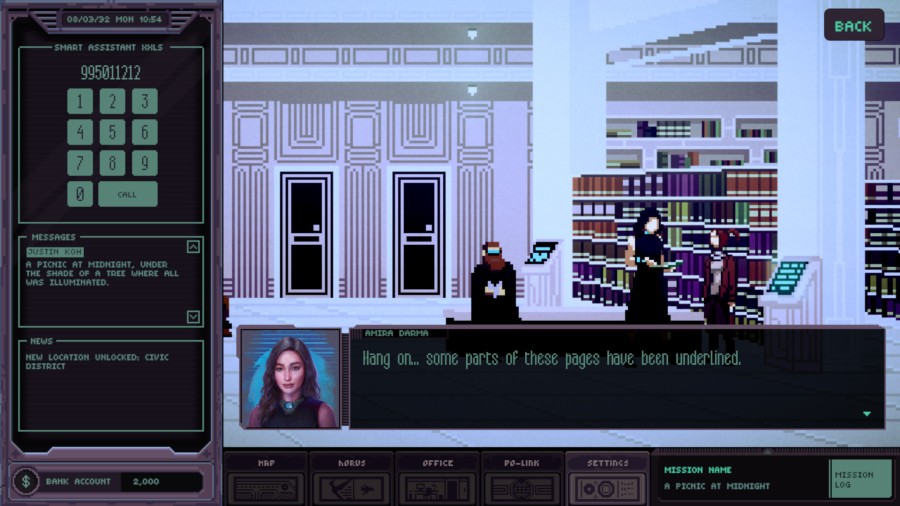 Other than looking at the alpha, I let their first game, Terroir, decide whether I trust them enough to buy the game. Terroir is something completely different: It’s a tile-based simulation game where you have a wine estate. The game has a demo as well, so this is what I checked out. The reviews on Steam are mostly positive with 72 % positive reviews. The negative ones that I saw were mostly about the game not getting more content anymore and I think that’s fine. Some games are just finished at some point. And people complaining about wanting more content are usually people that like the game enough to… want more content. So that’s not a bad thing at all!

So I guess that’s another title to look forward to this year. There haven’t been that many for me so far (I wrote about MMOs previously). And since it could be a good detective game, I’m even more pleased – and impatiently waiting! But first, it needs to succeed in the Kickstarter campaign, of course.