Ah, me and this kind of game… of course I had to get it! It’s also a topic very dear to my heart and I’ve been known to have inward commuter rage a lot since we moved here – and a work commute that should take 55 minutes each way taking 75 minutes on average instead (no, not all German trains are on time…). But now, on to my first impressions of Overcrowd: A Commute ‘Em Up (Steam link – Official website).

This game is in Early Access on Steam. Do not buy this game if it’s not enough content or not good enough for you right now! Basically, Early Access is “what you see is what you get”. Even with the best intentions, it’s not guaranteed that the developers will bring the game to an official release. Also, there are bugs and issues as the game is still in active development.

The tutorial is already good enough to get you started, but there’s still lots left to discover afterwards. Then again, since almost everything is still subject to change, a full and complete tutorial would be a waste of time at the moment. But as I said, it’s good! I’ve only been playing through the campaign so far, which is basically different maps that add more and different challenges (like having a brute or a thief enter your station). If you unlock something, e. g. the ability to have three platforms on a map, you take this progress with you to the next map in the campaign. But you can also return to earlier maps once you’ve unlocked more things and continue working on the earlier maps by adding stuff like more platforms etc. 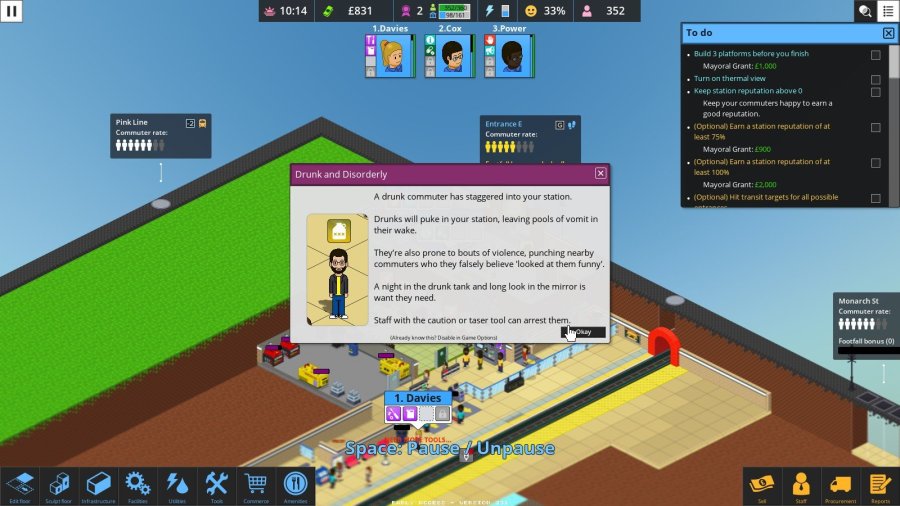 You start with nothing but tracks on the map and then need to decide where you want to build your first platform and your entrance. You can build on different floors, but not on top of each other. That is, if you choose to build on the ground floor, you can’t build anything directly below or above. I think this is because of the game’s engine? But it adds a strategic element that requires you to plan ahead accordingly or save a lot of money before you can rebuild your station later on.

There are objectives to fulfill on the different campaign maps, but there is also always one lose condition: You lose the game when the station’s reputation hits 0 %. Things like vomit on the floor, people hitting other commuters, dead people on the floor – all of this mishaps cause you to lose reputation. You get one save slot for your map. That is, you can’t save several progress states of a map and return to an earlier save if something went wrong. The mean thing is that a small little inconvenience like a brute hitting commuters can bring your reputation down fast. I love the recent change they made here that the auto-save function will be disabled when your reputation hits 10 % or below. So, you can try to save your station and return to the last save point if it didn’t work out and try again. Or you just restart the entire map if you like.

Overall, there is lots of micromanagement and clicking. There is staff you can hire and you decide which priorities each one has for each of the tasks they need to look after. They also have a certain radius of activity and if something happens outside of it, they won’t go there. Of course, they want some work breaks, too, and a nice staff room. Thankfully, the staff do their very best and you can generally trust them to keep the station in check – as long as they get enough breaks, get their salaries on time (or else they go on a strike) and have enough tools required to do their job. You can choose to have your staff autorest or you schedule their rests. I had them on autorest first, but am currently trying out scheduled rests to make sure they all get to rest – but not at the same time! So far, it’s been the much better option for my stations. There are also lots of tools that you need for your station. And you better have more than one of each for the rools that are required often, like the mop. The first aid kit to heal somebody from the gastric flu might be a bit far-fetched, though… and seriously, I’d love for that to be a real thing! However, if you let a disease spread in the station, again, your reputation will drop very fast! The first aid kit is also needed to help people that were beaten by a brute. So I’d always advice you to have at least two of them.

In the beginning, you actually need to call each train to your platform. Once it arrives, passengers leave the train and new ones enter and the train will then leave automatically. But if you forget to call the next train when it’s ready, no train will arrive. This, of course, will make the commuters very angry as they’re going to be late. It’s happened to me countless times when I was too focused on creating a new room or adding more furniture for the commuters or a shop for them to go buy nice things. But thankfully, there is tech to unlock which lets you auto-schedule trains.

You can either play the campaign or a sandbox game. I already mentioned the campaign above. The sandbox lets you choose several different settings. You can choose to have an infinite amount of money, you can increased your starting money and starting bonds, choose to have all tech unlocked at the start and so on. There are also victory conditions that you can optionally enable. And this is just the tip of the iceberg, apparently. I never played a sandbox game and just chose to click on it, so I can tell you what you can choose. There is… a lot, really. Another example: How do commuters react to things like illnesses, rats, heat?

Speaking of heat: This is another thing you need to take care of. Having trains run through your station all day causes a lot of heat, of course. So you will have to add air conditioning and fans. Some items can only be placed on concrete walls. Unfortunately, there aren’t that many concrete walls in your station. You will have to plan around that as well to keep your commuters happy! 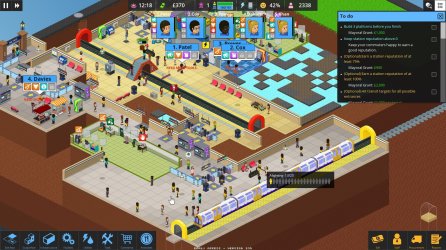 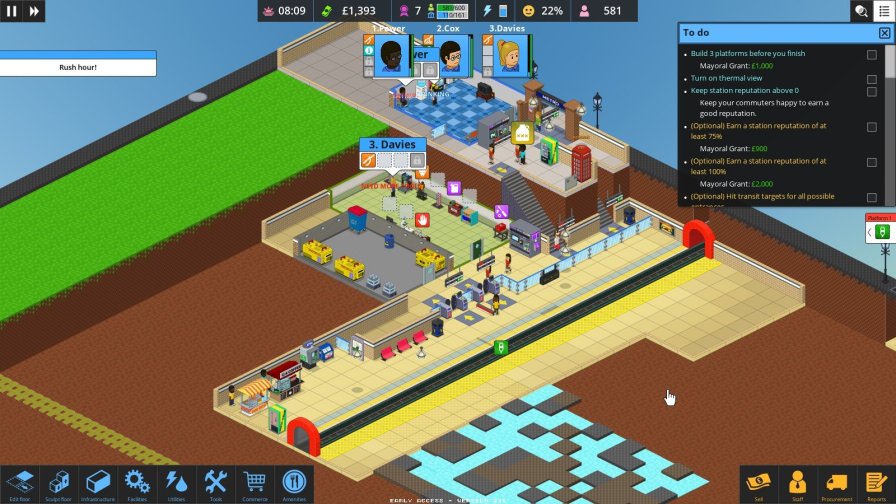 I just saw that you can also choose when your staff empties bins, refuels generators and so on. There’s a different threshold for the day and the night, which is a difference! Between 23.00h and 7.00h, there are no trains, so your staff can get some rest – and refuel generators as well as empty the bins. They are there 24/7, after all!

Other than sandbox and campaign, there is also the “Commute of the day”. They tell you to first play the tutorial and the campaign, because the Commute of the Day is supposedly “hard” and I believe them. It mentions building a five track station and the most I’ve had so far was two!

My personal verdict: I think it’s a great “little” game that keeps you busy and occupied. There is always something to do and if there isn’t for a moment, you can watch and check your platforms to see if there’s anything that needs improvement. I wish you could scroll out further as it makes it difficult to see the tracks sometimes. I also can’t say anything about the soundtrack, because I turned it off. The sounds themselves are good, though. It’s easy to hear when something important is happening. The game’s been running pretty well and I haven’t had any crashes or game-breaking bugs. I don’t know if they’re going to add any more features or content, but it looks complete to me. If I didn’t know it was in Early Access, I’d believe it’s a regular released game. Also, the game has the Wuselfaktor which makes this German here very happy!

The usual disclaimer: This is an Early Impressions Review and does not claim to be a fully grown objective game review. It does, however, reflect my personal and subjective experiences with the game. I bought this game with my own money and did not receive anything from the developers.