Now that WoW Classic has been out for a couple of months, the vanilla nostalgia has left and the harsh reality is back. WoW Classic, for me, is much better and much more enjoyable than the current WoW version. If it wasn’t for Classic, I’d not have an active sub at all. However, there are things that annoy me and that I miss and judging from conversations I’ve seen, I am not the only one.

For me, the best version of “Classic” would either be Burning Crusade or Wrath of the Lich King (not going into detail about which patch version exactly here…).

What I miss in the current classic version: Draenei and Blood elves! If memory serves me right, the addition of these races – mostly the Blood Elves – led to a slightly better ratio of Horde vs. Alliance. Maybe it also went from too many Alliance players to too many Horde players. But most of all, I miss my Draenei mage as she was the character I called my main when I played WoW actively with others. She was the one to see raids from the inside, even if it was just very casually. I also miss being able to play a paladin on Horde side and shaman on Alliance side.

The class that I miss most is the Death Knight. I really liked the way they played as melee back when they were released. I also liked playing through their starter area. And of course, dual spec arrived with Wrath of the Lich King! I don’t miss the region or the story much. Wrath of the Lich King was about the time where I stopped being interested in WoW. But dual spec and the Death Knight were great and useful additions that came with Wrath of the Lich King. Also, if we had either of them, there’d be more landmass for the players. As it stands, I can’t comfortably do quests in WoW Classic since every region seems to have a high population. Of course it’s nice to see that many other players around! But if you can’t do a quest because the mobs are constantly all dead and you spend more time waiting for respawn than doing anything else, it definitely feels like a waste of time and kills any enjoyment. I try to get gaming time in on Sunday mornings before the mass of players have woken up, but that’s not exactly a good way of playing a game that requires a monthly fee. I would like to get that enjoyment whenever I feel like it and when I find the time to play (usually in the evenings during European prime time)! Or alternatively, they could gives us back two layers per server if it gets too full. 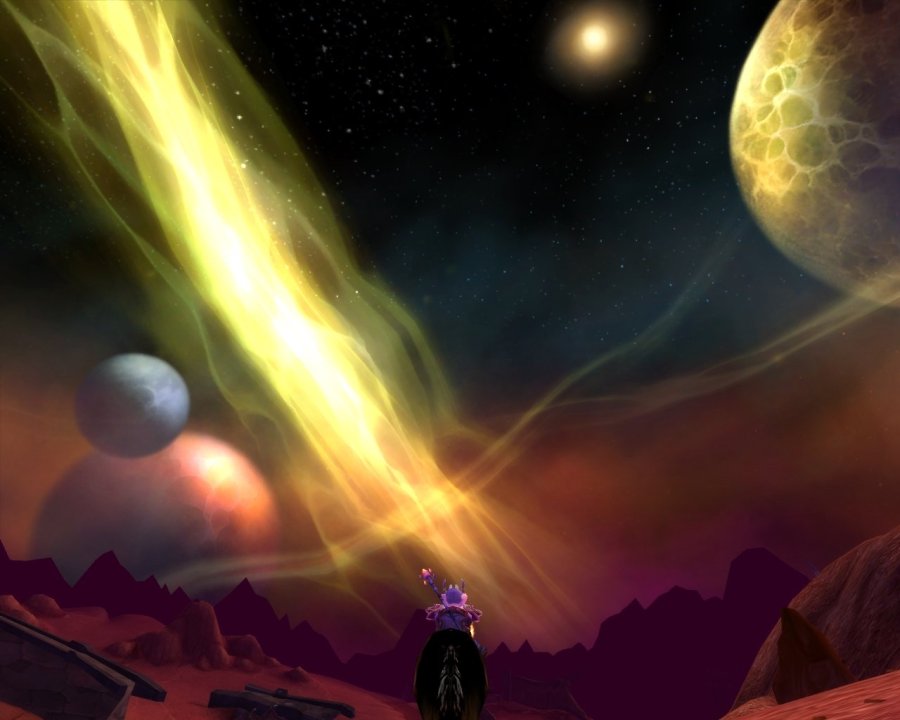 As for PvP, I hated the addition of arenas in Burning Crusade and I didn’t particularly care for any of the new battlegrounds. I played arenas in the 2v2 and 3v3 versions and I hated every single minute of it. I like having objectives in battlegrounds and I like being able to jump back into the fight after being killed! I still played arenas because it was a way to get PvP items. So, if we went to the newer versions, this would be an aspect that I’d still hate. Nowadays, I would definitely avoid arenas and not put a single toe or hoof in there!

What I also really miss in the current classic version is the ability to make a focus macro. Basically, you put an NPC you need to control as your focus and can just click the macro to have it re-sheeped or re-seduced etc.

For me, all of these – real “vanilla”, Burning Crusade and Wrath of the Lich King are “Classic”. This era ends for me when Cataclysm comes in. I loved that they dared to change the world as much as they did. But altogether, it stopped being World of Warcraft for me.

Anyway, at the moment, we only have vanilla and it’s “take it or leave it”. So far, I’m taking it. But I am honestly not sure for how long it’ll keep me entertained. Maybe once Arathi Basin is in, I’ll have more fun again.