First of all, please excuse me if I’m not using the correct English terms for the features of the game. I switched to the German client which I usually don’t do with games that are natively in English. But there’s so much information about the animals that you can read about that I want to do that in my native tongue. It’s an educational game played for relaxation and my brain wants to process them in German!

Planet Zoo released on November 5. The developers are the same ones that made Planet Coaster and Jurassic World Evolution. I already loved JWE for its impressive graphics and how realistic the dinosaurs look and behave (well, as far as we can all guess, of course!). So far, I have only played the career mode in Planet Zoo which doesn’t have all features unlocked in the beginning. That’s a good thing, though, as with every mission, you’re slowly introduced to everything there is to know about the game.

Let’s be honest here: I did encounter bugs and issues during these first career mode missions. They’re basically functioning as a tutorial and there are bugs present that may prevent you from finishing the missions. If you ask me, this is not acceptable! One example: I was asked to increase the comfort level of all animals in their exhibits to a certain percentage. However, one of the monkey habitats suffered from being dirty. I sent the staff in to check it but they kept leaving without doing anything. Or they did clean a part of it, but it only temporarily increased the level. Over time, it kept getting worse and worse. An internet search revealed an issue with that habitat (I didn’t do anything in that habitat, by the way. It is built that way for the mission!): There are two wooden platforms present for the monkeys to climb on. One is too low, meaning: Staff can’t walk beneath the platform. I had to raise it which still made it climbable for the monkeys, but now my staff could walk under it and clean the poop from the ground. All’s well that ends well, right? Oh no! The comfort level increased, but the habitat was still too dirty. There is another issue present: The cemented floor of the hut for the monkeys. Apparently, when they poop in that hut, it falls below that cemented floor and since my keepers aren’t meerkats digging tunnels below the cement, they can’t reach that area either. I erased the hut and found… well, let’s say it wasn’t pleasant to see. My staff immediately hurried to clean it all up. I only found out about these issues thanks to a thread of other users discussing various possible reasons for habitats that aren’t getting cleaned. Just in case anybody else has this issue! 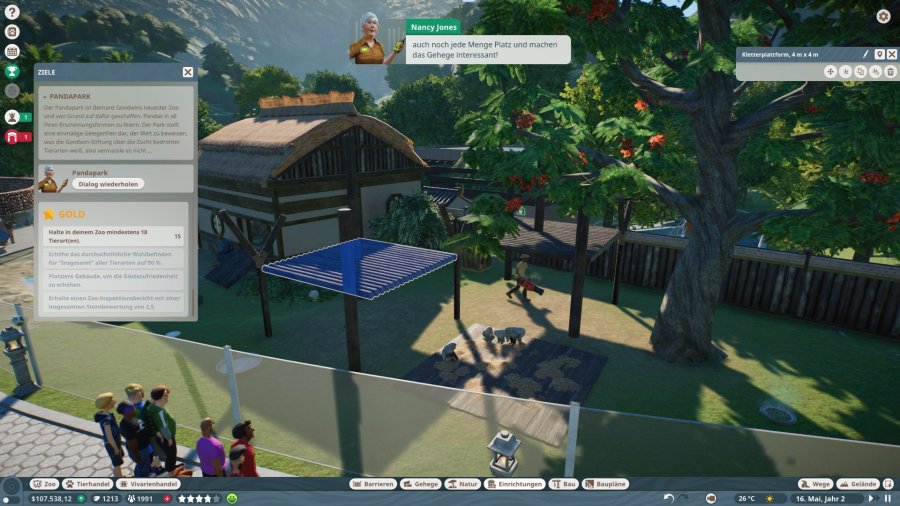 Another issue I had was with my tapirs. I had done everything the mission had told me to do and yet, they didn’t get fed. The game warned me they were starving. I’ve seen so many threads on feeding issues now! But putting bugs aside: Why is there even a long list of what you need to do in order for pets to not starve? There has to be a keeper’s hut nearby and a staff room. You have to assign a workspace and assign keepers to this workspace (not necessary, apparently, but it was listed as a suggestion if your pets aren’t getting fed). I would assume, game mechanics aside, that a good animal keeper would feed a starving pet even if it meant running to the other side of the zoo to reach a kitchen where food can be prepared. When looking at game mechanics, I get the keeper’s hut for preparing food and I get that they need a staff room and so on. It just seems that in Planet Zoo, this has to be built in a near perfect way in order for it to work and that is annoying. 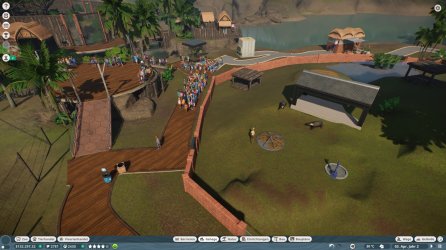 But back to the bug: I have no idea what was wrong. I removed a toy feeder. Those always get filled first and sometimes, the regular feeders aren’t filled because the toy ones are present. This isn’t actually an issue as the animals can still eat. I did everything you can find that you need to do. I removed the feeder, placed it somewhere else. Still nothing. And the warnings kept coming in that my animals were starving. An important note here: If your animals aren’t hungry, staff won’t put food in the feeder. I didn’t know that and was worried in another mission that the bug was present again. But thankfully, it wasn’t. It’s only been with these tapirs. What finally worked was deleting the feeder and then placing a feeder in there again (almost the same position!). I have no idea why that triggered it, but my animals survived.

I’ve seen people report game crashes which thankfully, I did not encounter at all. I do have an issue that the first time I start the game, the game screen kind of freezes without loading my avatar. I can’t click on anything. Right-clicking the game in my task bar to close it doesn’t work either. I need to open the task manager and kill the game process in there. When I then start the game, it loads properly.

Issues and annoyances aside, on to the rest of the game: It looks gorgeous! The animals’ movements and behavior are very realistic. I love watching the shy nyalas run through their exhibit and I admit, I giggled a bit when it rained heavily and the peafowls ran into their hut as quickly as they could. The panda bears are utterly adorable and I wish I could pet them! I’m just very sad to see that there are no koala bears or meerkats. Especially meerkats! Although I’d also squeal about Maras. But I expect they kept some favorites to release in DLCs.

The building process is rather clunky. I don’t find it easy to build paths and putting together whole buildings is out of the question for me thanks to my hand pain. But it has Steam Workshop integration which means I can just import what other players built and I already saw some amazing habitats!

And there are lots of things, information, etc. that you need to keep track of. For example, how many animals can be in a habitat and if they reproduce, when do you have to remove the young one? Make sure there’s no in-breeding as apparently, there are negative consequences to that.

You do not have access to every item when you start with your zoo. But you can research them via scientists and veterinarians. I am currently in a mission that just said: Build a zoo with xx different animals. No more hand-holding as they expect me to know everything by now. In general, this works quite well. What I didn’t know was that I need to research toys and toy feeders for each kind of animal first before it’s unlocked. In the previous missions, I always had access to everything I needed. Research is quite interesting, though, as you also unlock fun facts about the animal. So in general, the game isn’t only entertaining, it’s also educational! There is the Zoopedia where you find the unlocked fun facts, but also lots of useful information about the animals. You need the Zoopedia to build suitable habitats, but I also think it’s good to see how many of these animals are endangered. I mean, I know about most of them already, but I still think it’s good to stay aware of what we’re doing to nature. And in Planet Zoo, you’re trying to help by breeding animals. Of course, it doesn’t change anything about reality, but awareness is always the first step.

I’ve been having a lot of fun so far in the game and do not regret the purchase despite the issues the game is facing. Of course, I didn’t pay for the game out of my own (emptyish) pocket. My husband decided to gift me the game, so there’s no bad conscience from my side. Also, as I said, even with the bugs present, it’s a really good game. I like watching the animals and slowly seeing my zoo grow feels like quite an accomplishment. I also did not go broke so far which is something that usually happens with me in games like these. I’m often too eager and build too much in the beginning. The game gives you lots of information on what you’re earning and spending, how many guests came in, what your guests’ thoughts were, etc. And you can even click on a guest and use a first person camera view to experience the zoo with their eyes.

All of these factors make it a really good game for me. I just hope they can fix the bugs soon and make feeding more reasonable. But well, they have experience with their previous games and they are both getting fixes and support (and DLCs), so I’m not too worried. I’m just very very frustrated (mostly with the feeding troubles).

My current verdict: If you’re a fan of such games like I am and if you’re looking at videos and think: “I really really want this… now!”, then go ahead and buy it! But be prepared to search for hints and tips and to encounter bugs and maybe even crashes. However, I fully expect the same with Planet Zoo. If you’re easily frustrated and/or on the fence of getting the game, then wait for bug fixes first and maybe even for the game to go on sale.