There’s the Real Neat Blog Award going around at the moment and I’ve been tagged by Rakuno – a couple of days ago, actually.

So, here are my answers to his questions.

My 7 questions chosen for people whose answers I am curious about!

1. What is your favorite game? (It can be a video-game, tabletop game, card game, etc.)

And we’re starting with a really tough question. As you know, I love PC games, but I also really love board games! So, I’m going to choose one for each category. When it comes to board games, Talisman is one of my all-time favourites. Especially when played on a huge table with all the expansions. But it’s not my favourite anymore. This spot has been claimed by Mysterium. The game’s art is amazing and even though one could think it gets repetitive fast, it doesn’t. I even used tiny copies of some of the game’s cards for our wedding diorama. For PC games, I’ve got the feeling that as soon as I write down one game and hit “publish”, I’ll remember a game that didn’t come to my mind before but that’s totally better, you know? I’m going to say Tropico 4, because it’s one of the games that I’ve spent the most time playing while also featuring a great soundtrack and even though there’s Tropico 5 and 6 out now, I think I could always just start up Tropico 4 and enjoy the game as if no sequels were even out. 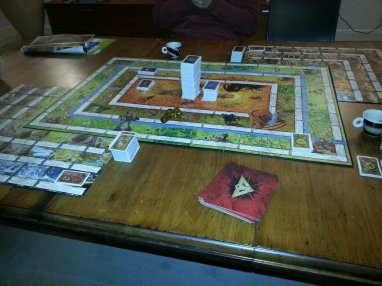 I did, yes. My mum’s had budgies when I was little. We’ve also had hamsters. And while other girls were all about ponies and horses, I’d always only been going on about wanting a rabbit. When I was 6, I finally got one. At first, I had a rabbit but it was ill and died within two weeks or so. Oddly enough, I don’t remember it at all. Only vaguely that it died. I still clearly remember the day we went to the pet store to buy a new one. I also remember that on the bus trip home, my mum and I had a lengthy discussion about its name. “Cloud” (because she was fluffy as a cloud) wasn’t a good enough name. Neither was “little cloud” (I’m translating the name here, of course, so you get the meaning). We settled on Cloudie (again, translated, but it didn’t sound any less silly in German – as you’d expect if you let a 6 year old choose a name). She later had babies (because a friend hadn’t known how reproduction works and had let my rabbit out with her rabbits who were male) and we kept one of them while the other went to said friend’s family. A couple of years later, after my rabbit had died, we got a dog. The story can be read about here. Bookahnerk and I currently don’t have the space or the time for pets, so we don’t have any. I would love to get some budgies, though. But first, we need to get the flat in a state where it’d be save for birds.

3. Your favorite developer/publisher chose you to design their next game. Budget isn’t a problem and you can hire whoever you want to help out. What kind of game would you make?

Oh boy… while I love MMORPGs and would definitely love designing an MMORPG where budget isn’t an issue, it takes too much time and I’d probably not want to deal with the headache of balancing features, expectations etc. that come with a full MMORPG. So maybe a smaller scale RPG-like game that can be played with others. More a Guild Wars-style game, that is (the original,  not Guild Wars 2). Still online with hubs where players can meet, but the maps are limited to individual parties. I would definitely include battlegrounds, in the style of World of Warcraft and, of course, Guild Wars. A huge focus would be on crafting and an active economy. Playing a crafter that doesn’t go on adventures and doesn’t kill anything would be completely viable. Housing would also be in it. In other words, a game where you can ‘live’ in, but that doesn’t solely focus on combat and making you the strongest special snowflake around. If you want to be a social character or concentrate on crafting or decorating your house, you totally could.

4. You suddenly got god-like powers. Limited god-like powers. They are so limited that all you can do is remove one species from this world and bring one back from extinction. Which ones would you choose?

I’d keep it for the moment when the wild bees have gone extinct – if they do. In that case, I’d get rid of humans and bring back the bees.

5. What fantasy or science fiction race do you identify yourself the most with and why?

Dwarves because they like beer? But seriously, humans. Yes, it’s boring, but I’m definitely not an elf or a goblin or a gnome or an asura. Maybe the Undead from World of Warcraft. I like their humour, at least.

6. You died in a freaky, embarrassing accident. When you open you eyes you are in front of a goddess who gives you two options:

Option 1) You can either reincarnate in the real world as a newborn baby to a random  family without any memories of your previous life.
Option 2) You can be teleported, as you are, to a fantasy world with your choice of a magical item. However if you choose this option you must defeat the Demon Lord that is plaguing that world.
Which option do you choose? If you choose option 2 what kind of magical item would you pick?

Option 1. Sounds easier and safer and I’d enjoy a few years of leisure, playing, not having to work or risk my second life fighting against a Demon Lord.

7. You are trapped in an isolated location with five random strangers with no way to communicate with the outside world. There is also a killer on the loose. How many people die and how do you survive?

The location can be anything you want. (a cabin in the woods, a scientific station in Antarctica, even an extra-dimension) Same for the killer, it can be as mundane or as supernatural as you want. However the killer cannot be destroyed, at best it can only stopped long enough for you to flee.

I would start by having the group agree that we do not split up. Ever. Under any circumstances. Other than that… may the fastest one survive?