For a while, I’d been very excitedly levelling my guardian in LotRO and was really happy when she’d gotten to level 50. But then, a few levels into Mines of Moria… I stopped playing.

I had also missed the announcement that Mirkwood launched despite reading the dev tracker regularly. They added it in a post that I thought was only about the regular live servers. Anyway, I knew I had to level my guardian further and out of Moria to see Mirkwood again, so I decided to give the game another try now – It was bad. Really really bad. I sat here cursing at the screen and was about to log off. For half an hour I had tried to find that one spot where I was supposed to kill a few NPCs but I kept walking in circles. I also increase the brightness on the screen that I play Lotro on to see more when I’m in Moria. I even have the short cut to that setting pinned in my task bar. I already commented on it back in November about how much I hate Mines of Moria. The problem isn’t even the zone itself. I think they captured that feeling perfectly: You are lost within these huge mines. There are even several lost dwarves in there! I, the player lacking orientation skills, am lost all the time. So in a way, it’s a really great design. But since I want to spend an hour levelling my character in the evening, having to run around trying to find a certain spot for half of that time is not good. It’s frustrating and it feels like wasted time.

It is similar to Guild Wars 2 with its vertical maps in Heart of Thorns. I remember that I wasn’t the only one who disliked it. And yet, even though I am still not a fan, the most frustrating part was just trying to get somewhere and being killed by NPCs on the way there as the maps were swarming with them. Or falling off the sky because the timer for gliding had run out. The vertical maps added to that frustration, of course.

So, while vertical maps do add a level of reality to the game, especially in the case of the mines, it also adds frustration to some players like me. But there is a solution to that and one thing that I think makes all the difference between Mines of Moria and me not playing the game anymore for several months and Guild Wars 2 and playing through Heart of Thorns while being annoyed once in a while: informative maps.

Let’s take a look at Verdant Brink. The map has three levels. The top level shows the land mass that belongs to that level with the land mass of the lower one faded out in the background. Additionally, Guild Wars 2 has waypoints that you can access anywhere in the world which means that you can get closer to where you want to be without having to ride or fly there first. You can like or dislike this way of travelling, but it certainly makes it much easier to implement vertical maps. And the maps show when there’s a ramp leading up or down to the other level.

Now compare that to Mines of Moria. You can see the map of the zone “Foundations of Stone” on the left. I have a few quests here. The arrow shows where I’m standing and which direction my character faces. According to the map, I just have to step forward and then move slightly left to get to the yellow quest ring. The second picture shows the reality. Now this part is actually pretty straight-forward. You can either move to the right down the slope and then to the left or you jump down there (it’s not lethal) and then move there. However, I have found myself facing not the cliffs, but walls, more often than not. You can jump down a cliff, but you can’t climb up such a wall. This whole map is basically useless as it doesn’t show any of these obstacles. 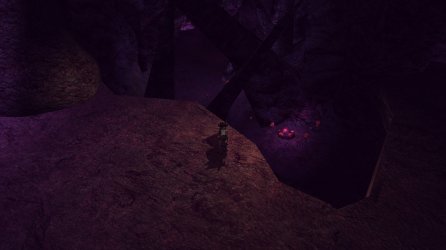 I took my guardian out of the mines to Lothlórien, by the way. Once I’d been there, levelling was very fast again and now she’s almost level 60. I’d been thinking about levelling a runekeeper as well, but I am not so sure now. That’d be another 10 levels of trying to get through Mines of Moria…