I did say I’m giving Elder Scrolls Online another try, didn’t I? But when I was looking for an alternative to Rift, I also remembered LotRO – well, that, plus they announced the Legendary server. I have a lifetime account, so returning is quite easy for me. You get shop currency once a month with this type of account and I’ve got enough to get everything I want, basically. Which is the expansions, the high elf race and Beorning class upgrades etc. In fact, I irregularly started the client again to get these things, just so that they’re waiting for me in case I want to play the game again.

LotRO is older than Rift and in a lot of places, you can tell. But the graphics are still gorgeous and as picturesque as I remember them! It also feels as if the game has more players than Rift does. This could have many reasons, like fewer servers (I didn’t count them!) etc. But even if there were fewer players, having the impression that there are more is always good in an MMO.

I don’t remember when I did that, but I did get a level 50 boost at some point and apparently boosted my guardian. I had previously played warden, but when they changed the way traits and skill trees work, I lost interest in her. The warden’s class mechanic is also not very forgiving when you stop playing the game for a year or so. You’ve basically got three skills (coloured in red, yellow and green) that you can combine. The shortest combination is two of these skills, the longest one is five. Depending on the combination, these form a different more powerful skill to use. But you basically need to memorize these combinations. I know I had a little “cheat sheet” right below my monitor (like this), so I could quickly look up the combination I needed in any given situation. And I know that for a casual player, I’d been quite good.In fact, the warden is one of the most fun classes I’ve ever played in any MMO. But nowadays, it’s just too stressful having to memorize all of that. The guardian is more the classical tank and much easier to play. 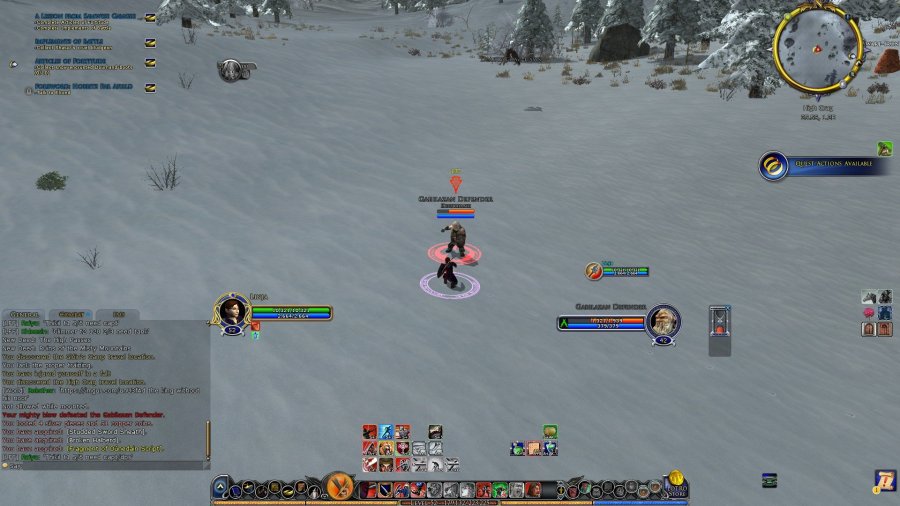 The only downside is her name so far. Linja… short for “little ninja” as she’s a hobbit. No, actually, I forgot that “j” is pronounced differently in English than in German. The name was supposed to be “Linya”. I guess it’s not too bad, but I am one of those players who spend quite a lot of time thinking of a good name for her character. The “worst” and less roleplay-fitting names I’ve ever had were “Kuhlio” for a tauren in WoW (pronounced “Coolio”, “Kuh” is German for cow), but I deleted him quite fast, and Charlotta in Guild Wars 2 for my charr. Then again, I have more than enough shop currency to buy a rename if it really keeps bothering me that much. It’s cheaper than boosting another character up, at least.