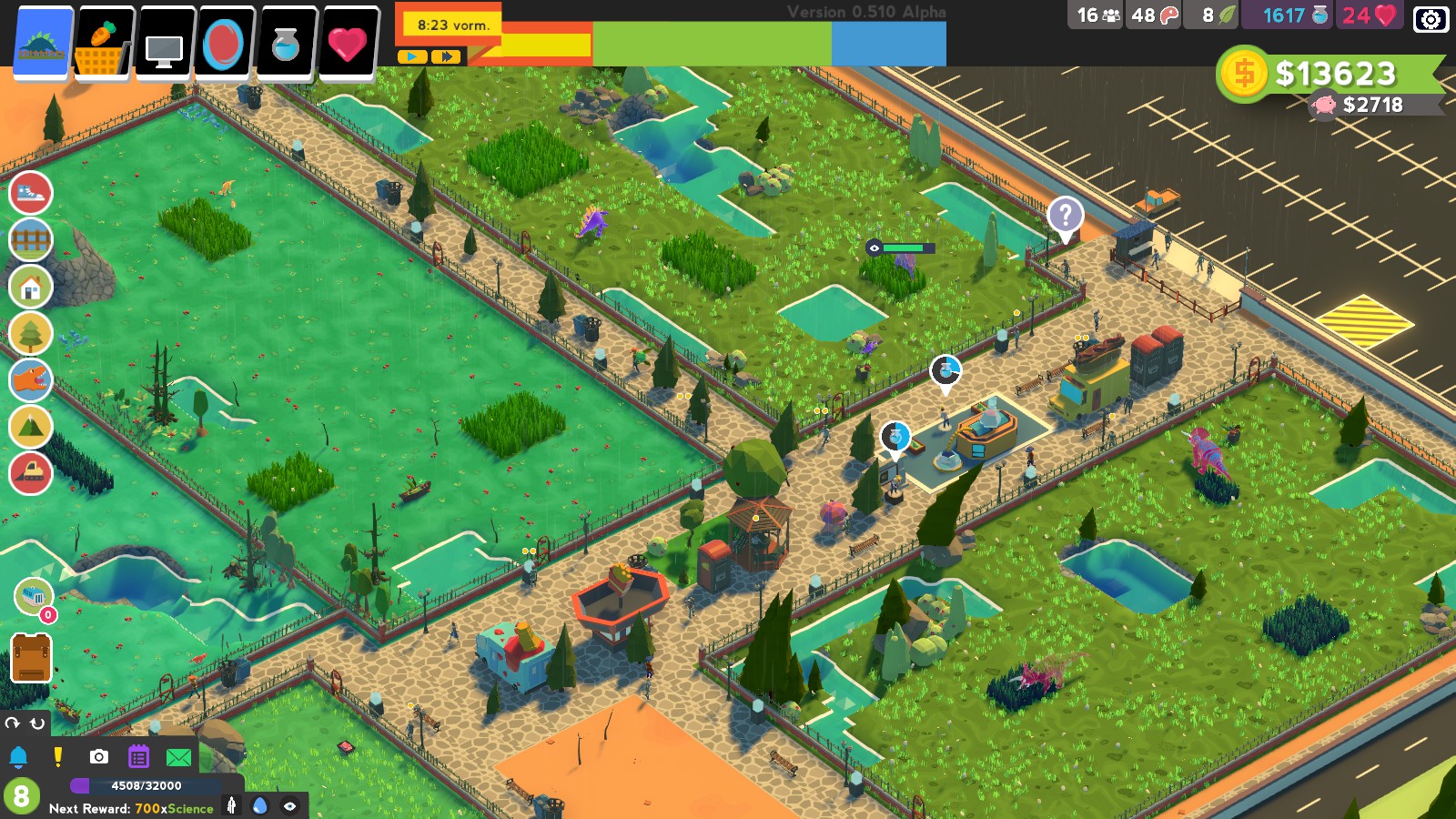 Parkasaurus is a tycoon game where you get to build a dinosaur park. The game comes with cute comic graphics, but it has the depth that one would expect from a typical park-building game – or will have them at some point. It just launched into Early Acess today (with a price of 19.99 €), so not every feature is in the game yet. The developers have a roadmap where you can see what’s still coming. You can also join their Discord server and get in touch with them and the community. Speaking of the developers: The game studio, Washbear Studio, consists of two indie developers. If you don’t want to take the risk of buying an early access game from a small indie studio, wishlist the game and just watch what happens with the development. Now that all of this has been said, let me tell you about my game experiences! I was a playtester before the game entered Early Access, so I’ve actually spent several hours playing the game already. Since I don’t know how much I can reveal about that, I will only show you screenshots that I made after Early Access started. You can choose to play the “regular” game where you can get achievements or you can play a custom game with no achievements, but you can choose several things, e.g., if all science is unlocked already and if you want lots of money to build with! I tried this once, but generally prefer playing the regular game. I have also never had a problem with money so far. But more on that later. You can also choose to skip the tutorial. In that case, you get a stegosaurus egg to start with (at least, I never got anything else at the beginning). If you play the tutorial, you get the choice between a triceratops or a stegosaurus egg. Since the stegosaurus happens to be my favourite dinosaur ever since grade 3 when we learned about dinosaurs, I am more than happy to just skip the tutorial by now and start with that one. As you can see, my poor Ottilie doesn’t like crowded places. This certainly makes building exhibits more interesting! Fun fact: You can apparently change the colours and attributes of your dinosaurs when they’re still in their egg by adding fossils to them. Even the developers don’t know what causes which change, though. At least, that’s what one of the developers said in their Discord channel.

The game offers everything that you’d expect from a typical tycoon game. It lets you build exhibits which needs certain things like trees, water, a food trough. But you can also make it prettier by adding more of that. Then there is a variety of decorations for your park as well as food trucks, restrooms etc. for your visitors’ convenience. You earn money by selling entrance tickets and food, but these two are negligible. The huge chunk of money comes from exhibit donations! So don’t ever forget to put up a donation box next to each of your exhibits. I don’t know if more lead to more donations. I just prefer putting donation boxes every couple of metres because I like to pretend that if my visitors have to walk for longer than a dinosaur’s length, they will just not want to donate anything anymore. There are several kinds of employees you need to hire. The veterinarian feeds your dinosaurs and makes sure they’re healthy and so on. The scientist gives you science which is important for the science tree as well as exploration. The security will tranquillize your dinos if they’re trying to escape, but also when you order them to. This is important if you want to relocate a dino! And then there are, of course, the janitors. The backbone of every good park. They make sure it’s running smoothly, that nothing smells and that the fences get repaired because your dinos will break them down! Your food trucks are self-sufficient. You buy them, place them down and never need to worry about them again.

Back to the scientists and the science tree: This tree is where you unlock decorations, food trucks etc. – and gems. Once unlocked, you can buy these gems in the town screen which are needed to get dino eggs. Other than that, you can send your scientists on exploration. In the exploration map, you then dig for fossils. The fossils together with the gem are needed to create a dino egg. One more thing about food trucks: You unlock perks for them in the science tree. Some perks increase your visitors’ happiness, others increase their desire to buy some other kind of food or drink. 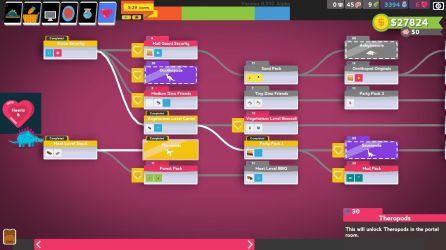 In the beginning, you can only go dig for ceratopsia and stegosauria. If you want another dino family, then you need to unlock them at the heart tree. At the end of each day, the game calculates how many happy dinosaurs you have in your park and you will get hearts based on that. With these, you unlock not only new dino families, but also upgrades and improvements for your exhibits like larger feeders and shelter buildings for your dinosaurs to sleep in. You also need to make sure that not only the basic needs like food are covered. Dinosaurs also want their privacy which needs to be balanced with the visitors’ “need” to watch dinosaurs – or else they’ll be unhappy and won’t donate their money. There are currently 23 kinds of dinosaurs in the game. There are none that live in the water or fly, but these may get added in the future. The dinosaurs need different amounts of space depending on their size. They also need different biomes which you create by placing either grass, sand or mud, then adding different amounts of water, hills and plants, bushes and rocks. 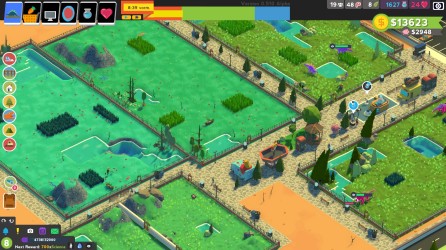 One thing that did annoy me in the beginning was the lack of a proper pause. You can open the menu which stops the game, but then you can’t watch your park anymore. It is intended that you can’t build while pausing the game, though. In their Discord server, they said that they are thinking of adding a pause-function where you can just pause the game and watch your park, but it’s not certain yet. After playing the game for a couple of (in-game) days, I tend to agree that it’d not be a good idea to be able to pause the game and then build stuff. Everything you do, you do within one day and it feels like a very good flow to improve your park this way. At the end of each day, you will get the money you earned during the day. Sometimes, very rarely, you may run out of money before the end of the day because you built too much. It’s nice just leaning back and watching your busy park for a while then. At the end of the day, you’ll also be shown the stats window. You can browse and read and check that one for as long as you want, before you start the next day.

I am not really a fan of the silly costume items like hats and glasses, but I admit that I still used some. Especially the glasses on a large dino as they looked too good on him! What I love are the animations of the dinos… when you see a triceratops baby rolling on its back for fun, you can’t help but go “aawwww!”. I haven’t yet found out if, for example, a triceratops and a stegosaurus can be put together into one exhibit. They both need the same biome and they don’t eat meat, so in theory, they could get along. But they’re also both herd animals and need to have others of the same species around. So putting all of them together would require a pretty huge exhibit. I don’t think this game is particularly difficult, but it’s great fun! And it only just started Early Access. The science tree unlocks too fast. I forget it for a couple of minutes and can unlock several things in there, so that I don’t even remember what I just got. The heart tree is much nicer in that regard. It’s slow and I am looking forward to unlocking X or Y for a couple of (in-game) days. Money really isn’t difficult to get. I start explorations where you can also earn some extra money and then there’s the huge amount of donations. That still doesn’t mean that I can just build whatever I want! Yes, I get a lot of money fast, but not that much that I can just go and place exhibit after exhibit. I also think that it’ll be quite difficult trying to get all the dinos in your park, making sure that every one gets enough space and so on.  I can’t wait to get so far into the game that I can put a tyrannosaurus rex in! Although, as I said, I personally love the stegosaurus. I just somehow think that I “made” it in the world of dinopark owners once I can show my visitors at least one tyrannosaurus rex. 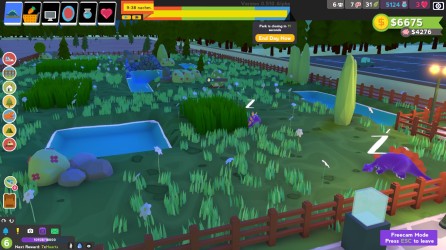 My current verdict is that if you don’t mind the risk of an early access game, but you love dinosaurs and tycoon games, then check out this game! There are also people streaming the game now and there are reviews coming in on Steam, so there’s plenty of places to get more information. I, personally, am curious to see where this game’s heading.

The usual disclaimer: This is an Early Impressions Review and does not claim to be a fully grown objective game review. It does, however, reflect my personal and subjective experiences with the game.