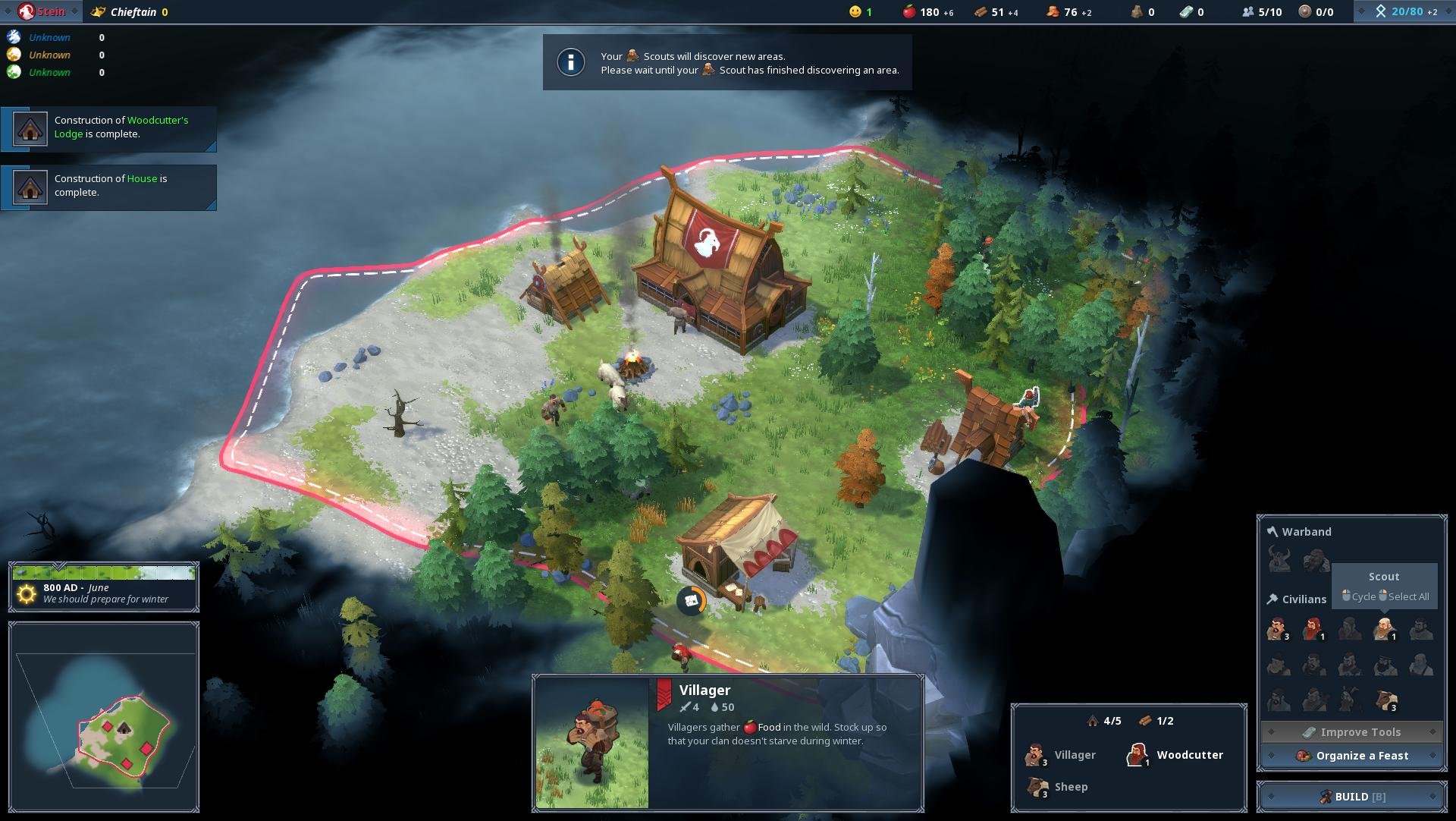 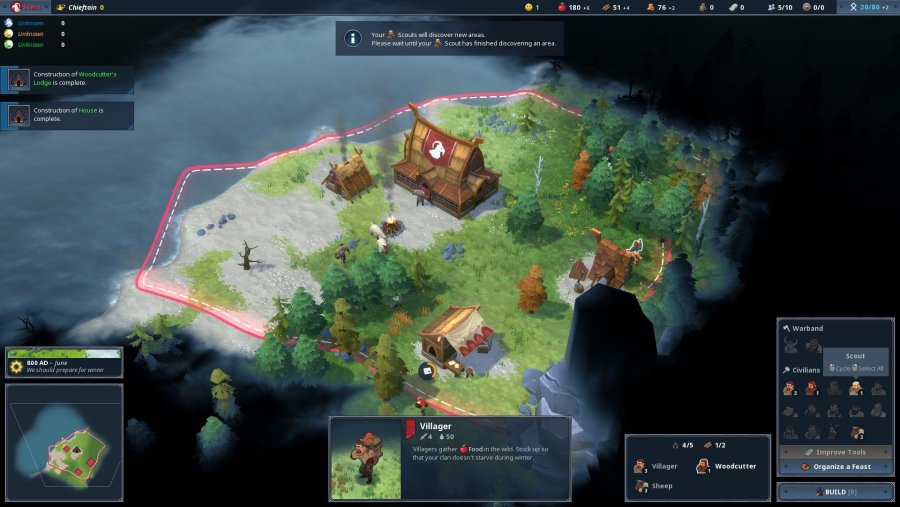 Now, for the most important part: What exactly is Northgard? – To answer this, let me first ask you: Did you play Settlers? Did you play Cultures (shown below)? If you did play Cultures, come here, sit down, take a cookie, say hello and be my best friend! Cultures is the game that got me into gaming in the “modern age” (after my C64-days). Cultures was – is, rather – a game about Vikings. It has single player campaigns and multiplayer coop and PvP maps. I liked it a lot more than Settlers, because you could name every single of your Vikings and you assigned each of them their job and determined which one got married and so on. 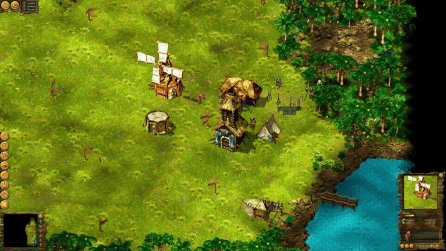 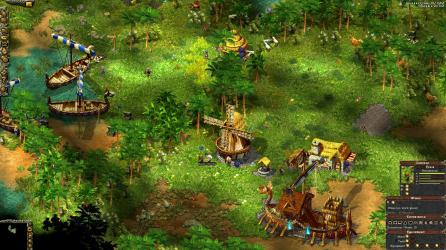 My main problem is: There is Cultures and it got so many things right in my opinion. And here is Northgard. A new game just freshly released into Early Access. Several features like multiplayer are not yet implemented. But even when all features are in the game, I need to remind myself that this isn’t Cultures! Comparing it directly will only disappoint me. But enough about these games. I merely mentioned them, because when I saw Northgard, I immediately had to think about Cultures and after Valhalla Hills being rather disappointing, my hope was that Northgard would be a worthy successor. However, it is probably better to keep that nostalgic feeling at the back of my mind and look at Northgard with fresh eyes. Shiro Games are different developers and apparently they (or one of them, at least) did not even know the Cultures series existed. Shiro Games are the developers of Evoland and Evoland 2, by the way. I never played these games, but I know the name. Northgard still very much reminds me of Settlers and Cultures. It’s a real-time strategy/simulation game where you build and grow a village of Vikings. You need to gather resources and food and defend against various enemies as well as attack others to gain more regions for your tribe! 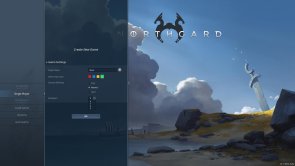 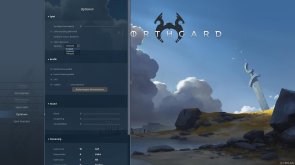 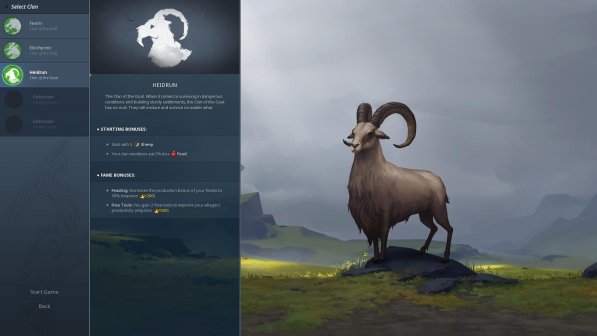 So, let’s look at Northgard: You start with a tiny little piece of land and a few villagers. There are only men around which I am not a fan of. Yes, I know there is always a huge debate whether there were women fighting for the Vikings, but that’s not what I mean! It’s a village. It should have men and women. In Cultures, women tended to the house, brought home food (= carriers ^^) in Cultures 2, they also took care of bringing home dishes and stuff and they gave birth to the Viking children. It just made it more believable!

The first thing you will probably build is a Scout camp. Scouts explore the surrounding areas. Your territory is very small and you are only allowed up to build 4 buildings in there. So you need to expand and claim more areas for yourself (and you can only build 4 buildings in each of them). Then you do what you usually do in this kind of game: You place a woodcutter lodge, a hunter’s lodge if your area has deer, maybe you can place a fishing hut if you have fish nearby. Of course, you also have things like a training camp for warriors or a defense tower. Houses will allow more villagers to come to your village. The user interface is pretty clean, intuitive and easy to navigate.

Something I did not understand at first: In order to survive winter, you should probably have a fishing hut. Where I got placed, there were no fish, though. I also had no fertile land despite claiming three areas out of which one was very green all over. The game did not tell me what counts as fertile land. I started a second game to see if I had more luck there (spoiler: I did! I found fish, but no fertile land).

Fighting is very straight-forward. Tell your warriors where to go, right-click the enemy. I had my two warriors die to wolves. After recruiting two new warriors, I was a bit surprised to see one of my warriors still alive. Maybe I’d just had tomatoes on my eyes? I told my two new warriors to join their buddy – by right-clicking on him. The next thing I knew was that a message informed me that the leader of the neighbouring clan was not happy about my hostile action. Now I know that a) the warriors aren’t too easy to distinguish (or I do indeed have tomatoes on my eyes – both equally possible and likely! ^^) and b) the other clans don’t immediately go to war just because you accidentally killed one of their warriors. Good neighbours, I would say. The kind of neighbours I like. Such a simple little unimportant mistake shouldn’t lead to resentful actions, right? But without fish or fertile land, I decided to start a new game and see where I would be placed here. Maybe I would be luckier… 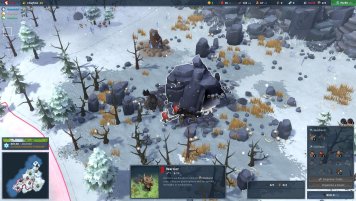 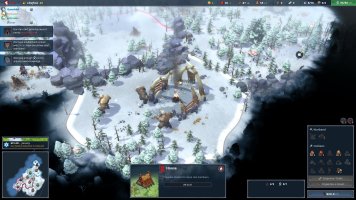 The second game indeed went much better: I had fish! But I was at the maximum of 5 Vikings and I needed more to grow (and I had negative food production, that is, more food was consumed than produced). I wanted to hurry up with the wood production as I was lacking wood for another house and added my last free Viking to the woodcutter lodge. Then there was no Viking left to build that house. But no problem, I’ll just unassign… nope. It’s either not possible, not yet possible or I could not find the option*.

Thankfully, I had a warrior standing around that I decided to send into a kamikaze run to nearby enemies, so he’d die and I could have one more Viking which would come to my village with no assigned role! Other than assigning regular villagers to build buildings, they gather food in the area when they have nothing else to do. At least, when it’s not winter. I like this little touch of having the seasons affect the game!

There is also something like a tech tree in the game. I am gathering lore points a— HEY! While I was typing this, the game made a weird sound… it was the clear sound of an alarm! The minimap showed one of my areas flashing in bright red. Something attacked me! But no, not something. Somebody. The one clan I had found already which had been neutral to me. Apparently, as we are right next to each other, as it’s winter, and as I have fish, they thought they could just attack me! I had also just sacrificed my one warrior, so I was defenseless. I am happy to report, though, that you can assign every Viking to your training camp to convert them into a warrior. Two warriors later, my area was successfully defended but I am down to one warrior again. And only one woodcutter, but I had only wanted to have one in the first place. So no big deal. Except that I had no food anymore and still had a negative production, because there were no free villagers left to gather food. But one new villager arrived just in time! Phew. We’re safe!

Back to the lore tree: Once I am at the maximum amount shown (which is 100 lore in the beginning), I can unlock something. I decided my warriors should get fur coats, so their attack power isn’t reduced in foreign areas during winter. The next unlock costs 120 lore. 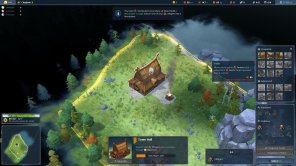 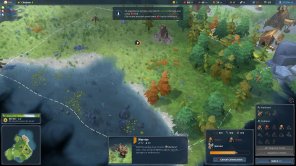 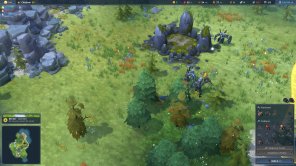 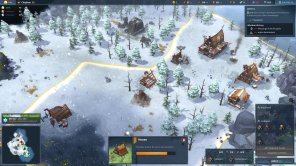 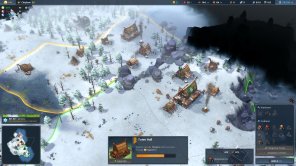 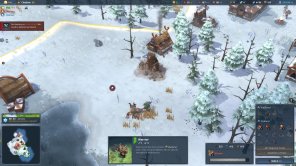 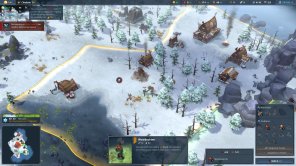 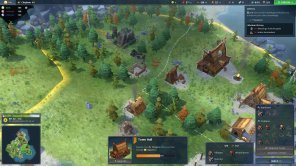 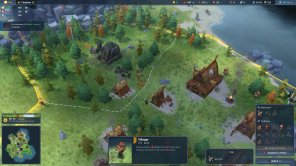 Just so we know that this is not everything to the game… look at that black cloud on the picture. It appeared together with a pop-up tooltip window informing me that portals opened and I would have to make sure my defenses are strong enough…

And with this, I am going to end my very first impression piece.

What’s the verdict here? So far, the game runs smoothly on my PC. No technical issues, no bugs that I noticed – and just when I was wondering whether it could become a bit too boring, the neighbouring clan attacked me! So far, so good. Northgard is in Early Access, so the game is still being developed and more features will be added. I do not regret the purchase! Speaking of purchase: ‘What’s the price?’ you may ask. It’s currently on sale for $17.99€ on Steam Early Access until March 1, then the price will go up to $19.99€. Still a good price if this is the kind of game you enjoy playing!

However, as with every Early Access title: Choose wisely whether you want to invest now as the game does lack some features! Inform yourself first and make the judgment based on what is there now, not on what could maybe eventually end up in the game in the not-so-soon future. If you like what you see, then yes, go ahead and buy the game! It isn’t expensive, after all. If you’re uncertain, better wait and check YouTube or Twitch for Let’s Plays before making a decision.

*It’s the latter. I looked at the steam community hub for this game and found a thread about this where they mentioned how it works: You select the worker you want to convert back to villager and send him to the Town Hall (the main building you start with) or to one of the houses you’ve built and that puts them back to being a regular villager. It also helps spreading houses around the map as it means less travel time for this task.