I sometimes buy game bundles that come with a bunch of codes for games I never even looked at before… or I can’t resist that sweet tempting “mystery game for 0.20 €” offer. Either way, these games are often not even looked at once I have them (well, more so for the bundled games than the one I actually did buy even if I didn’t know what game it will be). I figured I should devote this column here to these games. On the one hand, it makes me actually look at the game and on the other hand, sometimes I buy bundled games because I want to get game A and then I end up ignoring it because one of the other games in the bundle turns out to be much more fun!

I have a bunch of games that qualify for this column and wasn’t sure which one to pick. Then I saw something that looked… weird… but the name sounded rather bland, actually. So this is what I chose: Jazzpunk by Necrophone Games. I bought it as part of a bundle with Overlord.

Let’s take a look at the game: The introduction video sequence is very… colourful, at least. But it doesn’t tell me what this game is about. I actually only read this one sentence before jumping into the game:

I decided not to read too much about each game before playing it. Without much prior information, I figured I would experience the game in a much less biased way. I made one mistake here, though: I should at least check whether a game is in first person view or not, because it does give me nausea. Jazzpunk’s graphics are very basic, and putting mouse sensitivity on very low lets me play this game for a bit longer than other games before I need to take a break. But the next games I will look at will not be in first person view. It’s just not fun to play and write about a game that makes you feel sick, right? But something still made me want to give it a try, at least.

In the opening scenes, I see that I apparently flew in (to where, I don’t know… but there are Asian symbols, I think…) in a man-shaped suitcase. Very subtle, right? And then I am… somewhere… and get my first mission from a guy who claims to go to his wine cellar after briefing me but actually just lay down to sleep on the floor behind his desk. I have to take some kind of pill for the first mission to start. No idea what that part is about, really. I assume I would find out later on in the game.

Now the bad part is that the voices are all kind of hard to understand and there is no option for “real” subtitles. In most cases, there is a short line repeating what the characters said in a short sentence. But still, a lot gets lost unless you have the sound up and understand them.

Bookahnerk was watching me play and remarked that it seems to be similar to the Stanley Parable. I guess that’s right as I still don’t know what I’m supposed to be doing. My task was to infiltrate a building, but that’s the only pointer I got. It’s not like Stanley Parable in that a speaker narrates what I’m doing. Instead, in Jazzpunk I can actually interact with objects and after using a copy-machine for taking pictures of my character’s naked butt, I used a picture on the wall (with a face, not a butt) to fool a camera-activated door to open for me. So it is a puzzle adventure game, but the atmosphere reminds me of Stanley Parable. Jazzpunk tries to stay light-hearted with silly jokes, though. One more example: The room where I took butt-pictures also has two microscopes. One let me play asteroids. No, it doesn’t make any sense, but it was fun! Too bad it was just one level.

I played through the first mission now after looking for a walkthrough online. I admit, I suck at puzzle games, but I still like playing them once in a while. My usual method is to try to figure out how to solve it on my own first and when I get stuck, I look at a walkthrough. My main motivation is not to solve everything on my own, but to get some entertainment value out of it which means that the storyline also has to be good. Fortunately, this seems to be the case here. Of course, having done only the first mission (with help), it’s a bit early to say the story is fantastic or even whether the story will still be good later on. But at least, there seems to be an overarching story behind me doing these missions. 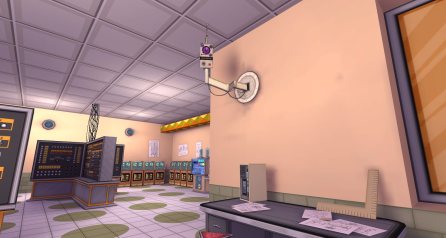 The downside of this game is that even though the graphics are simple, I cannot play the game for longer than 10 minutes at a time. I wish I could, though! It’s silly and seems to be done really well. The interface is confusing at times, though. It says to hit X to cycle through my inventory, but when I picked up a second item, the first item was not in my inventory anymore. Instead, I later found a cereal box that I had already picked up and emptied on the table again just as if I had never even touched it.

Since I cannot really delve into the game longer, I’m looking at the Steam reviews: The game recently got 99 % positive reviews. The overall percentage of positive reviews is at 90 %. So, if you like puzzle games and weird silly stories, this seems to be a great choice! But only if you can play with first person view. For me this one simple thing means that it is not a gem and I will uninstall it again.