I only just wrote about Wildstar’s housing and wondered whether you could get the housing teleporter and now they added it to their store for the cost of 720 NCoins. I assume that once the game launches on Steam, it will appear as DLC in their store as well. 800 NCoins cost 10 €, so this is 9 €. Granted, it’s more expensive than it was back when we bought it as part of a Humble Bundle. But that’s the whole point of the Humble Bundle, right? To attract people to buy stuff and then maybe add a bit of money on top.

Anyway, I thought I’d take a closer look at what the Jumpstart Pack offers, in case you are wondering whether it’s worth your money.

The Jumpstart Pack includes several items. Some are multi-claim and some can only be claimed with one character. Multi-claim means that every character – present and future ones – can claim the item as often as they would like. So don’t worry about accidentally deleting that item, you can get it again at any time.

You can probably already guess that those 5 gold cannot be claimed by every character as often as you want! So, this is a one-time claim. The same goes for the bag, the Housewarming Gift Pack and the Flask of Advancement (not pictured).

This means that the Protostar Housing Teleportation Unit, the blue hoverboard and flair and the Shardspire Canyon FABkit can be multi-claimed.

Let’s get into more detail on what it is you would be getting: One character gets 5 gold. One character gets a 16-slot bag. Just to be clear here: All items can be claimed independently, so the 5 gold and the bag do not have to be claimed by the same character. Also, my main character has 14-slot bags equipped. I did not try to get bigger ones and I don’t remember where I bought the 14-slot ones or how much they cost me. But this means that if you are just starting out, a 16-slot bag is very nice to have, even if it is just with one character. The XP boost is a nice to have, but it is not really necessary. I found I levelled fast enough in this game. However, some people want to level faster and for them, it’s definitely nice!

Now for the last of the single-claim items, the Housewarming Gift Pack. This actually contains three separate containers: Extra Exteriors Pack, Interior Visions Pack and Let There Be Lights Pack. You can see a list of the items when you click on the links. In short, the lights pack gives you lights like the rustic gas lamp post or string lights. You can see them all in the gallery below. 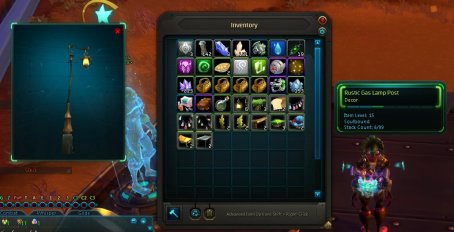 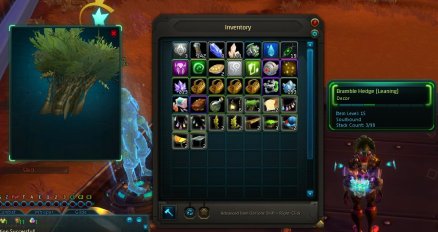 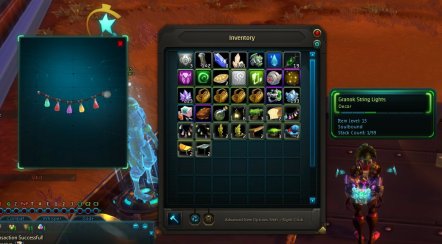 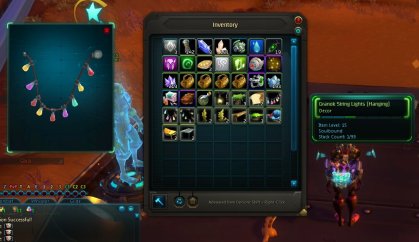 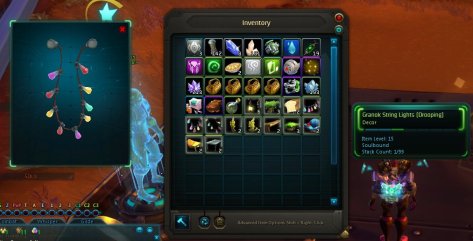 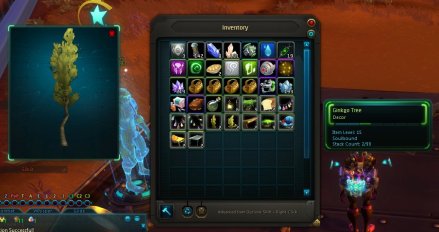 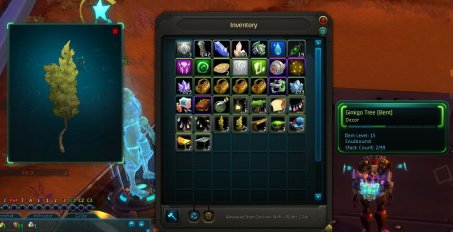 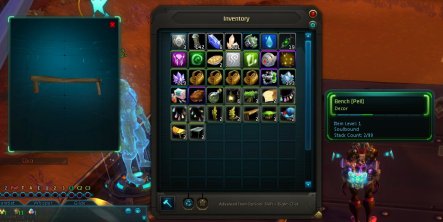 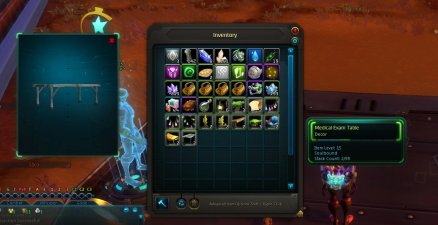 I am not sure about the value of these items. Some can be bought from the vendor directly for a few silver. Some others, like the unburnt toast or the taco, I haven’t seen before. I assume none of these are really exclusive. But they are nice to give you a start in housing. I would definitely suggest getting a better couch, though. This one has definitely seen better days. :p

That’s it for the single-claim items. Now on to the multi-claim ones. Those are far more exciting anyway, if you ask me. The Blue Steel Hoverboard is a mount. “Flair” is something that can be attached to a mount to make it look a bit different. After claiming it, you will find it in your inventory. Right-click it again. Then open your Collectibles-window. This one isn’t bound to a hotkey, as far as I am aware. I usually click on the lower left button which opens a window with all possible other windows. A bit like the Start button of Windows, so to say. What you will see there then is your Hoverboard (Blue Steel) without flairs. But here you can also click on and choose any flairs you may have unlocked. Blue Steel Grill for the front, Blue Steel Tail for the rear and Blue Steel Wings for the side belong to this package. 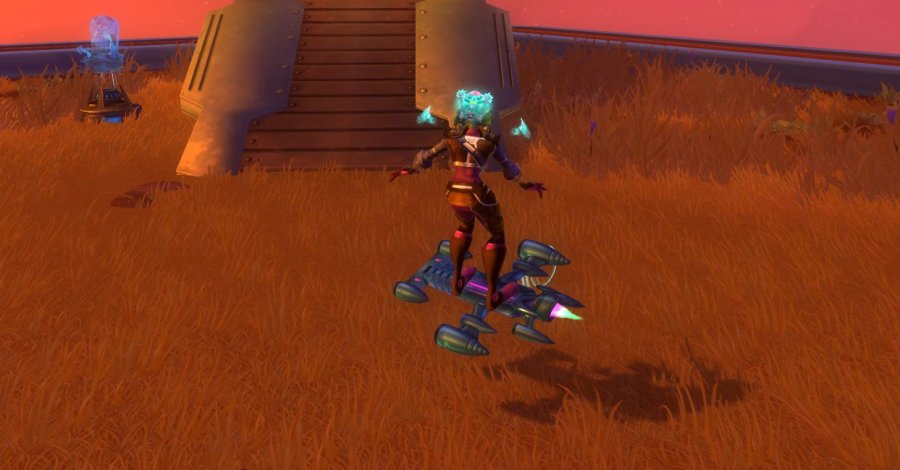 In order to start with housing and access your character’s housing plot, said character usually needs to be level 14. The Protostar Teleportation Unit allows you to click on it as soon as you are level 3 and you will get access to your house then. This is very neat, especially for alts, but also for those of you who just started playing and can’t wait to begin building!

Last but not least, there is the Shardspire Canyon which can be placed on your housing plot. It also offers you a challenge which is like a time-gated jumping puzzle. I haven’t managed to do it yet, though. But it looks really nice! It is apparently a world drop usually, so getting it in this package is a lot more reliable. Or maybe on the auction house instead. I did not check its availability or price there! 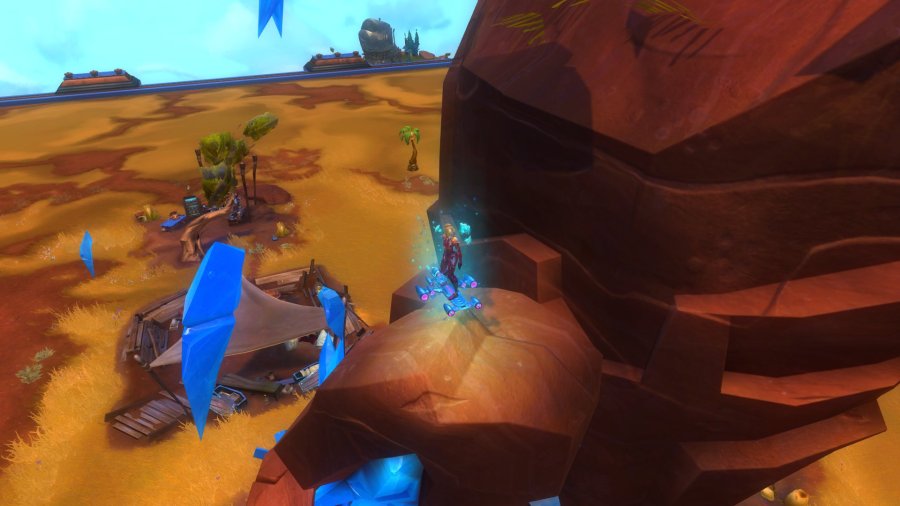 So the question that remains is: Is it worth it? It highly depends on what you care for. If you’re not into housing at all and don’t even want that low-level teleport for your character, then it’s probably worth a lot less. For those not into housing, you would at least get a multi-claim hoverboard mount with flairs. Other multi-claim hoverboards cost 2080 NCoins. If you really love housing, then the teleport will be convenient, but only when your characters are below level 14. Other than that, the FABkit is nice. But I don’t think I would buy this bundle for the FABkit. There are so many in Wildstar and you can only place a certain amount of special things like FABkits anyway. The instant teleport was what I really wanted when I bought it from the Humble Bundle on top of getting another hoverboard. Yes, I have several already and no, I don’t care. One can never have too many hoverboards! Especially if it’s multi-claim.

In a nutshell: For me it mostly depends on whether you can wait and level your characters to level 14 in order to access housing and if you like that hoverboard mount. Because you cannot currently get a cheaper multi-claim hoverboard. The other items are all nice to have, nothing is a complete waste of money within this bundle, so to speak, but none of these items are a “must have” in my opinion either.