There is one feature that I would truly love to see in Guild Wars 2: Archaeology from World of Warcraft.

Let me explain first what archaeology is, for those of you who may not be familiar with World of Warcraft and its professions. Thankfully, I even still had a 10 day free trial of the last expansion of World of Warcraft, so I could actually reactivate my account for free to show you these nice screenshots! All for you, my non-WoW-connoisseurs!

So, archaeology is one of the secondary professions in World of Warcraft. You can have up to two primary ones (e.g. tailoring, enchanting, armorsmithing – the usual), but your character can learn all available secondary professions (first aid, fishing, cooking and archaeology). The short version is: You go hunt for pieces of lore all around the maps and have a chance to get some nice rewards like mounts (well, they do exist in WoW, after all :p), mini pets, nice-looking weapons and so on.

When you have learned the profession, you see several available dig sites on the map. You have to go to such a dig site and click your archaeology skill. In the game, your character puts up a surveying tool and you need to look at the direction it is facing towards as well as the colour of the little blinking light. Move into the direction the tool is showing. If the light is blinking in red, then you are far away from a relic and know you can walk quite a bit – it could also be further left or right of where the tool is facing. If it is yellow, you are in medium range. If it is green, you are only a few metres away from the relic. Once you are within range and use your skill, the relic shows up. You can collect several relics at each dig site before you need to move to another one. Every relic belongs to one collection. It counts up based on the rarity of the relic (see screenshot above). Once you achieved a certain amount, you can “hand in” the collection and then start all over again. Every time you complete a collection, you get something. It’s random, but you can see what you will get as soon as you start a new collection.

Some items aren’t interesting, but some are really nice. As mentioned above, there are weapons, minis, mounts or other fluff items. What isn’t so nice is that each continent has three spots where you can go search for artifacts. That is quite a lot of travelling (no instant portals like in GW2 – instead, I’m on my flying mount). Additionally, some relics – and rewards – are quite boring with nothing lore-related to them. Some relics and rewards have flavour text, though, and tell you something about the game’s lore.

And that’s where I thought: Wouldn’t it be nice to have archaeology in Guild Wars 2?

Thanks to the predecessor, Guild Wars, we have so much lore to go through. And not only that, how awesome would it be for Guild Wars players to reconnect to past happenings in Guild Wars 2? Imagine all the possible artifact bits that we could find in Guild Wars 2! And those who never played Guild Wars could find out more about the world this way. It could be something to keep us very busy and on top of that, we could get some cool rewards maybe. I also think it would fit quite well with the Collections system that ArenaNet added to Guild Wars 2. Come to think of it, the collections system already is quite close to archaeology. Only that it is a lot more random and mostly happens along the way, instead of the player going out there to hunt specific collections. And – for me the most important part – there is no lore attached.

I already like the potential of collections, but with archaeology, we could focus much more on lore (while allowing those who don’t care to ignore it :p) and going out there to actively hunt for those artifacts than hoping for drop luck. 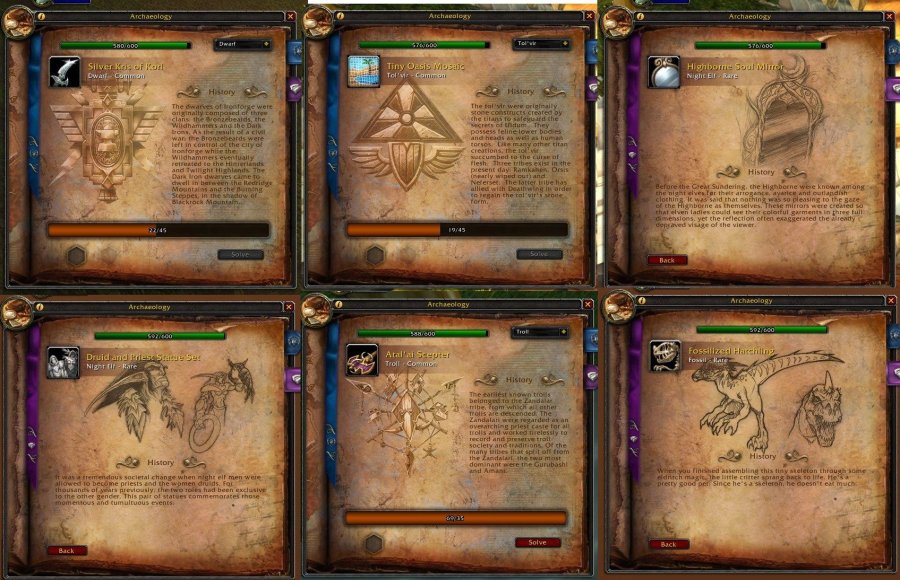