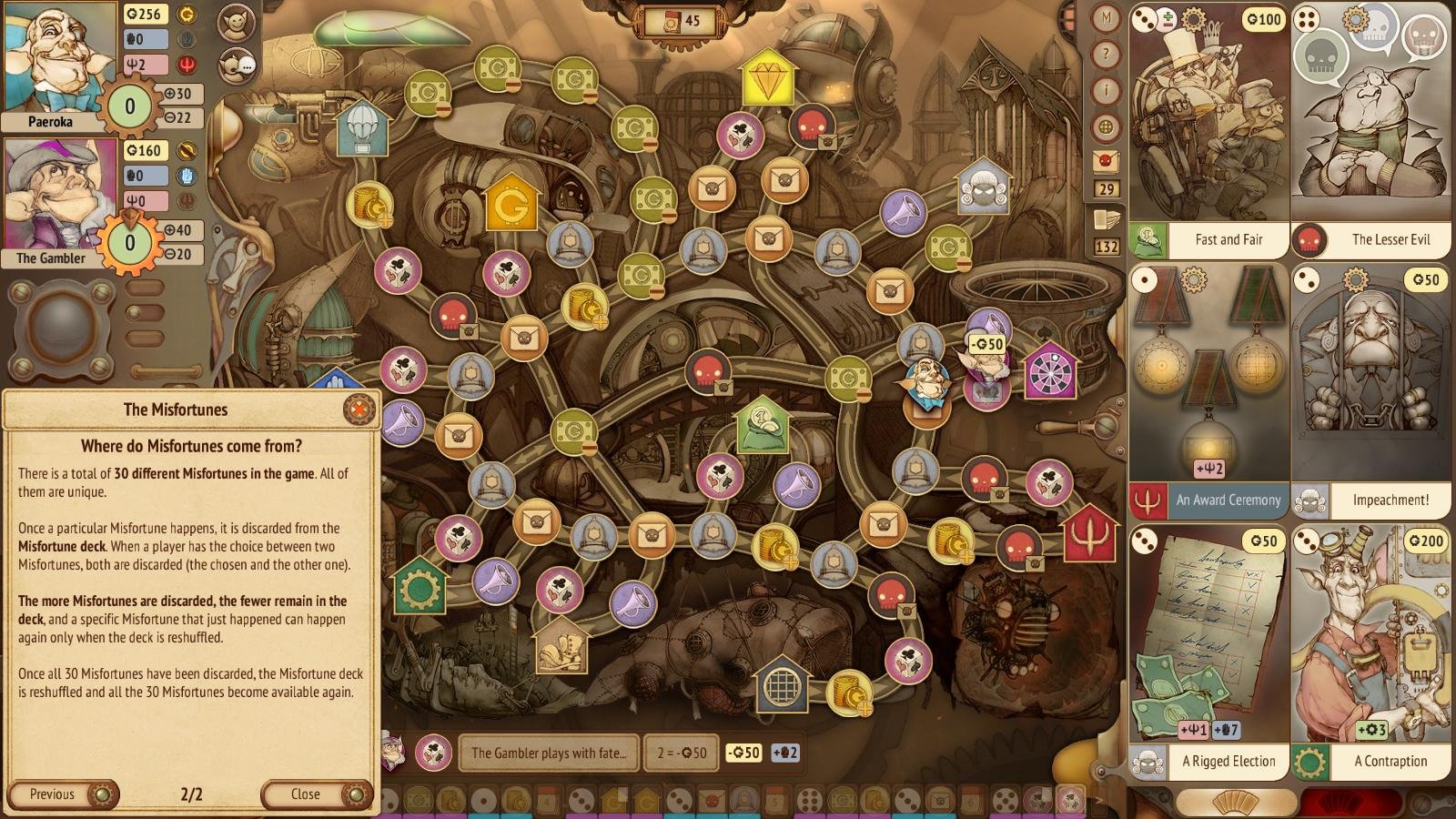 (Update: They have added the “save last session” feature with their update on January 22, 2016)

Steam’s Winter Sale just finished and throughout it, you could gain Steam trading cards for looking at the “Explore” queue of the store. I like getting those cards to sell them. Hey, even a couple of cents are nice to have! Most of the time, I clicked through, not being interested in the games (“recommended because the game is on sale” – Oookay? – “Recommended, because this game is popular!” – So what?). But one game caught my attention. I admit, it was mostly because of the face of a gremlin. :p I added Gremlins Inc. to my wishlist, then forgot about it again until the last day of the sale. I then looked at a few videos and decided that I want this game. It’s still in Early Access and was 10 % off, which is a good deal in my opinion. I mean, it’s on sale and not even released yet!

I had also looked at the Steam reviews before buying the game. One negative review said that the game lacked strategy. So far, I think that’s not true at all. Of course, it’s not strategy like the Civilization games, but it’s exactly as you would play a board game. When I tried to get into the game and wandered aimlessly, I lost. As soon as I started to understand more and tried to follow a certain goal, I won a match! Maybe “tactical” would be a better term. There is also lots of luck involved and some cunning, as you can try to hinder the other players and be annoying to them.

(Update, January 22 2016: This paragraph does not apply anymore. They added the auto-save feature for the latest single-player game with today’s update!)  I remember the developers of “Folk Tale” saying the same. Over time, the save feature got implemented and was buggy, while still being very limited (only one save game at a time). By now, it works as you would expect with several slots to save several games and no bugs left. So I assume (and hope ^^) that it will be like this here as well. Other than that, all basic features are in the game and I did not experience any bugs. The tutorial will be implemented later on. The text boxes explaining the game are doing an okay-enough job currently to get you started. I jumped into my first match after the short tutorial (only against AI, not against other players) and felt lost, until I saw that there are more text boxes popping up whenever something happened that needed an explanation. So, even without a “proper” tutorial campaign, the game does manage to explain its features to you. 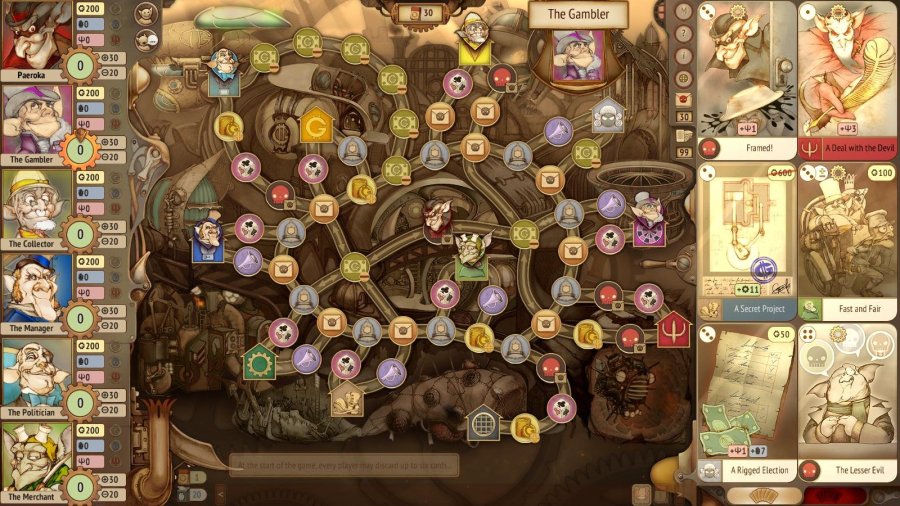 As I said, it’s a board game. You play as a gremlin. As far as I could see, you cannot choose an avatar, unfortunately. Not that it matters. It’s just your player’s icon. Still, it would be nice. So, you’re a gremlin and the others (up to 5 players or AI) are gremlins as well. You can choose different victory conditions (e.g., get 20 or 30 “gears”, play a certain amount of rounds or a certain amount of time and the player with the most gears wins the game). The game itself consists of one board with several paths between “main buildings” like the dump or the casino. Every field of the path and the main buildings have a certain “feature” (e.g., paying your taxes or receiving income). Some of those get activated as soon as you pass that field, others are only activated when you step onto it and end your move there.

Your main goal is to get as many gears as you can (or as are needed for the victory). You have 6 cards and whenever you use one, you get a new one. The deck will be reshuffled once all cards were used by the players. Here’s the twist with the cards: You can either use them when standing on the board game fields (the lower left icon indicates which field you can use them on) or you use them for moving around the board (the upper left dice shows you the amount of fields you can move). I have often found myself out of options (well, good options anyway), because I wanted to save cards to exchange them for gears or other nice rewards, but at the same time, I was left with no good options to move around on the board. For example, passing a red field marked as “misfortune” will give you said “misfortune” which is a card (from a different deck than the regular 6 cards you have). It will always have negative consequences. Sometimes only for you, sometimes for all players. Stepping and ending your move on that field will let one random other player choose between two Misfortune cards. So, you can safely assume that out of those two, you will get the worse one. :p

And with that, I already introduced you to the “annoy the players” part. The board itself already does a quite good job at it. For most cards that can give you gears, you will also need to spend a certain amount of money in order to play them on the appropriate fields. At the same time, the game’s fields and the “misfortunes” that happen along the way can cause you to lose quite a lot of money. I mentioned “rewards” for cards above. You don’t always get gears when you land on a special field and own a card for it. Sometimes, you also get a reward (e.g., money, votes which come in handy when the election for governor is happening, or other features) – or you get something mean to play on the other players! I think it is comparable to “Mensch ärgere dich nicht“, but with much better graphics. :p I regularly get send to jail by the other players, for example. In there, you roll a die to determine how long you’re going to stay there. It’s not like in Monopoly, where you can’t do much. In Gremlins Inc., you get to decide whether your behaviour will be good, neutral or bad. You also “level up” in jail by serving time in there and there is also a deck of cards which will give you certain events. You get one card per turn. For example, “get out of jail immediately” or “escape from jail”, but also “pay the bribe to get one less turn of jail time”. Some events are for good behaviour, some are for bad behaviour. If you chose neutral, you will get a card from either of those two. You can choose your behaviour at the start of each turn that you are in jail. 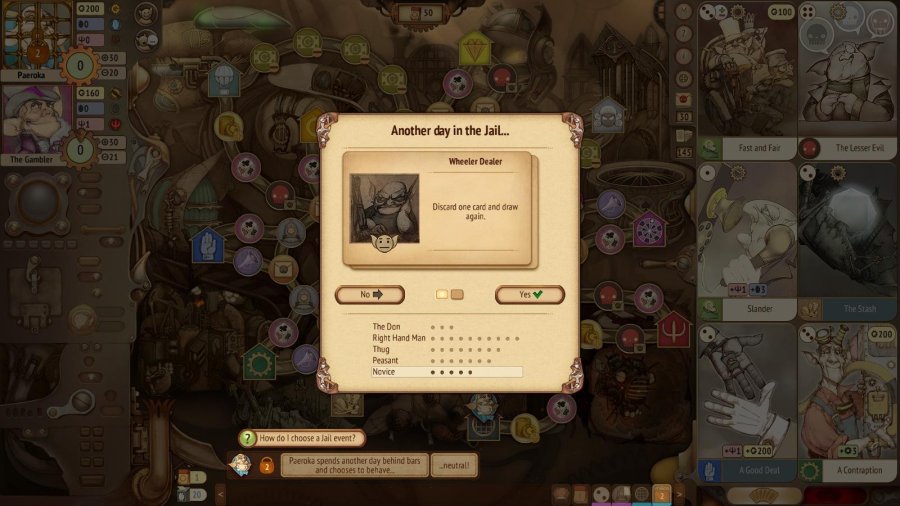 I have not yet played against humans. I admit, I like the atmosphere much better if the enemies are computer-controlled. :p There are apparently ladders/rankings and even tournaments planned or going on. Additionally, something I really love: You cannot directly chat with the other players. You can send emotes and pre-made messages like “Oops!” or “Be right back!”. I’ve seen this in Hearthstone already and I think it worked well. Much less to worry about when it comes to harassment.

After the sales discount and the money I got for selling the trading cards, I spent 7,29 € on the game. It currently costs 9,99 € on Steam (GOG will come later, I think). Is the game worth the full price? It depends (yes, that’s always my answer… :p). Watch one or two matches on YouTube or so, and if you like what you see and if you think you can be happy even if the game never gets a save option, then I think yes, it’s definitely worth it. Otherwise, wait for a sale or wait for them to implement the save function first.