In a few hours, the pre-launch patch will be deployed. You can find the full patch notes in the official forum. I am not going to rehash every little note in there, but will comment on a few aspects. So, let’s look at a few of my personal highlights!

With tonight’s patch, the European servers will finally arrive. Don’t worry, though, we will not get separated from the rest of the world (that is, the US servers :p) and we will not get our progress wiped either. Here is how it works: When you enter an adventuring portal, you will be placed on a EU server when you chose “Europe” in the upper right corner of the Glyph launcher (in the upper right corner similar to how Rift, Defiance and ArcheAge work). You will still be able to play on US servers by choosing this option in the Glyph launcher. Or, when in game and already on EU servers, clicking on “join” to play with friends or guild mates. Other than that, nothing will be changed. A little caveat: entering a shadow world currently separates players. Since this is in the “known issues” section, it’s safe to assume that a) they know about it and b) they are going to fix this. ;) 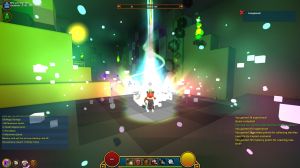 The sky portal (can only be placed in club worlds, so this is where you may find one) will lose its level requirement again. This is one thing I really love because it used to not have a level restriction. With one of the recent patches, a restriction of level 24 (I think) was added which basically locked me out. In case you’re wondering: Yes, max level is 20 in Trove for your character class. However, the stronger the equipment, the more levels are added to your character’s final “level count”. My pirate captain is currently my highest character. She hit level 20 quite some time ago, but her equipment isn’t too strong, so the total is level 22. I wasn’t too worried about that part, since I’ve been doing other things recently instead of focusing on getting her stronger gear. But being locked out of the sky portal was a bit unfortunate.

The build mode got some love. I will have to test it out to see how it works, but being able to place several blocks at once is great! Especially when you’re building a floor in your cornerstone. They also fixed a bug where a block would reappear even though you had just removed it or it would disappear after you had placed it.

Another quality of life change is that you will now not only see dungeons on the compass when moving through the world, but also large dungeons and recipe dungeons. Since you will always get a recipe that you have not unlocked yet when you do such a dungeon, I find them very rewarding and am very excited about being able to find them faster (hopefully).

Deconstructor is renamed to “Loot Collector” (and will apparently also get a different look). The Loot Collector destroys the items you put in there. In return, it collects the skin of the item if you don’t already have unlocked it and gives you crafting materials. By the way, it does not only collect equipment items, but also fish and allies (only put them in there if you have them already unlocked. Otherwise, use them to unlock them on your account, as the Loot Collector will not do that).

Last but not least (for some people, at least), Trove is going to have Gamepad support. I’m not a fan of those, especially not on the PC, but it can be quite comfortable to use sometimes (like the car driving in LA Noire or the game Nidhogg in general). So if you like playing with a gamepad, connect it to the PC and then start Trove – yes, that order is important as the game will otherwise not recognize the gamepad.

One thing I don’t like in the patch notes is that prices will increase for Europeans.

“Pricing has been updated to account for currency conversion rates. This means things will cost more Euros and Pounds.”

Since I would very likely buy a few credits sooner or later anyway, I decided to get them this morning before the price increases. I had a look at the current conversion rate. The credit pack I chose costs $ 20. The Euro price was 15.40 €. According to Google, $20 currently equals 18 €. This certainly explains why they would want to adjust that. As much as I hate to see this change, it is understandable. Of course, I also fully expect the price to be at least about 20 € (because of taxes etc.).