For me, games that interest me start being “worth it” below 15 € if they’re new(ish) and below 10 for older games… very old ones below 5. Don’t ask me why, that’s just an arbitrary number that my brain decided is a good anchor.

First things first: Folk Tale is in Early Access on Steam. It has been in development for a very long time (okay, “long” is subjectively used here) which is also because the developers changed the direction of the game and are making it a sandbox game with editors for us players to use and create our own maps and scenarios.

My readers may remember seeing the topic of “Folk Tale” pop up here from time to time. In fact, it seems that I write about this game about once a year (June 2013, February 2014 part 1 and February 2014 part 2 – and then May 2015 now). The thing is: I actually cannot tell you what has changed in the meantime! I did not have the time to follow its development last year, then I decided to just wait for it to get released and then I got interested in it again this year, but still lacked the time to play with the editor mode. I have been watching the livestreams on Twitch every now and then, but those mostly happen right after I have come home from work and I just cannot concentrate too much at that point and usually just listen to the game’s background music and to the developer’s accent while preparing dinner. :p

Additionally, quite a lot has been added actually and been tweaked with. What I do know is that apart from lots of work on the editor, the old tutorial is gone and a new one is being introduced. You can read more about this in their latest developer blog post.

I have not tried it yet, so I figured when I saw this game is on sale, that I should give the tutorial a try to write about my experience here. You know, just in case you are trying to decide whether to buy it or not and want somebody’s opinion. I am going to warn you, though: My opinion is not meant as a “you should buy it” or “you should not buy it”. Please do not take it as a review or anything of the sort. It’s just my own opinion that you can use to make a judgment of your own if you want to.

The tutorial map has voice over already and it slowly guides you through building a functioning village. I admit, when I first played Folk Tale back in 2013 with the old tutorial I was a bit disappointed. The game I had seen in the tutorial was fine, but when I had first read about the game, I had imagined it to be more similar to Cultures. A gaming series that I will forever hold dear! I spent way too many hours – while studying – playing the game. Okay, maybe Cultures (the first one, not the sequels) was a taaad slow sometimes. ;) Still, I loved the graphics and the game design. So, Folk Tale was good, but did not quite fit that niche. The sandbox direction changed that, though. It feels almost exactly like Cultures and I really love that! 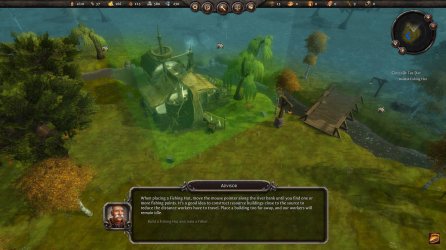 The first thing you do is place a supply waggon, so your villagers have a place to put all their important supplies (the usual: stone, wood, food). After that, you gather a bit of wood and food to get you started. Then you place a woodcutter hut, a fishing hut, a hunter’s lodge and, of course, fields, a windmill and a bakery. Once again, this is exactly what I did in Cultures… or Banished, for that matter.

The soundtrack is really nice to listen to, even for a longer amount of time. I know too many games where the music sounds nice, but the loops are too short and it starts to get on my nerves in no time. With Folk Tale, I can have the game open in the background and just enjoy the songs for a while. Including the birds’ chirping when you’re on a map. ;)

The graphics are more on the comic than on the realistic side and I have to admit, I actually prefer that over the realistic graphics. The voice overs, as far as they are available already, are also really good. Your villagers only have two voices, though: Male and female. I don’t know if more voices will be added. 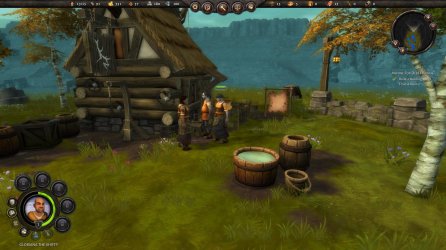 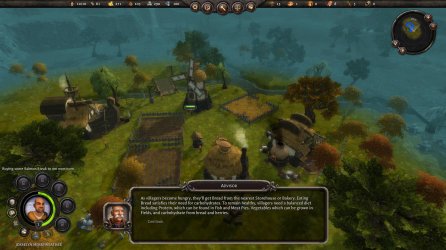 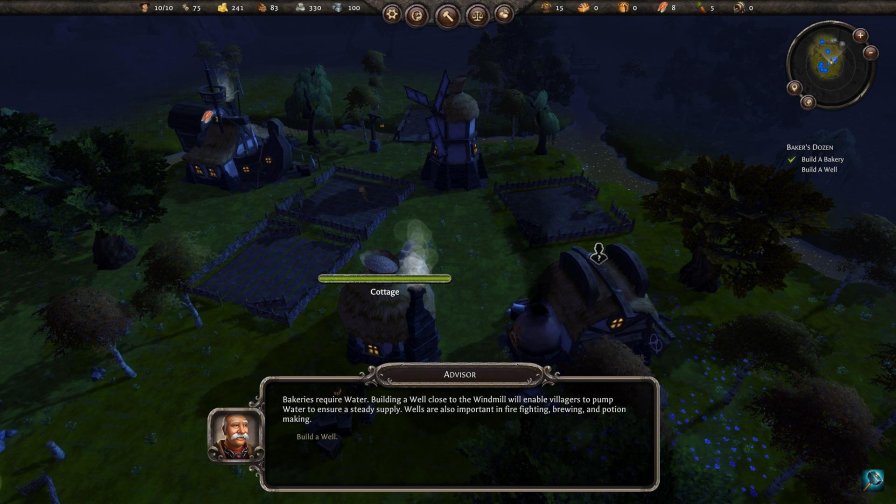 The economy is in there already with chains like fields, windmill, bakery and well as well as a hunting lodge plus a butcher. Villagers produce and use goods and they can be happy as well as unhappy. If they become too unhappy, they will leave the village leaving you with nobody to work for you.

But building and micromanaging your villagers’ needs is not all there is in this game. It is not like Banished where you focus on building with nothing else. In the tutorial, you are soon introduced to pesky kobolds that you need to fight against with your villagers. So be prepared to train your villagers to defend – and expand – their village! This is another similarity to Cultures where you could train militia as well as equip them with certain items (more so in the sequels than the original Cultures game). 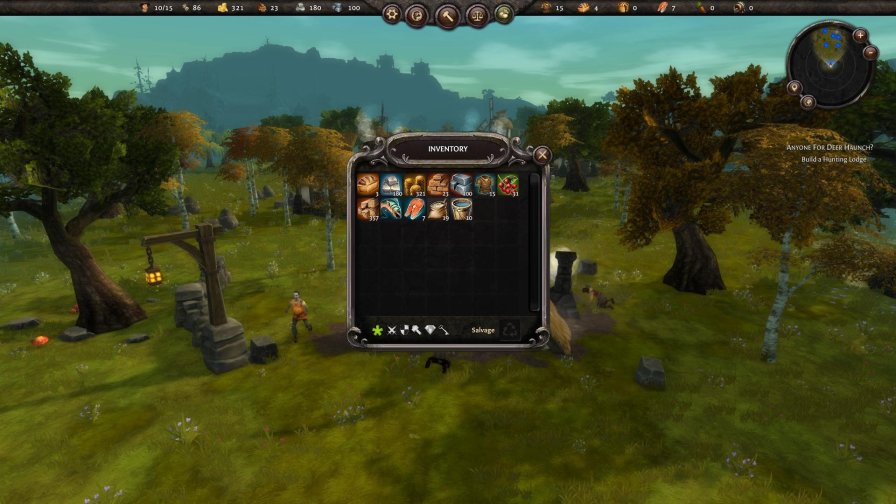 And just after I had typed this and fought against the kobolds successfully, the tutorial asked me to place down a blacksmith. The only problem is: There are apparently more enemies in the fog of war and arrows appeared that shot down my building before it was even built. The resources to build said building were already spent, though. I also then got a message that my villagers were under attack. By clicking on the notification icon, I was taken directly to the action and only saw my villagers walk back towards the centre of the village. I have no idea what attacked them, but thankfully, no villager got seriously harmed either. ;)

Loot window after fighting the kobolds

With not enough stone, I had to find some and ask a peasant to collect it manually since the tutorial has not yet asked me to build a stonecutter’s lodge. Some people may not like that, but I actually do. This made the tutorial far less boring than some “on the rails” tutorials. On the other hand, if a tutorial goes too fast and overwhelms you with information or if the controls are hard to handle, then I also get frustrated easily if something goes wrong in the tutorial.

Anyway, this is enough about the tutorial. What else is there to do at the moment? There are a few maps you can choose with indicators of their difficulty (ranging from easy to hard). I have not tried them out, but the swamp one looked interesting, at least. Well, it’s a swamp region where you can settle with your villagers. Not too inviting, but I still liked the look of it.

Right below the “New Game” button, you can find the editors. You still have the map editor that’s been in the game for a longer time already, and then there is the character designer. The latter is funny to watch, especially with voice animations turned on, but other than that, it doesn’t serve a purpose yet, I think. 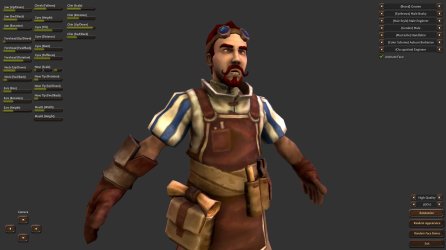 The map editor still looks similar to when I last played with it. However, I am completely lost when it comes to the controls in this editor. Thankfully, Games Foundry (the developers) make heavy use of the Steam forums and you can actually find a subforum for this editor there complete with guides etc. Since I already wrote about this part and do not want to read up on the controls again now, I will not write about this again here. But I do feel the need to add that my old post about this editor doesn’t do it any justice anymore, I think. Just by looking at the kits (each kit contains several items you can place that all belong to that kit’s theme), I can already say that a lot of things have been added. When I worked on a map, there were maybe three kits to choose from. Now I counted 33 kits. Some with only a handful items in there, some with more than 100.

One more feature has been added to the map editor: The workbench! Now this is a feature that I would really love to understand and be able to work with right away! Of course, it took me several minutes now to figure out how to even open this feature. :p As with many other things, there is a guide available from the developers. It is quite easy, actually. You just press “Y” when you’re in the editor. With the workbench, you can create quests and world events, apparently. This will eventually enable all players to create their own maps and missions with goals to reach etc. I am already looking forward to seeing what all the creative people out there will create.

All things considered, I still do not regret having paid money for this game almost two years ago. True, the game is still not finished and yes, I wish it was. :p I am still confident, though, that they will finish this product and that I will enjoy it once it is here, because over the course of the last two years, it has slowly but surely become more and more the game I had at first hoped it would be one day. And once again, the reason why I am confident is that there are constant updates – not just patches that progress the development, but also communication from the developers. You can watch the livestreams on Twitch (or on demand if you missed one) where one of the developers shows you what they are working on and even answers questions that the chat asks (which means that you can ask questions, too!). So if you don’t know whether you want to invest in this game, head over there and watch the videos. You can read through the Folk Tale forums on Steam or read more about the game on the official website.