This weekend, bookahnerk and I had been on a short vacation to Koblenz. The town itself was okayish, but nothing really great. We had primarily chosen it because it’s right next to two big rivers: The Rhine and the Moselle. Unfortunately though, the weather wasn’t too nice either. I can imagine that in summer with lots of sun, the place is gorgeous!

Now you may wonder why I’m babbling about my offline life as I usually don’t do that – but it will become gaming-related in a bit (though offline-gaming, but gaming nonetheless).

On Saturday, we had decided to take a trip to the Ehrenbreitstein Fortress. You can get there by taking the cable car. That probably saved us about trip by foot of about an hour or even more. Also, the view was awesome! The fortress itself was a bit like a maze, at least for somebody like me who does not have the greatest sense of orientation. It was also impressive to look at. Several parts of the inside had different exhibitions (link in German only. Sorry!). One was devoted to the regional wine – unfortunately, the wine tasting was not open. :p Another exhibition was about archaeological findings from the area, some dating back to about 2000 B.C. There was also a rebuild flat (hover your mouse over the panorama to see part of the flat) from when people used to live there in the 50s (post war, that is). This was more depressing than anything else, because as we were walking through the various parts of the fortress, you could always hear – and clearly see – the air dehumidifiers. And yet, you could see, feel and smell the humidity everywhere. This is definitely not a good place to live at (on the other hand, it most certainly was better than no roof above your head at all). And I also do not envy the people working there today.

Ehrenbreitstein Fortress from the other side of the river Rhine

Below the cable car. This is huge! 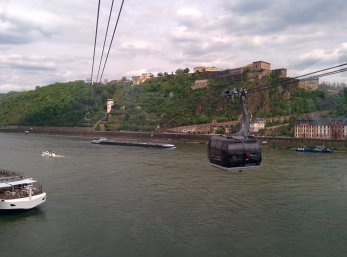 In the cable car on our way to the fortress 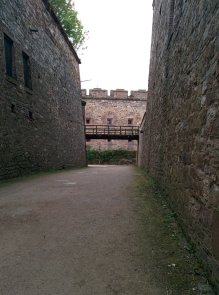 Playing with my camera’s settings in the Ehrenbreitstein Fortress… half a panorama picture. :p

Anyway, the exhibitions and the place itself were still nice and we did not regret taking the trip (did I already mention the cable car with its amazing view? ^^). But now comes the unexpected part. So far, we had seen the history of the place and the region. Then I turned around a corner and stared at a 1,50 m high Playmobil figure. What the… It turns out that Playmobil turns 40 this year and of all the places they could have chosen, a Playmobil exhibition was set up in this very fortress.

I remember Playmobil from my childhood, but I confess: I was a Lego fan! I think it is a bit like the “Star Wars or Star Trek” question with almost everybody having a favourite (Star Trek here, by the way). Also, my parents had gotten Lego for my brother and I got to play with his Lego, too, and then get some of my own and they refused to also buy me Playmobil. I had a few things, but nothing big, from relatives or friends of the family who hadn’t known that we collect Lego instead. :p What I preferred with Lego is that you can build everything that you can imagine. A red Lego piece can be part of a gigantic mushroom, a racing car or a spaceship. A red Playmobil roof will always be a red Playmobil roof. On the other hand, the Playmobil figures, both the humans and the animals, were much nicer to look at, more realistic than the little round yellow thingies that Lego had. I always wished I could combine those two. 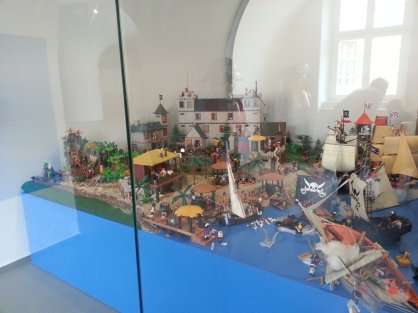 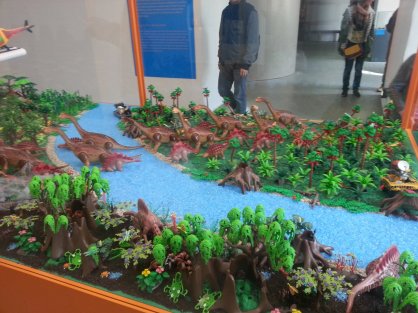 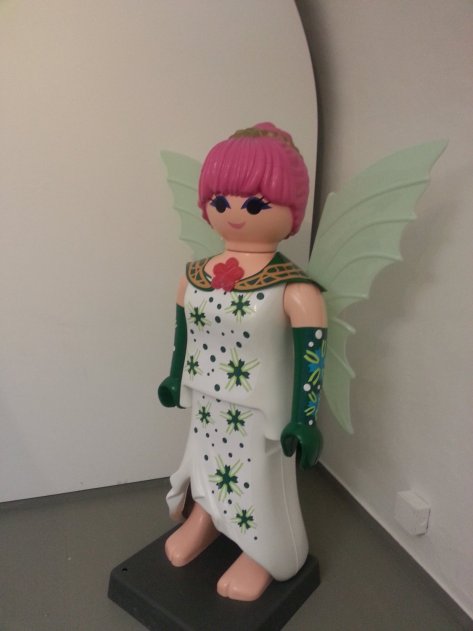 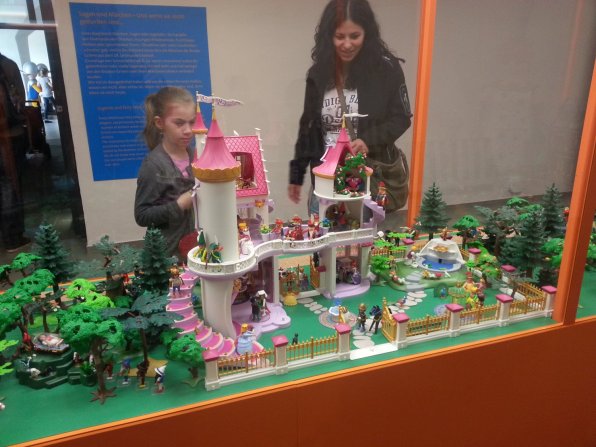 So there we were staring in awe at all the different models, reading about the history of Playmobil. It was certainly interesting and while walking through the exhibition, there definitely was no difference between the children who probably have lots of Playmobil at home right now and us adults who were walking around, pointing at things going: “Oooh, I had that!” or “Oooh, I would have loved to get that if it had been available when I was a child!” It’s just that in the middle of this fortress with its century-long history, it seemed a tad out-of-place to be there. Still, nice! And I like when “gaming” in whatever form sneaks up on us and reminds us that we all like good games no matter how old we get.