Yesterday’s Trove livestream on Twitch brought us some news on what to expect next in the game. I tried to catch and write down all the interesting bits: Dances, new mounts, information on the next new class (the Pirate Captain), the water and underground updates, recent additions to the game and upcoming changes to existing things.

They started by showing dances! Every class will have its own specific dance and the Dracolyte will apparently get two: The Dracolyte’s dragon form has a gangnam style dance.

After that, they showed us four new mounts. The first, the War Horse, was designed by Trion. It leaves little hoof prints on the ground, but seems to be lacking legs… Anyway, interesting dark look there!

The other three mounts were designed by players and will enter the game soon. I remember seeing two of them on the forums and really liked the design, so I’m excited to get them! Scoops is a little ice-cream panda bear. It’s just fitting that you will need cupcakes to make it. The tail is a cherry and it has a spoon in its mouth ready for ice-cream, obviously! So, save your cupcakes if you want this mount, just to be sure you won’t have to spend hours grinding for them (I have no idea how many you’ll need…). 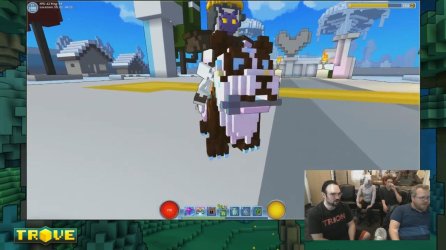 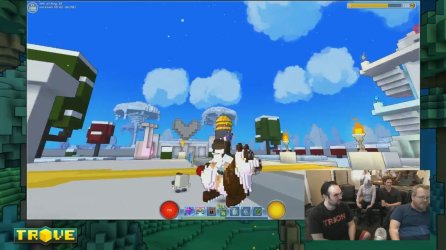 Gadget Cat looks like a robot-y mount, but you will get it from the pirates. Flux was mentioned, but I’m not sure if that was a definite “you will get it for flux” announcement. 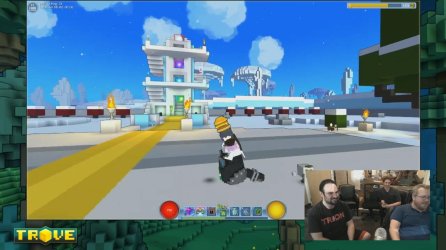 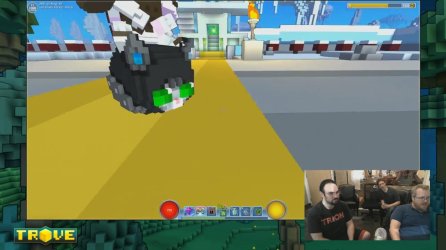 The third is one that hadn’t caught my attention on the forum, but the Shadow Angler certainly looks cool! This apparently will be tied to fishing which is a new profession that we’ll get at some point in the near future. Either way, both fishing and pemblock were mentioned, so we’ll see how exactly we can get our hands on this mount. 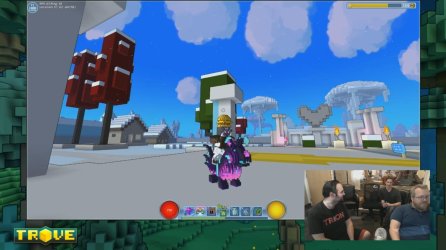 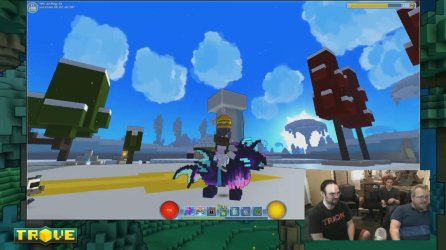 By the way: If you make a costume or a mount and it gets added to the game (you need to build up hype from the player community for that to happen), you will receive 10k credits and 300 codes for the item that you can give away as you like.

They also showed two mounts that were added with the sky update. The Floating Formula is based on the carpet mount and you can get it from Runecrafting, the latest crafting profession added to Trove. The second mount, the Nimble Nimbus, is a cloud-mount. It drops (very rarely) out of crystallized clouds which can be found in the new sky biome. 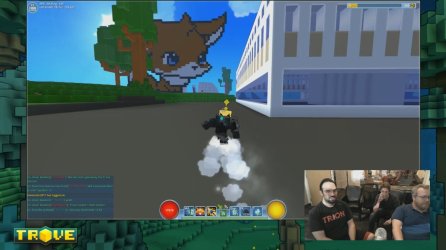 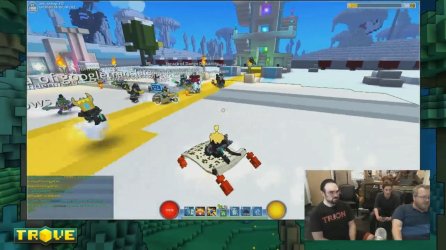 The next update will focus on the water areas. Before they added the sky biome, they had already added the pirate ships where you can exchange glim and flux for allies, mounts etc. But this was just the first step and we’ll get to see more work done in the water area within the next month, apparently. Boats were mentioned in the livestream. The sea water will also be higher with the update. Sea of Regret will probably be raised sooner than Sea of Tranquility when they add boats.

They did not go into too much detail, but we know that they’ll add deep water, boats, fishing and a water-based class, the Pirate Captain. Unfortunately, they could not show the new class yet. The concept is done, but that’s about it, apparently. They did tell us that it’ll use one pistol as its weapon.

They did not stop there with the announcements of what’s coming next. Once the water update is done, the underground areas will get updated as well! Of course, we got even less details about that area, but they could already tell us that we’ll get a complete underground world with mag rails and even caves that are underwater (I guess it’s just very fitting to combine the water and underground systems while they’re at it… :p).