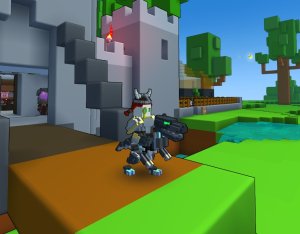 Sometimes, I can’t believe my luck. I had a look at the dev trackers I’m following earlier today (for Guild Wars 2, Trove and Rift) and saw this post where Ocho explains that the Robo Raptor mount in Trove is an exclusive giveaway item they are handing out to streamers in order to help promote them.

I had a look at who was streaming Trove a bit after that. The first streamer with the most viewers was one of those with loud music going on (usually not the gaming soundtrack) and I can’t stand that. Music in the background is fine. But I watch streams to see the game and hear about it or at the very least, hear what the streamer has to say. The second one I clicked on was Sirregular. Exactly the kind of streamer I prefer. The music can barely be heard. ;)

Anyway, he gave away two Robo Raptors today (he has a few more codes, in case you’re looking for Trove streamers where you can win that mount) and guess who won the second code? Yes, ME! I don’t know how much I’ve already won that was Trion-related. Probably too much for my own good.
I jumped right into the game to have a look at this mount. It’s so cute! Probably a perfect fit for when I’m playing my dracolyte (I was too excited to take screenshots, so I didn’t switch my class from knight to dracolyte now).

As it turns out, there was no need for that filler blog post earlier. I could have just waited a bit… ;)

If you want one for yourself, go watch this site. Quite a few streamers put it in their headline if they have a giveaway.