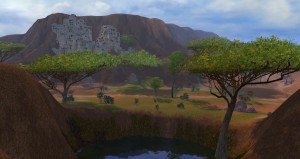 A little information in case you don’t know much about Guild Wars 1: The campaigns are standalone, meaning you can buy either of those and play the game. Each campaign takes place in a different part of the world (called Tyria). The expansion “Eye of the North” requires any of the three campaigns. So, you do not have to buy all three campaigns. You can just buy one or two if you want. However, if you do want to get two, you may as well just buy the trilogy as the price is the same. ;)

Is this game worth buying, especially since it’s several years old already? Yes, yes it is! I have had a lot of fun with it, I enjoyed the storylines, I loved the world and the way it looks. One caveat: You cannot jump in this game. ;)

And if you are worried about not finding any players to play with: 1) There are no dedicated servers, but districts that you can freely choose. 2) Guild Wars has NPCs that you can take with you. The game is not an open world game, but you enter instanced areas where a premade group of varying size (4 to 8) can enter together. If you can’t find or don’t want to find others to group with, you can just take NPCs. The Nightfall campaign also added heroes which are customizable NPCs. You can choose builds and armor stats for your heroes which makes playing even easier. But even with the NPCs, I did not have any trouble playing the campaigns and I really enjoyed the game.