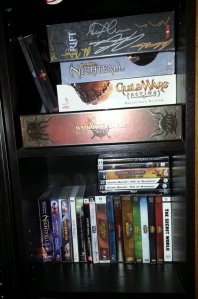 If you’re following Rift, you may have noticed that they’re handling their second expansion, Plane of Water, differently than they did the previous one or than what other MMO developers are usually doing: Instead of giving you everything at once, they are giving us the expansion piece by piece. The reason they stated is that they don’t want their players to wait until every last thing is done and release all features together, but instead, they want to give us the features when they’re ready. The first part was a new crafting profession, Dream Weaving, together with new dimensions. The profession mainly makes items for your dimensions and it can also craft the keys for the new dimensions. The second part was the PvP dimensions feature which got released with the last patch.

The next part will be the four new souls (something like “skill trees” for the non-Rift players) which we were told would arrive some time in May (but not late May!). I’m excited about that, because it means my warrior will get a healing soul and bookahnerk’s mage will get a tank soul. So, we can be an unconventional healer/tank duo!

Don’t get me wrong, I think it is really great to get those features as soon as they are done. I am slowly levelling up Dream Weaving and others are creating their first PvP dimensions. It gives us something to do and I have had those short moments of excitement when logging on after a patch knowing there will be something new in the game. But at the same time, I am not sure I really prefer it over the “traditional expansions”.

I still clearly and fondly remember my very first MMO expansion: World of Warcraft’s Burning Crusade. Bookahnerk, his cousin, a friend and I drove to a city nearby for a midnight sale that a shop was having. We went out for dinner first, then went to that store. They had us wait in front and at first, I felt a bit silly. World of Warcraft was my first MMO and here we were, in front of a store, at night in cold January 2007, waiting for them to open the doors, so we can buy an expansion and it would be very late until we got back home. The employees of the store actually walked along the line and handed out free hot beverages (coffee at 11pm – smart idea! :p).

While waiting there, we started talking with some people behind us. As is usual, we first checked who played which faction (For the Horde!), then we talked about which servers we played on, which classes were our mains and so on. At some point, I had a look behind us as I had not paid attention to the line and I was shocked: The line that hadn’t looked too long in the beginning had grown huge. I had not been able to see the end of it. All those people were there only for one expansion? After they opened the doors, I think it took us 20 minutes until we finally got to buy our expansions.

After that, we still had about a one hour drive back home. I installed the expansion, downloaded another patch and created my blood elf mage at which point I fell into bed. But to be honest, it had not been about playing in the night. It had been about going there, meeting other players, and doing something with friends. This is something that I miss with the digital expansions only. But while it is a nice memory, this post isn’t about digital or physical expansions. It’s about the lack of an “all at once” expansion (or, in ArenaNet’s case, developers considering not doing an expansion at all).

The next morning, I was ready to get into the expansion. Finally! I did not even know where to start: Blood elf starting area with my mage or should I rather take my main character to the expansion region? Or did I actually want to make a short trip to Alliance side and see what the Draenei were all about? Did I want to check out the new crafting profession? There were so many things I wanted to see and check out! I felt the magic again that I had last experienced when I had first set foot into World of Warcraft. The feeling that I always get when I explore a new MMO for the first time.

And this is the reason why I’m sad that we’re not having this with Rift (and maybe Guild Wars 2 as well). As nice as it is getting expansion content piece by piece and not having to wait, it also takes away this magic moment of feeling like the game is brand new again.