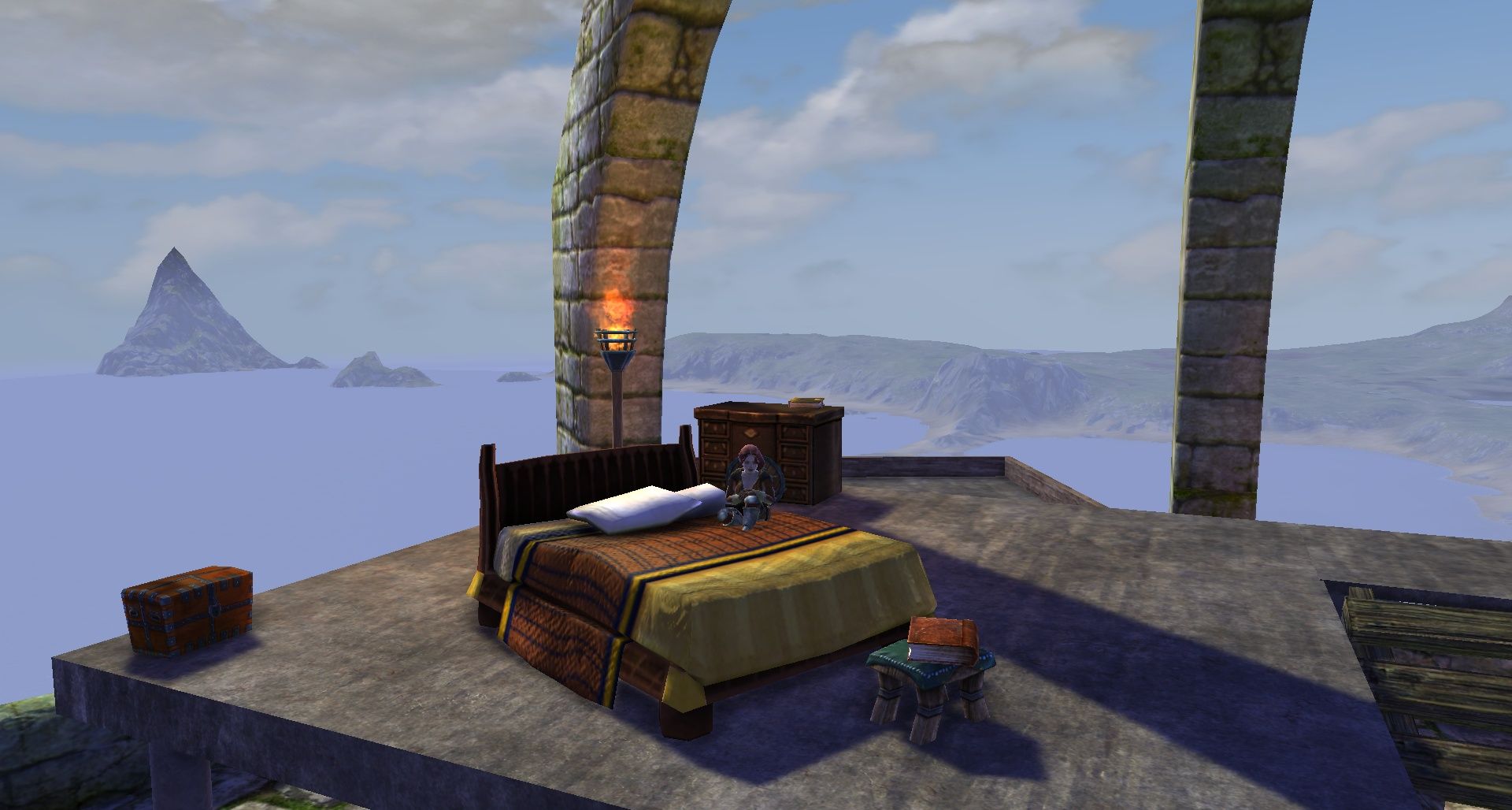 I’ve always had a soft spot for Rift and when I heard it would go free to play, I was ecstatic. I had heard that they added housing (called “dimensions” in this game) and I couldn’t wait to check it out. Going back to Rift was a bit overwhelming. When it came out, I only played it for less than two months and then had a look at it again during two or three of their free weekends. So much has changed in the meantime, but I’m not going to get into that now, as I want to write about the dimensions, one of the features that added in the meantime.

The good news is that you get your first dimension very quickly! I am not sure if there is a level requirement, but if you just play you will get there soon after leaving the tutorial. I spent some real money in order to get a bigger dimension (both in terrain size and in the amount of items you’re allowed to put in there). You can buy them with in-game currency as well. I just figured it’d be more fun for me to buy it now with real money and then spend in-game currency to get furniture, building blocks, etc. to make the dimension look like I want to instead of saving up in-game currency to one day get my dimension. I wanted to get into the action immediately! ;) Other than that, I haven’t bought anything with money. The good thing about Rift’s “item shop”, however, is that the interface lets you buy items both with credits (the currency you get for real money) and in-game coins! So no running back and forth between a merchant NPC and your dimension. Buy whatever you want while you’re building.

I don’t think I’ve ever felt that much at home in an MMO. I did try to get into EQ2’s housing before, but being a free player, I couldn’t sell items on the auction house. So earning coins to buy furniture was difficult. Lotro’s housing is a joke compared to… probably any housing in other MMOs. For those who don’t know: In Lotro, you buy a house and then have certain “hooks” where you can place an item. My current house has no hook at the sides in a room which means that I cannot place my bed at the side. The rooms in my house only have hooks in the middle of the small rooms, so that’s where my bed is. And don’t even think about putting a chair next to a table! There are no hooks that let you put both items next to each other. Thankfully, Rift does not do that (neither does EQ2, by the way). In Rift, you get a little (instanced) place in the world to call home.

You can have two active dimensions at the same time per character (and more if you count your alts’ dimensions which you can work on as well with any of your characters). The first dimension you get is a very small one, but for that, it’s free. There is also no monthly coins fee like other games have. In a dimension, there is usually some kind of building and some landscape around it. Here is an overview of the personal dimensions you can buy. There are also guild dimensions, but I haven’t had that many coins yet to buy one for my guild.

I loved the basic setup of Shoreward Island, so I bought that one for my character. It has a little tower in the middle which is neat, but not too comfortable. The tower is on a small island which gives you a bit more space with trees and sandy areas. I cannot wait to put some house boats on there. But so far, my focus has been on making the tower look more welcoming and cozy. All of that with limited funds. I’m trying to earn coins mostly through fishing, selling rare items that I find and crafting material. You can just use the buildings you have in the dimension and put items in them. If this is all you need, then you will be happy. If you want more, then the game offers you more as well. Have a look at this entry for a few ideas or look at the images below.

As I said, my own dimension is very much a work in progress. The picture on the left shows the top of the tower with a balcony and the beginning of an extra platform. I am not sure I’ll even keep the platform, but I wanted to see what it looks like. I definitely need more building material, as I imagine closing the tower a bit more and inserting that extra room on the platform may look much better in the end than it does now. Let’s face it: This place as it is right now will suck when it starts to rain. ;) The balcony, by the way, consists of a huge stone platform like the one in the middle and ladders acting as railing.

Before there are any misunderstandings: While I am in Rift right now, this does not mean that I left Guild Wars 2 or will leave it any time soon. Both games offer things that I love and I wish there’d be a mix of both. But as long as there isn’t, I will be in Guild Wars 2 and in Rift enjoying the best parts of both games. :o)