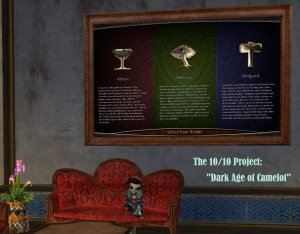 I chose Dark Age of Camelot which was released in 2001 to be the 4th game I would play for the 10/10 project. I played Warhammer Online for a full year when it got released and I’d heard so many good things about Dark Age of Camelot from WAR players. I guess just as much as current Guild Wars 2 players hear about Guild Wars. Warhammer was thought to be DAoC’s successor, at least in spirit. But WAR only has 2 realms whereas DAoC has three. Well, there are many differences between those two games, but the debate of 3 factions vs. 2 factions was and still is pretty popular. I think it’s better with three factions, but unfortunately, a lot of game designers prefer two factions. But well, this isn’t about the question how many factions a game should have, after all. This is about DAoC and that game has three.

Even though it’s a very old game, DAoC still has a sub. You can sign up for the 14 day trial which I did to try out the game. I knew from the beginning that no matter how good the game is, I would not sub to it in the end. There are so many other good games out there where I don’t need to pay every month if I don’t want to, so it’d be a waste of my money. 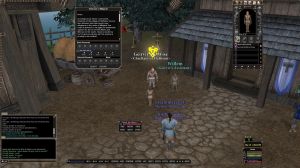 The installation process was fast and smooth. There were no issues at all. After launching the game, the first thing I did was rejoice that it lets me play in windowed mode. I use two monitors and alt-tabbing out and in is annoying. I like to use the second monitor for chatting with friends who don’t happen to be playing the same games (or any games) at the same time. Unfortunately, I soon realized that the window was tiiiiny. And no matter what I tried, I couldn’t resize the window to the size of my screen. I’m going to go ahead a bit and tell you that this is only a problem for the very beginning until you’re finished with character creation. Once you log in with your character, the window changes and had the size of my screen. If I had known that before, it would have saved me 10 minutes of playing around and googling. ;)

The character creation is nice. The graphics show the age of the game, of course. There are lots of races (who belong to three different realms: Albion, Hibernia and Midgard) and classes to choose from. As the game has female dwarves, that’s what I tried out. I just can’t resist. ;)

Within less than 10 minutes of playing, I had encountered a few bugs and problems and that’s when I decided to quit playing. The tutorial is good enough to get you started, but something about the controls and movement was weird. I am not a key-turner and prefer turning with the mouse. Unfortunately, when I tried to do so, I kept looking at one direction and moving to another. At one point, my character got stuck and I couldn’t move at all, no matter what I did. I don’t remember how it got fixed… I think I relogged, but I’m not sure.It was weird, though, as it just happened without me doing anything or moving somewhere and it’s never good if that happens to a player within the first few minutes after starting the game. 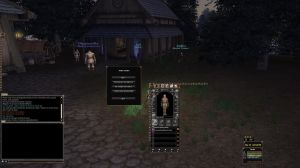 I also wanted to move the different parts of the UI around on my screen and ended up with every single window at the same place – right next to my character at the center of the screen (see the screenshot on the left for an early stage with lots of windows stuck there while I tried to figure out what’s wrong). It took me quite a while and I even installed the game on bookahnerk’s PC to test what’s wrong. We finally figured out the source of the problems. I am a left-hander and I have the Razer DeathAdder left-hand edition. This is an ergonomic mouse for left-hander which, unfortunately, comes with the left and right mouse buttons switched. While I do need to use the mouse with my left hand (trying to use it with my right hand results in very slow movements and a headache plus concentration problems), I do not want to have the buttons switched. I grab a mouse, move it from the right side of the keyboard to the left and use it with my left hand. But that’s about the only thing I change when I’m using the PC of a right-hander.

Now in order to do that with the DeathAdder, I have to use the Windows controls to switch the left and right buttons back. Confusing? Yeah. ;) Most of the games do not have any issues with that. League of Legends is one that blatantly ignores the Windows settings which means that my mouse buttons stay switched. I think Torchlight 2 does that as well. Games like Warhammer Online, Guild Wars 2, Lord of the Rings Online don’t do it and just go along with the settings I chose in Windows. That means that the mouse is in my left hand. I use the physical left button with my middle finger to left-click and the physical right button to right-click with my index finger.

DAoC is special. Most of the controls, movements, etc. listen to the Windows settings (like right-clicking an NPC to talk to them), some ignore it (like moving the camera view with the mouse) and… the UI windows apparently listen to both. I left-click and I can kind of move the window but instead of… moving it, it gets repositioned at the center of the screen as the second command it listens to is “hide the cursor in the middle of the screen and look around with the camera”. – That’s probably a very bad explanation. Bookahnerk explained it a lot better to me once he had realized what went wrong. The bottom line, however, is that whenever I accidentally click on a window, it gets repositioned to the center of the screen and the only way to reliably get it away from there again is to go to the Windows controls, switch the mouse buttons, move the window away again, switch the mouse buttons back and continue playing.

That’s a very long-winded and, as I said, probably confusing explanation for: No, thank you. ;)

The good news about this game is that the starter zone wasn’t empty at all. So it seems that there are still people playing the game (you never know with such old games). But the monthly fee as well as the issues with my mouse mean that I am not interested in this game.