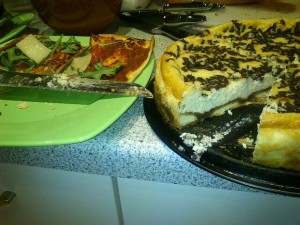 My interests have shifted lately and instead of games, I thought I may write about cooking and baking and share recipes in this blog from now on. For example, I made a tiramisu cheesecake for Easter and this one is so good, I just have to share it with you! Games are boring. Cheesecake is better. :oD

Or, yeah, no. I do like baking and cooking, though and the cake up there is real. I shared that picture on Twitter yesterday and got a few responses from people who said that it looked good and as it’s a really easy recipe, I said I would translate it and hey, there’s a blog here and I can share the recipe very easily through it. I will, of course, not be changing the content of the blog for good. If baking isn’t your thing at all, check back again later as I’m planning to publish a first impression piece of “Dark Age of Camelot”. :)

As I’m not sure how the measurements work in the USA, here’s a conversion chart that looked quite helpful.

You’ll need:
– Ladyfingers (I usually need about 16)
– coffee (preferably espresso and not filter coffee as that is too watery with not enough coffee-taste)
– 400 grams of cream cheese
– 350 grams of mascarpone
– 120 grams of sugar
– 3 eggs
– dark chocolate or dark cocoa powder

If you have one, use a square baking pan. I used a round one which worked just as well in general, but you need to break some of the ladyfingers then, so the whole base of the baking pan is covered. I’ve used a round springform pan with a flat base. Ideally, you can cover the base with baking paper (which I didn’t do, so the base is still on the base. I can’t get it off without breaking the cake apart… ^^).

Whatever you choose, take the ladyfingers and put them on the base of the pan. Break them to fit them into holes. Then pour the coffee over them. I always use quite a lot of coffee, but they can usually soak a lot of it. The more, the better if you ask me. ;) If you don’t like the coffee flavour too much, use less of it. Alternatively, you could also use cocoa instead.

Mix the cream cheese, the mascarpone, the eggs and the sugar. Stir until it’s without lumps. You can also add a bit of Amaretto or whatever alcohol you usually like in your Tiramisu into the mix. As bookahnerk doesn’t like that, I usually don’t add any alcohol in there. Instead, I used a bit of the leftover coffee to add to the mix. Not too much or it gets too fluid. Then pour that mix over the ladyfingers.

Now it’s for you to decide: Cocoa powder of chocolate bits? I’ve put dark chocolate bits on top (or rather, as the cream-mix was really fluid, they sank right in… ^^) or you can leave it like that and put cocoa powder on top once it’s finished baking. I’d just suggest using dark chocolate with a higher percentage of cocoa than sugar or it’d get too sweet.

Put the baking pan into the oven for 50 – 60 minutes. Take it out if it’s getting too dark. I’ve had it in there for 60 minutes. At the end, it looked rather fluid still, but that’s okay. Leave it to cool for about an hour at least. Once the fat in the cake gets cold, it won’t be fluid anymore.

For optimal taste, do not eat it right out of the fridge. It should be at room temperature!