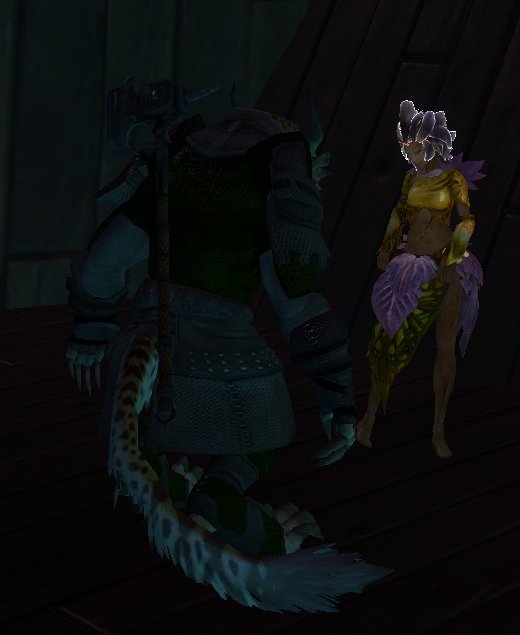 This is another crosspost from Talk Tyria. If you want to add a comment, please add it there. Thank you. :)

The sylvari, together with the asura, are the races we haven’t yet gotten to play either in the closed beta or during the first beta weekend event. They both were playable during some gaming conventions (like GamesCom 2011), so we know they exist in a playable state, at least! But of course, not having been able to play them myself, I am very curious about them. I know I will love asura. There’s just no doubt about that. But what about the sylvari?

For me, they come close to what elves represent in other fantasy games. Think of your standard fantasy settings and now think of how many games include some kind of elves: Lord of the Rings Online, World of Warcraft, Everquest, Rift,… the list goes on. Elves are usually the fragile, elegant, gracious, wise and oooooold race. The sylvari are all of that with one exception; They are a very young race with the oldest sylvari being 25 years old. I’d assume that sylvari will most likely be the race to play when you’re usually an elf-lover because of their looks. But from their personality and their background, they’re rather unique.

They are a tree’s interpretation of humans. (Kristen Perry in Talk Tyria’s lore interview)

Let’s take a look at the sylvari: They can have elf-like ears (pointed, that is, in case you didn’t know). You can find a video showing the early sylvari character customization here (it starts at around 3:30). Their ears are pointed because they’re leaf-shaped. Which, oddly enough, is what Tolkien had in mind for his elves (see Wiki entry above). But it’s not that easy. Sylvari aren’t simply “the elves”. You have to look a bit closer to see the differences between elves (or humans) and sylvari. They are, in fact, plants that were built after humans because the Pale Tree, out of which they were “born”, knows what humans look like and modelled the sylvari after them. ArenaNet had published a blog post about Kristen Perry’s redesign of the sylvari (they did actually look very much like regular elves before).

“You’re five years old. How do you know so much?” (Riona to Killeen in “Ghosts of Ascalon”)

Sylvari have a basic understanding of the world that the Pale Tree gave them. But the Pale Tree only knows what it has seen and what was left written on a tablet in front of it. So of course, sylvari don’t know everything and especially not the finer nuances of relationships, conversations, humour and so on. Some concepts don’t exist for them. Something like “normal” is a foreign word if you haven’t established yet what the “norm” actually is. There are things they don’t know about themselves like ‘how old do they get?’. Will they age or whither?

At first, they didn’t understand humor too well, but over the years, the race has begun to show a sense of fun. (Ree Soesbee in Talk Tyria’s lore interview)

So all in all, we have a race here that is still developing and exploring – not just the world around them but their own existence and personalities. Sylvari are trying to find their place in the world. And they’re curious and eager to learn.

What piques my interest in this race is, apart from the gorgeous and unique looks, the opportunity to play a race that is exploring and discovering the world while I, as a player, am doing exactly the same. I can already see myself walking through the world, through the cities and up to the highest mountains (I always do that in every MMO where I can climb on mountains) and I, as well as my character, will get to see all of this for the very first time. I will figure out who I am in this game just as my sylvari character (most likely a necromancer, thanks to Killeen) will find out more about herself and the world around her. At this point, I also assume that the personal story will reflect that but I haven’t heard anything about their story yet.

I’m going to end this post with a gallery of sylvari. Those screenshots were all taken in Lion’s Arch and you can see that they’re all wearing their race’s clothes with the exception of one sylvari who’s a guard on a tower. Click on the pictures to see them in their full size. The thumbnails don’t always show the actual sylvari. ;)

If you want to read more about the sylvari, check out these links:
Sylvari Lore Interview with Ree Soesbee & Kristen Perry
Sylvari on the official GW2 page
Wiki entry about Sylvari
Angel McCoy on Writing the Sylvari
Dream and Nightmare
Kristen Perry on Designing and Redesigning the Sylvari