Update: The following post is from before the game’s launch. I wrote about this topic again after having played both professions for a bit longer. You can find the post here.

In case you’re new to my blog: I’ve been to the EUFanDay in Brighton where we got to play Guild Wars 2. After our return, we were allowed to write about our game experiences. So I’m not breaking an NDA here by writing about my time in the game and my thoughts about the warrior and the mesmer class. You won’t find any deliberate beta leaks (it’s sometimes hard to know where somebody got their information, especially on the game wikis or the various websites listing the classes’ skills) in our blog! But enough of that. On to the great big horrible dilemma: Should I play a mesmer or warrior (as my main character)?

You may wonder why it’s even a question because those two classes are really different. But now that we don’t have roles like tanks, damage dealers or healers anymore, it’s really a question of which playstyle you prefer. And no, it’s not even as easy as melee or ranged as both the warrior and the mesmer are capable of both. Though it’s physical DPS with a rifle or longbow for the warrior while the mesmer has a scepter, a staff or a greatsword for ranged magical damage. Yes, a greatsword. And since there are no auto-attacks, this means that the mesmer doesn’t actually hit enemies with the greatsword.

What I like about the warrior-class in general is that they’re usually… well, not exactly “easy to play”, but straight forward. They jump right into the battle and are generally not as fast to die than, say, a cloth-wearing mage class. And I do tend to get my character into trouble regularly by running forward without looking around the corner first. ;) So a warrior-class is usually the better choice for me as it leads to less frustration. While I was in Brighton, I tried out the warrior, of course, and the mesmer. So what was it like playing them? I played the mesmer for the first few levels in the Norn starter area. And I played a warrior in structured PvP (level 80, of course) and in a dungeon (level 30). I know this doesn’t make both classes 100% comparable. But I did get a general feeling of how it could be like to play those classes.

The warrior was more or less the standard that you would expect if you have played such classes before. I was told by two others that the warrior can dish out quite a lot of damage when played with a two-handed weapon (I was dumb and didn’t realise I could have two weapon sets once she was set to level 30. This was no upscaling, by the way! We had an NPC that allowed “members of the press” to level their character to 30 immediately, which obviously was too much input at once for me ^^). I went for my usual routine: Sword and shield! Together with traits/skills that gave me health regeneration, less incoming damage etc. I must say, I didn’t die that often during our dungeon run. I also don’t think I was in downed state too often (I didn’t count, of course). All in all, I was happy with her. She jumped into the fight and dished out damage. Occasionally, she could stun the enemy for a second or so (if I remember correctly, that even worked on bosses! What didn’t work was a knockback on some bosses. But my memory could trick me here ^^). What I loved, however, was the active blocking. I could activate this skill and block incoming damage for a few seconds while waiting for my healing skill’s cooldown to run out! Lifesaver in more than one situation, let me tell you. That was just a short overview of what I experienced. It was… as I had expected. A brute playstyle, always in the middle of the fight, never hiding or backing down. Well, dodging away but only to jump right back into the action! Guild Wars 2-style, of course! So yes, I had a lot of fun playing her. You do notice that the combat is different than in a lot of other MMOs. So even the warrior class, as straight-forward as it was, wasn’t boring to play at all. And that was just one weapon set (and just imagine what I could have done if I had realised I could use two weapon sets… silly me). There are so many other weapons to play with – and, of course, other traits and skills to choose. 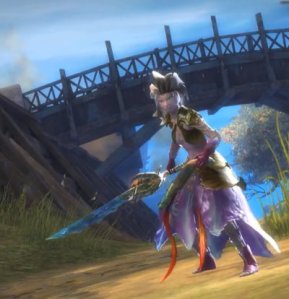 The mesmer, one would think, is the kind of class I wouldn’t enjoy: She’s a cloth-wearing class that has a melee sword in her hand. That can’t go well, can it? But, amazingly, it did! At least for the few levels that I played her! Now she’s not as brutish as the warrior. She’s a mesmer, after all, elegant and skimpily dressed. You never play alone as a mesmer as you can have up to three illusions with you! ;) There are two kinds of illusions: The first one is called a “clone”. Those look exactly like you do. The second one is a “phantasm”. They are see-through and thus, easy to differentiate from you. They also have different weapons than your character (you can find more information on the official website). But you can’t control them in a way a pet class can. Which is good for me because while I like the control, I’m also usually annoyed with the whole micromanagement. You can, however, switch positions with an illusion for a few seconds after calling one (depending on the skill). Now, if your enemy (mostly thinking about PvP here) has you as their target, you won’t just disappear from their target when you call an illusion. However, if you’re in the middle of a fight and somebody else from the other side appears, it will certainly be fun hiding in between the illusions. Okay, I admit, I have no idea how difficult – or easy! – it will be later on once we’ve all got tons of experience under our belt. But I assume it’s great to have this moment of confusion for yourself.

As I said, I played my mesmer with a sword and a pistol. The pistol gave me two skills. One is a shot that gives a debuff to three different targets. Well, it gives three different debuffs, to be more precise. And the other is a phantasm with a pistol. I have to admit, I never paid attention to how much damage each of my illusions did. I only know that I was intrigued by this playstyle. It’s certainly not comparable to how a warrior jumps into the middle of a fight and still survives due to brute force. The mesmer relies on tricks (switching positions, going invisible for a bit, teleporting, etc.). The end result, however, is the same: Both attacked in melee, which I love doing, and survived, which is a nice side-effect, isn’t it? ;)

So, which one does win? It’s hard to say right now. I know that when I first heard about the mesmer, I was intrigued because it reminded me of my frost mage back in Burning Crusade’s WoW. But after playing the class, I know it’s even better. It’s a mix of that frost mage (playstyle-wise) and a melee class (if played with a sword) and it almost sounds like it was made just for me! I’ll definitely also create an asura warrior. But I guess the asura mesmer will be my main character. I like melee but I’ve been looking for a class like that frost mage (back in BC, the playstyle in PvP did change since then, unfortunately) and I’m just excited about trying out the mesmer and I do hope this class will give me what I’m looking for… which is a melee-capable class with lots of annoying tricks up its sleeve (and no, thief is out of the question because I’m too impatient for stealth).