Cross-posted from Talk Tyria. As always, please go there if you want to comment on the article. Thank you. :) 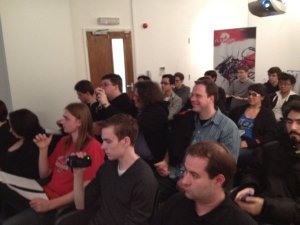 As I said in my last entry here on Talk Tyria, Nerdy Bookahs had been invited to the EUFanDay that took place this Monday and Tuesday in Brighton. I was the one representing our blog there (a first post about this went up on our blog. It includes a growing link collection for write-ups etc. from the EUFanDay). As part of this event, we got to talk with some of the developers about Guild Wars 2. Or rather, each of us (the invited fan sites) were allowed to ask one question. I’d collected a few more than just that, so that was a bit sad. Fortunately, I didn’t have as many questions as some others, so the disappointment from those who sent in their questions wasn’t that big on my site. ;)

Tasha Darke and Dutch Sunshine have just posted the transcription of the interview. You can find the first part on her blog and the second one on GuildMag.

As those two already transcribed the interview, I will refrain from doing the same. It’s a lot of work and time, after all (thank you for doing that, by the way!). Time which I rather want to spend on ranting and musing about which we got to know from the interview. ;)

I’ll assume that you’ve read the interview now. But I’ll try to write in a way that you know what I’m talking about even if you haven’t. ;) As I said, we had about 25 people (give or take 3) who all asked one question. So the questions were very mixed. We had a few about PvP and what we now know is that ArenaNet want to have structured PvP as an esport. We don’t know anything new about the observer mode but it’s probably a safe bet that they’ll do everything they can to include this as fast as possible post-launch because it’s needed if they want it to succeed as esport. Other than the observer mode, I don’t see a reason why they shouldn’t succeed here. Every character in structured PvP is the same level, has the same quality gear, access to all skills, etc. They also want their structured PvP (and WvW) to be easy to understand and get into. Overflow shards will also allow you to join structured PvP matches (but not WvW), so even if your server is crowded, you can still join those PvP matches. From the interview, I take it that we can expect some kind of announcement about additional PvP maps before release. They mentioned one that has lots of underwater combat and a pirate ship! Another one is supposedly going to make GW1 players feel nostalgic.

On to another area of the game, the community. It was stated again that there will be no restrictions or penalties for switching guilds. You’re supposed to be able to switch whenever you feel like it. How that works in the end remains to be seen. It requires us to let go of what we’ve gotten used to (it really shouldn’t surprise us anymore as it’s not the only thing that will work differently than in previous MMOs). Another thing that a lot of people are worried about is how the fansites will survive (I think there was a huge discussion about this on guildwars2guru) when Guild Wars 2 will have official forums. Regina said that while they will have less time, they’re still going to read the inofficial forums, fan sites etc. and that there will, of course, be people who’ll rather post on non-official sites than on the official ones out of fear of being censored on the official forums. If you ask me, I think it’ll be like we have it now: There isn’t just ONE fan site and ONE blog out there. We have so many different ones and so far, there’s space for all of them. Because people have different preferences and thus, will want to post on one site but not on the other. The official forum will just be “one more” site that you can go to but it won’t be necessary. If all you want is get news about the game and chat with a few friends, why not do that where you’re currently doing it already? There’s no need to move on to the official forums as ArenaNet won’t ask us to shut down our fan sites or blogs.

Something that disappointed me greatly were the answers about the customization for female humans mostly. ArenaNet want them to be idealized and beautiful. So no wrinkles, scars, etc. From what I have seen in pictures (or the customization videos from GamesCom), it looks like all female humans are dolls. I’d really like there to be the option to have different faces (I’m thinking of Warhammer Online here which made it possible to add scars. We’re fighting dragons here, after all! It’d make sense to have scars!). But oh well, it can’t be changed, I guess. And since I want to play Asura and Charr anyway, I don’t really need to worry about the humans. The thing that then made me squeal again was when they mentioned that there will be dances. I feared that we wouldn’t get those (again, like in Warhammer Online where I first realised that I really love fluff like that and I miss it when it’s not there… just like minipets, emotes,… – thankfully, Guild Wars 2 will have all of those!).

One last thing that I want to comment on is the question by gaming-insight.de about where to get the “good items” (that is, the high-level armor). ArenaNet’s philosophy about how we should be playing the game is “do what is fun for you”. In other words: If you enjoy WvW, you should be able to get the gear from WvW. If you enjoy crafting, you should be able to get similar gear with similar stats (in power) from crafting, and so on. However, certain looks will only be obtainable through WvW, crafting etc. So that when you see a player in a certain armor, you know they have done WvW a lot. But they’re not more powerful than you are when it comes to the stats they have on their armor. If you ask me, this is a great direction and one they’ve already done in Guild Wars 1. There’s nothing wrong with having bragging rights. But make them about the look/uniqueness of the gear and not about the stats on the gear! This will make the game much better than handing out gear with much better stats because it means that the whole game world remains open to you even if you decide to ignore a certain part.