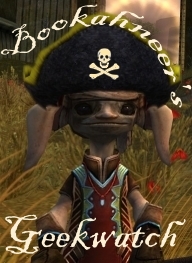 Welcome to today’s Bookahneer’s Geekwatch! The place about LotRO, Guild Wars 2 and any other interesting news related to gaming.

Today, I’m starting with two pieces of bad news. Massively reported about Gameforge laying off 100 employees. I’d written about their upcoming browser game Star Trek – Infinite Space before and it seems that with a bit of (more?) bad luck, this game will never see a release day. Gameforge is also publishing the European version of Wizard101 – which probably explains why I had trouble logging into my account the last time I wanted to play. I’d gotten redirected to the EU site and my account didn’t exist there. Very annoying! And then, Lego Universe will close at the end of January, 2012. I’ve never played it. I just liked the general idea of it.

I’d written about Star Corsairs in my last blog entry. Its developer is contemplating and openly talking about how to get more players. I think it’s interesting to follow an indie developer on his quest to get to a healthy population of active players in their game. And no, I’m not getting paid by him for mentioning his game twice in a row. ;) I’m just fascinated with “behind the scenes” stuff, so to say. You’re usually not told about numbers or worries of the people making games.

Now, back to Lotro. I haven’t had much time to play lately with my new job and Nanowrimo. The last time I did play, though, I finally finished that annoying “Tracking an old goat” deed (or whatever it’s called). I had unfortunately finished the main quest before doing the other quests. I hadn’t handed it in but now the quest giver had the orange ring above his head (indicating I have a quest I can turn in) prevented me from seeing any new quests he might have to offer to me. I finally found the coordinates for those quests (scroll down a bit). Once you’re at the exact location, click on the quest giver and you can accept the new quest.

Also, DocHoliday posted about the recent LUA updates. Finally! I’ve gotten so used to my few plugins already that I really missed them. If you’re interested in Lotro plugins and how to get them to work, check out my Lotro plugin guide. DocHoliday also gives an explanation of how to use them.

Last but not least, we finally heard something from Guild Wars 2 again. And it’s all over the Twitterverse and in blogs. I’m sure you’ve seen the posting linked to in several places already. But eh, too bad, you’ll get the link posted here again. ;) Jon Peters talks about engineers, rangers’ pets and cross profession combos. I can’t remember… are rangers going to be able to give a name to their pet? If yes, I wonder if you can, for example, give your raptor a name (no idea if there are raptors in the game. I’ve just had one in WoW and when I think of rangers/hunters and their pets, I immediately think about raptors ^^), then switch to cat and bear and when you take out the cat and choose the raptor again, it will still have the same name? Hmm… that’d be cool.