I’m finally finished with my exams and thus, with university. Now, this blog isn’t about my private non-gaming life, so I won’t talk about that anymore. This weekend, however, I told myself I’d spend it gaming. Whenever I thought about it in the last 8 weeks (yearning for the carefree weekend without worrying about passing and, of course getting “very good” grades), I saw myself playing Rift. At some point during my exams, I left my kin which surprised me because I hadn’t realised that this was one of the main reasons why I hadn’t enjoyed myself in LotRO anymore. I finally launched Rift today and spent about an hour in there*. I reached level 29 today. Go me, right? But… something isn’t right. I don’t want to look for a guild, I don’t want to look for a community. I found my niche in LotRO. After playing it for more than 2 years (I think… not sure, actually), I finally have found a corner that I’m happy in. We’re 4 people playing and we won’t be able to do more than our 3 man instances (which we haven’t done yet). But I’m happy and haven’t had that much fun in LotRO in a long time. I can play in unconventional ways, I’m not expected to know everything and the others are very patient and will let me practice tanking with them (I love playing tanks but I’m too insecure to try it out with people I don’t know which is why I’ve hardly ever played tanks). 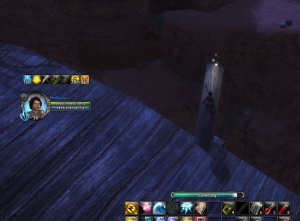 When I first started playing LotRO, I’d been fed up with World of Warcraft. In WoW, it’s all about playing well, knowing your stuff, having the best gear available… – well, if you play the game, you probably know what I mean. I was so happy to finally find a game where it’s not about the “gear spiral”. Where it’s not about hunting after the latest and best gear set. Where the world, the atmosphere, silly things like playing instruments and decorating your house, are more important than a perfect build and the best gear. Boy, was I wrong. You will find elitist people and elitist opinions in every game. I know that now. There were even elitist PvP-people I met… in LotRO! That one person came from Warhammer, apparently, and talked like he knew all about PvP because he’d been in WAR and well, if you’ve been there, you know what real PvP is and you’re a star… or something like that. ;) And of course, PvP is serious business like in every game (don’t get me wrong. I love consensual PvP, preferably in scenarios/warfronts where the main objective is playing together as a team and having objectives and not just killing the other side).

What I’ve learned by now is that I am not the average gamer. When somebody tells me that I need to get certain gear or need to do certain instances first before I can go to other instances, I just lose all interest in the game. It stops being fun. I might “hinder” myself now and I might slow down or even stop any kind of progression my character could ever see. But I am happy in LotRO the way I play now! I’m doing deeds that I’d wanted to do for ages and never felt like doing. Now I am doing them because I remembered that I want to do them. I don’t have to do them. Big difference for me.

On the other hand, it also means that I probably won’t continue my sub for Rift after this month. And I’m actually sorry about that. I really love that game and I think they’re doing a lot of things right. Even if they’re having the gear spiral as well (at which point I just want to curse at ArenaNet for being – in my opinion – STUPID for changing their “no better gear at max level” from Guild Wars to “yes, please, get better gear!!!” in Guild Wars 2. WHY? *sigh*), I saw myself easily finding a good niche for myself in Rift. Hunting after every artifact – or collecting them and selling them for lots of platinum! ;)

But it’s lacking one thing: Good friends. And that’s probably why WoW is still the MMO-king. We, the WoW players, usually know lots of friends who play the game as well and why should we leave it and find new friends elsewhere? In my case, it’s LotRO. Without that one good friend, I wouldn’t have stayed in LotRO. I wouldn’t have bought the lifetime account when it was offered to me by Codemasters for 110 Euros. And now, she and her initiative to leave the kin made me fall in love again with the game.**

By the way, in case you’re playing LotRO on the European servers and are looking for a social/casual kin to join: http://childrenofthain.net – We’re looking for new members who are also comfortable in a small social niche. ;)

* It’s funny how sloooooow my character moves around after playing LotRO. I first thought it must be some kind of bug but it isn’t. It’s just slower moving around. Funny how your mind gets used to a certain speed in another MMO.

** If only their housing wasn’t utter crap. Hooks? Really? No way to place a chair next to a table? What were you thinking when you implemented that piece of disappointment?

Edit: WordPress spell-checker wanted to change “objectives” into “goals” or “aims” because objectives is a “complex expression”. Really? O.o (I’m not a native speaker as my readers probably noticed… so this sounds just weird to me)